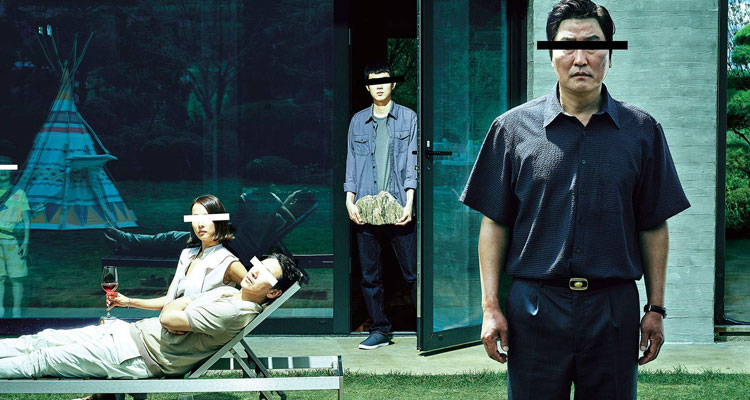 The Plot: In a poor part of thriving metropolis Seoul, Ki-taek (Kang-ho Song) lives with his wife Chung-sook (Chang Hyae Jin) and grown-up son Ki-jung (Park So-dam) and daughter Ki-woo (Choi Woo-shik). They scrounge a living folding pizza boxes and piggyback on wi-fi connections. They’ve never known a life of luxury… until now. Ki-jung gets an opportunity to pose as an English teacher for the affluent Park family. Faking his qualifications, he works his charm on the lady of the house Yeon-kyo (Cho Yeo-jeong), husband Dong-ik (Lee Sun-kyun) and their two children. They buy the subterfuge, so in comes Ki-woo as an art teacher. Their parents follow not long after, so that the Kim family have gone upmarket and inveigled their way into the lives of the Park family and their designer house. That’s when the games really begin…

The Verdict: The winner of the Palme d’Or at last year’s Cannes Film Festival, Parasite finally arrives on these shores under the weight of expectations and considerable Awards Season buzz. It also caused an upset at the Screen Actors Guild Awards, seeing off stiff competition to win an award for the best ensemble cast. For once, here’s a film that is actually worthy of that buzz and delivers on its promise to entertain, thrill and inform audiences. It could only have come from the mind of Bong Joon Ho, the versatile South Korean director who has comfortably moved between genres. From monster movie The Host to character drama Mother and the apocalyptic thriller Snowpiercer, Parasite comes across as a summation of themes that he’s been collecting over the years. The contrast between the haves and the have-nots, how good people can turn bad when pushed and the family unit trying to hold itself together in challenging circumstances.

Parasite is one of those films best viewed with only a basic plot outline, as it then diverges into the kind of narrative territory that would involve spoilers. Bong Joon Ho demands your silence, for there are many twists and turns to this wildly entertaining film. It’s enough to say that all is not as it seems. There’s a well-orchestrated series of events in the Park family house which wrack up the tension to Hitchcockian levels. After the build-up of pressure, Bong Joon Ho lets loose and the film marks out its own territory in the home invasion stakes. There’s an underdog element to the storyline which is wickedly subversive. The destitute Kim family are no pushovers. While they live on the poverty line, they’re also smart and resourceful. When they see an opportunity, they grab it with both hands and wring it until it’s used up.

There’s a perverse kind of joy watching the Kims convince the Parks that they’re highly qualified professionals. Like a parasite, the Kim family attach themselves to their somewhat navel-gazing hosts. The Parks have it all and nothing much seems to bother them. ‘They are nice because they are rich’ says Chung-sook at one point. They’re also blissfully unaware of what’s happening in their house, as they seem more interested in their young son’s burgeoning art skills (hilarious) or their clingy teenage daughter who takes a shine to Ki-jung. The upstairs-downstairs element is the film’s most engaging aspect, but Bong Joon Ho isn’t satisfied to leave it at just that. He introduces other elements that suggest that the Kims aren’t the only parasites here, then plays with audience expectations as to what might happen next. Alfred Hitchcock and Michael Haneke would be proud with all the twisting of screws.

Parasite is a fascinating, talking-point film that deserves a wide audience. It skillfully blends mainstream thrills and arthouse commentary, the kind of foreign language crossover film that follows in the acclaimed footsteps of Amelie and Crouching Tiger, Hidden Dragon. At the epicentre of this carefully calibrated storm in a teacup is Bong Joon Ho, whose direction is masterful. Apart from some slightly grinding plot mechanics in the third act as things come together, he shows a firm grip on the story, characters, their situation and their environment. He also shoots the film with a nervous energy that might take the story in any direction. This Parasite might just burrow itself into your mind and make a home there. Go see.