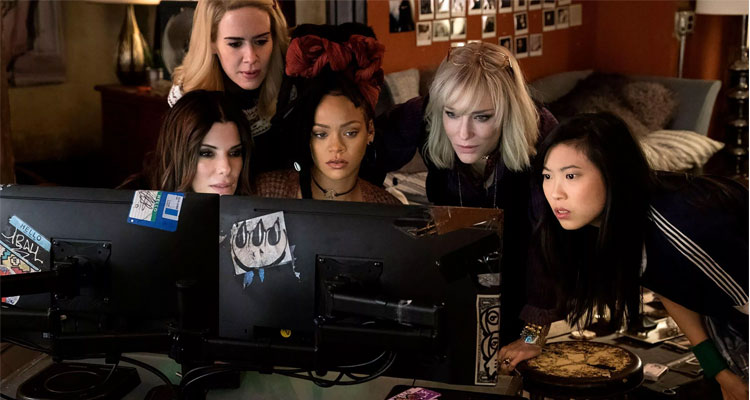 The Plot: Debbie Ocean (Sandra Bullock), sister of Danny, is out on parole. Snitched on by Claude (Richard Armitage), she’s out for a revenge of sorts. But her main goal, which she has spent over 5 years planning, is a new heist: to steal a $150m piece of jewellery that is locked in a vault. With the help of buddy Lou (Cate Blanchett), she approaches fashion designer Rose (Helena Bonham Carter) to drape the jewellery over the swan-like neck of starlet Daphne (Anne Hathaway) at the world-famous Met Gala in New York. She puts together the rest of the team – hacker Nine Ball (Rihanna), jewellery expert Amita (Mindy Kaling), fence Tammy (Sarah Paulson) and con artist Constance (Awkwafina)…

The Verdict: Ocean’s 8 star Mindy Kaling recently called out the dominance of white male critics in failing to appreciate Ocean’s 8, which has got decidedly mixed reviews. She does make a valid point about this, given the increased focus on diversity in the film industry. However, it’s also a smokescreen to hide the fact that Ocean’s 8 isn’t all that good. A while male like this one can certainly appreciate female-led films like the hilarious Bridesmaids and the fabulous Wonder Woman. They were fine, well-written films, whereas Ocean’s 8 often struggles to get past its basic set-up and frequently sputters into flight.

There’s a great idea at work here, taking a gender spin on Steven Soderbergh’s trilogy of Ocean’s films that ran from 2001 – 2007. Debbie is very much in line with her brother Danny – a charming con artist who plays the game with knowing ease. The crew that she puts together are a rogueish but decent bunch. Apart from Lou and Rose, they mostly exist in footnotes to the story and aren’t given much in the way of character development. The script, by director Gary Ross and Olivia Milch, gets to the heist straight away before meandering off on pointless subplots like the one involving Claude. Then there’s the third act, in which James Corden’s insurance investigator appears to have wandered in from a different film. It’s all very so-so, with flexible morality the order of the day.

That’s not to say it’s all bad. The cast clearly had fun making the film and it shows. Bullock gives a sense of purpose and inner strength to Debbie while drawing on her connection to George Clooney for added poignancy. Blanchett is solid as the reliable right-hand woman, Bonham Carter just about convinces with her Irish accent and even Rihanna manages to be bearable. Hathaway also has a ball as a narcissistic celebrity who is smarter than she looks. It’s bright, breezy and occasionally funny. However, there’s a definite sense that this film could have been something much more, if the script had only been sharper. Less of the con and more of the characters – particularly with a great cast like this. Despite the best efforts of its cast, Ocean’s 8 is something of a con job.