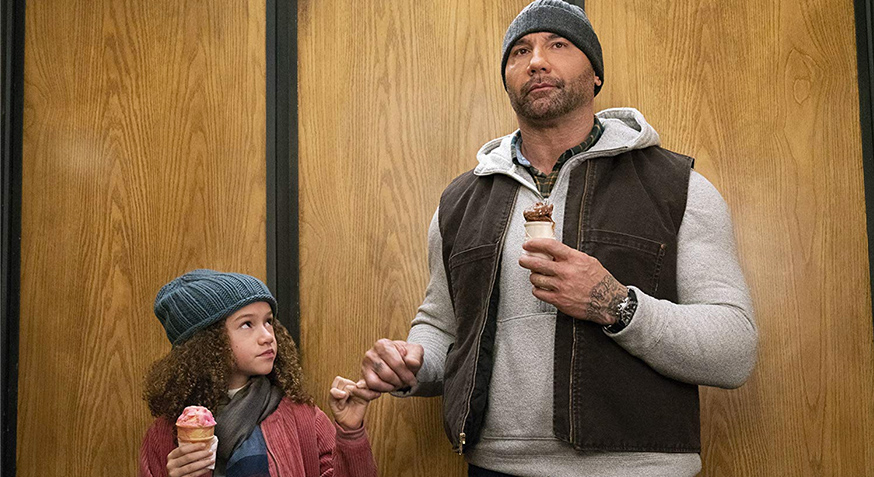 In short: Daffy but amusing

Directed by Peter Segal. Starring Dave Bautista, Chloe Coleman, Kristen Schaal, Parisa Fitz-Henley, Ken Jeong.
The Plot: Former Special Forces operative JJ (Dave Bautista) is now playing spy games for the CIA. There’s something of a blunt instrument about him, which does not go unnoticed by his irritated boss David (Ken Jeong). He lacks the finesse required for spying, messing up an undercover arms deal in which a plutonium core goes missing. He’s re-assigned to surveillance work with quirky tech colleague Bobbi (Kristen Schaal). Their job is to monitor mother and daughter Kate (Parisa Fitz-Henley) and Sophie (Chloe Coleman) until they make contact with a relative, who is involved with the missing plutonium core. However, 9-year-old Chloe blows their cover and uses her influence to bond with JJ and learn about what’s going down…The Verdict: Originally slated for release last summer, My Spy has finally swaggered its way into cinemas. Not with a big bang but an audible explosion. While the phrase ‘much-anticipated’ can’t be bandied about for this family spy caper, it wears its big heart on its sleeve and runs with it to amusing effect. The daffy plot, by brothers Erich and Jon Hoeber, revolves around a tough guy laid low by a little girl who is noticeably smarter than he is. Having written the senior-focused spy movie RED, the Hoebers have dialled back the age of one character to a young girl to make it more of an unlikely buddy film. The inexplicable sight of a hardened but clumsy CIA agent being outsmarted by a girl talking her way into a stranger’s apartment is something we can all get behind. Right?

Sort of. It depends on how much an audience buys into the concept and can overlook the various plot holes and the unlikelihood of it all. It’s a cousin of Luc Besson’s Leon – and a distant one at that. Dial down the violence, a histrionic bad guy and the revenge plot and replace it with cuddly family hi-jinks and you end up with My Spy as JJ bonds with Sophie and learns a thing or two about getting in touch with his emotions. A plot like that also depends heavily on the actors selling the performances. Fortunately for director Peter Segal, he’s on to a winner with the double act of Dave Bautista and Chloe Coleman. Bautista can do both the tough guy act and the comedian very well, so he maintains his composure – and his character – as he suffers all manner of awkward situations. Coleman is a delight too, selling the smart kid act with aplomb. The duo just about keep the film afloat.

There are two films at work here – a moderately aggressive action film and a cutesy surrogate parent film, hence the harder 12A rating. Americans may not notice so much because they’re inured to it, but from an international perspective there is a slightly worrying amount of gun play on display here for a supposedly family-friendly film. How these two films gel together is a source of friction as the story moves away from the bad guys and then returns to it – just in case we’d forgotten amidst the ice skating, ice cream and dinner dates. At least the bad guys are properly bad rather than evil, sneering property developers trying to knock down an orphanage or whatever usually counts for villainy in a film of this type. My Spy is fast, breezy and doesn’t overstay its welcome and should keep families entertained and amused. Just don’t expect to remember it the following day.