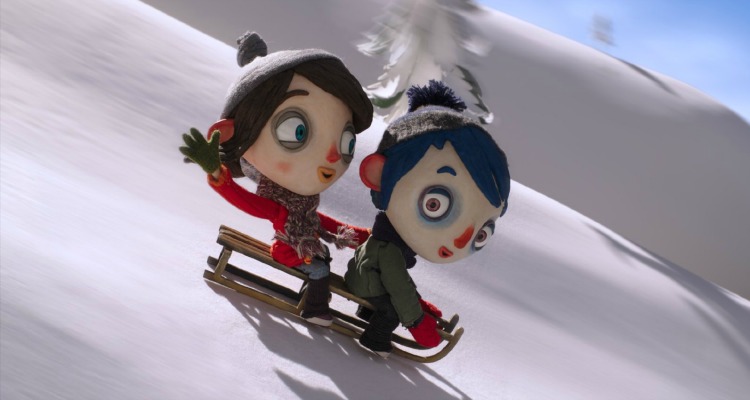 My Life as a Courgette

MY LIFE AS A COURGETTE (Switzerland | France/12A/70mins)
Directed by Claude Barras. Starring Gaspard Schlatter, Sixtine Murat, Paulin Jaccoud, Michel Vuillermoz, Raul Ribera
THE PLOT: After the sudden death of Courgette’s (Gaspard Schlatter) mother, the nine year old boy is sent to live in an orphanage with other children who have tragic lives. Courgette quickly befriends Simon (Paulin Jaccoud) and develops a crush on the new girl Camille (Sixtine Murat). With the help of his friends, and Raymond (Michel Vuillermoz) a police officer he has befriended, Courgette begins to overcome his tragic past, and make a new future.
THE VERDICT: ‘My Life as a Courgette’, which first screened at Cannes 2016 in the Director’s Fortnight sidebar, is the first stop motion animated film from Swiss director Claude Barras, based on a novel by Gilles Paris called ‘Autobiography of a Courgette’.
A young boy with wide eyes and blue hair, Courgette is charmingly and emotionally voiced by Gaspard Schlatter, who brings depth and heart to the character. The rest of the child actors, including Paulin Jaccoud and Sixtine Murat make these idiosyncratic and warm characters come to life. The same can be said for the adult cast, which includes Michel Vuillermoz, Natacha Koutchoumov and Véronique Montel.
The screenplay was adapted from Paris’ novel by Morgan Navarro and Germano Zullo, with extra work done by the acclaimed writer of ‘Girlhood’, Céline Sciamma. The team have made the story of Courgette a charming and warm one; it would have been so easy for this story to become one of loss and despair – and these notes are certainly hit throughout the film – but the entire film has a feeling of hope and humour, especially when these 9 and 10 year old kids start asking one another about sex, in all their innocence.
Director Claude Barras has created a beautiful world in ‘My Life as a Courgette’, with everything being ever so slightly off kilter, be it in size or colour, but backs this up with strong performances from the voice cast that add heart to this odd looking but charming little film. With a running time of just over an hour, ‘My Life as a Courgette’ does not outstay its welcome, but has plenty to say on the nature of hope. Stop motion animation is always beautiful to watch on screen, and this film is certainly no exception, with the physical animation making this story feel even more real.
In all, ‘My Life as a Courgette’ is a beautifully animated, small story that has strong performances from the voice cast. The film has tons of heart, filled with charming characters and a strong message of hope for the future. A film that has gained popularity with word of mouth, this is one for adults and kids alike.
RATING: 4/5
Review by Brogen Hayes