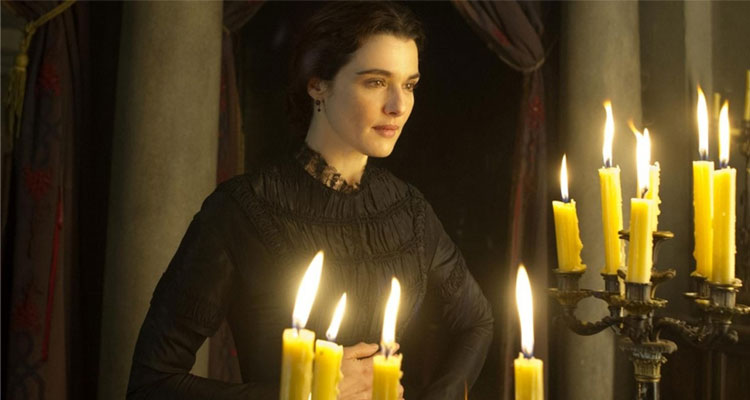 Movie Review
MY COUSIN RACHEL (UK / USA, 12A, 106 mins)
Directed by Roger Michell. Starring Rachel Weisz, Sam Claflin, Iain Glen, Holliday Grainger.
THE PLOT: Philip (Sam Claflin) has been raised by his cousin and guardian Ambrose on the Cornish coastline, along with his godfather Nick (Iain Glen) and his daughter Louise (Holliday Grainger). Ambrose goes away to Italy, where he falls under the spell of Rachel (Rachel Weisz). As the letters arrive from Florence, Philip becomes distressed at the news within. It appears that Rachel has bewitched Ambrose, sending him to an early death. When Rachel comes back to Cornwall to claim her rightful inheritance, Philip chafes at the idea. He makes her wait and acts in a cold manner towards her. Yet, the Cold War between them soon thaws when Rachel uses his charms on him too. Is Rachel a black widow seeking her next little fly… or is she just a woman making her way in the world?
THE VERDICT: Adapted by director Roger Michell from the 1951 Daphne Du Maurier novel, ‘My Cousin Rache’l is an intoxicating story of love, passion and the legacy that people leave behind. Very much a Du Maurier story then, as it draws you into the complex relationship between its main characters while keeping a tight grip on your emotions. This particular story is a period piece, but it wouldn’t be hard to imagine it working in the present day either.
Love can be an obsessive experience of losing control in any age, with the power to either lift people up or destroy them internally. Du Maurier clearly understood that and ‘My Cousin Rache’l is one such story of crazy love. The gradual building up of the relationship between Philip and Rachel is subtle, with Michell hinting at an instant attraction, even if Philip bristles at Rachel’s mere presence. As the story develops, the characters become more entwined with each other. Yet, Michell leaves some elements open to interpretation so that we never really perceive Rachel as being manipulative or evil. She’s just making the most of her situation as a widow.
That open-ended balance of emotions is expertly portrayed by Weisz. She has an air of cool confidence about her character, which works well opposite the barely-contained anger and repression of Claflin’s Philip. Both actors spark off each other well, portraying a complex relationship which is potentially doomed. Michell keeps his direction stylish but self-contained, focusing intensely on his actors’ faces. ‘My Cousin Rachel’ is no stuffy Sunday afternoon film. It’s a period piece with a modern feel in its depiction of male-female relations. It’s a story that really draws you in, so that it becomes an involving and rewarding experience.
RATING: 4 / 5
Review by Gareth O’Connor
Review by Gareth O'Connor
4
Crazy Love