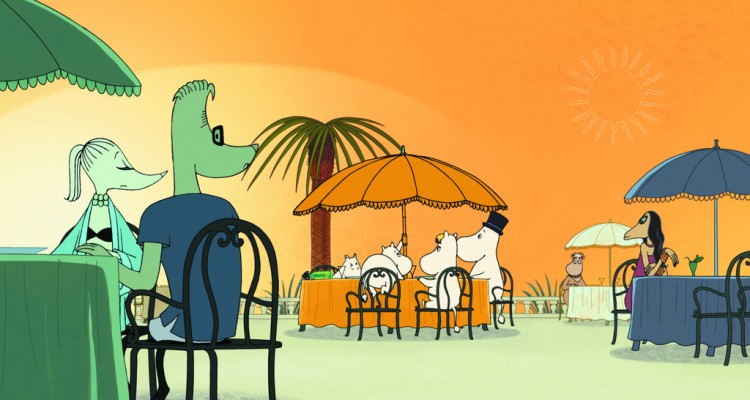 Moomin on the Riviera

MOOMIN ON THE RIVIERA (Finland/France/G/80mins)
Directed by Xavier Picard, Hanna Hemila. Starring the voices of Russell Tovey, Tracy Ann Oberman, Nathaniel Parker, Stephanie Winiecki, Ruth Gibson, Philippe Smolikowski, Dave Browne.
THE PLOT: They may look like your average hippopotamus, but the Moomins, we are assured by patriarch Moominpappa, are in no way related to that sub-Saharan mammal. Even if, despite walking on their hindlegs, they look darn like ‘em. After a brief encounter with some pirates, the Moomins decide to go on a holiday, leaving Moominvalley behind as they set sail for the French Riviera. Planting themselves in the royal suite of a fancy hotel without realising just how much it’s going to cost, the Moomins soon befriend the Marquis Mongaga (Smolikowski), whilst Snorkmaiden (Winiecki) finds herself the object of affection for wealthy playboy Clark (Browne). Much to the chagrin of Moomin (Tovey), who heads off to camp on the beach with Moominmamma (Oberman). And that’s when things get mildly interesting.
THE VERDICT: A gentle Finnish creation akin to Hayao Miyazaki’s Barbar – or is Maurice Sendak’s Peppa Pig? – there’s an undeniable charm to the Moomins, first created by Swedish-speaking Finnish illustrator and writer Tove Jansson in 1945. It’s worth noting that, over 48 years, there were nine books, five picture books and a comic strip released. Later, The Moomins inspired numerous TV series, films and, naturally enough, a theme park in Naantali, Finland.
So, you know, these rotund little fellas know what they’re doing. They just don’t do anything particularly notable here, their Riviera adventure a little more Mr. Bean’s Holiday than Mr. Hulot’s. Still, the little ‘uns could very well love it. And you have to admire the sweet little trick of having one character ask his cousin to take his place in the story, as he’s off to get married.
RATING: 3/5
Review by Paul Byrne