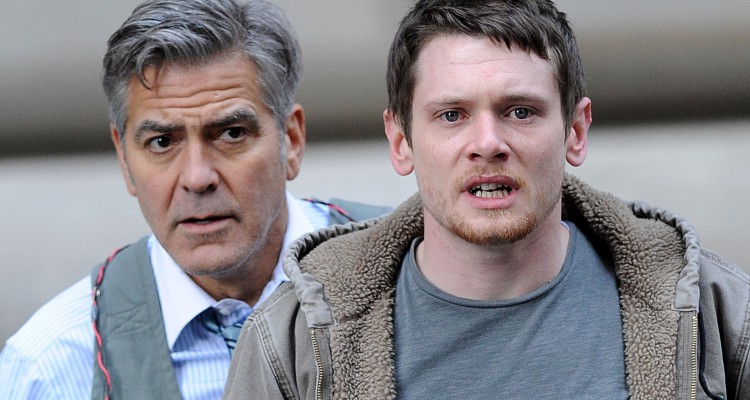 MONEY MONSTER (USA/15A/98mins)
Directed by Jodie Foster. Starring George Clooney, Julia Roberts, Jack O’Connell, Giancarlo Esposito, Catriona Balfe.
THE PLOT: Lee Gates (George Clooney) is the presenter of Money Monster, a New York based TV show that tells potential investors just what they should do with their money. After Ibis Clear Capital – one of Gates’ tips – loses $800 million overnight, Kyle Budwell (Jack O’Connell), desperate and dangerous after losing all of his money, breaks into the studio and holds Gates hostage with the demand of finding out just where his money went.
THE VERDICT: Jodie Foster returns to Cannes as director with her new film ‘Money Monster’. The story is told in real time, with Clooney, O’Connell and Julia Roberts – who plays Gates’ producer Patty – at the top of their game.
George Clooney leads the show here as the egocentric, loud but charming Lee Gates, and as usual, Clooney is on fantastic form as he runs the gamut of emotion throughout the course of the film. We both love and hate Gates, and this shows Clooney’s skills of to their best. Jack O’Connell makes Kyle the heart and soul of the film; even though his actions are violent and threatening, O’Connell makes it clear that this is a man who is at the end of his tether, and as we learn more about Kyle, O’Connell makes him a fully rounded and sympathetic character. Julia Roberts is whip smart as Patty, and her rapport with George Clooney is wonderful to watch on screen. The rest of the cast features Dominic West, Giancarlo Esposito and our own Catriona Balfe as Diane Lester, a PR agent for Ibis Clear Capital who begins to dig deeper.
Screenwriters Jamie Linden, Alan DiFiore and Jim Kouf have created a story that is just grounded in reality enough to be believable, but far fetched enough to be ridiculous, gripping and wildly entertaining. Logically, enough holes could be picked in ‘Money Monster’ to fill the Albert Hall, but disbelief needs to be suspended high for this film to work, but when it works, it really works. The film is well written, with the screenplay turning expectations on their heads, and pleas for help that would have worked in any other film being routinely flipped with expectations subverted.
Jodie Foster paces ‘Money Monster’ incredibly well, keeping the audience on the edge of their seats throughout the entire film. As mentioned, expectations are turned on their heads throughout the film, and Foster allows tension to build and dissipate at the precise right time to keep the audience engaged. The three lead actors are strong in their roles, easily owning the story of the film, and keeping the audience empathy with them. There are times when the pacing falters, but Foster quickly rectifies this each time, before the issue spreads throughout the film.
In all, ‘Money Monster’ is a fun, far-fetched and engaging thriller that is driven by the characters and the choices they make. Foster does well as director and the three leads are on top form, but the pacing struggles from time to time. ‘Money Monster’ is not a film to be thought about too deeply, but is an engaging thrill ride.
RATING: 4/5
Review by Brogen Hayes