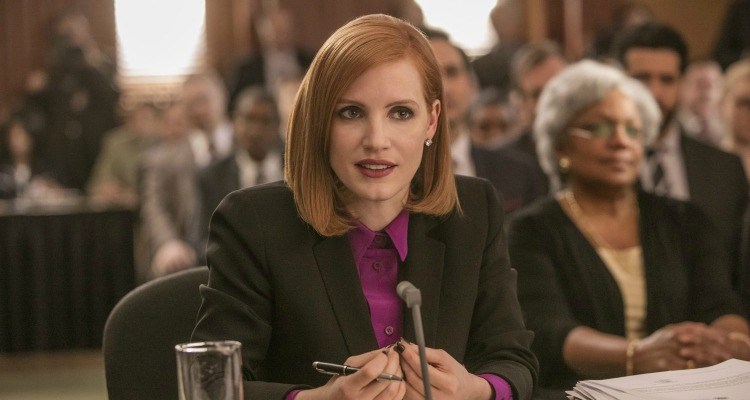 MISS SLOANE (France | USA/15A/132mins)
Directed by John Madden. Starring Jessica Chastain, Alison Pill, Mark Strong, Gugu Mbatha-Raw, Jake Lacy
THE PLOT: Powerful and formidable lobbyist Elizabeth Sloane (Jessica Chastain) is one of the most sought after people in her field, but when she switches sides during a campaign to change the background check policy for gun ownership, she finds herself up against one of the most powerful opponents of her career.
THE VERDICT: There is something of ‘Michael Clayton’ about Jessica Chastain’s latest film, and a touch of a mid-2000s feel, without the film feeling dated or old fashioned. There are times when the film gets a little caught up in itself, but it is, on the whole, a taut and engaging thriller.
Jessica Chastain leads the cast as the titular Miss Sloane, and the film is framed around her deposition to a Senate hearing about her potentially breaking the law and engaging in illegal activities for the sake of winning. Chastain makes Sloane an abrasive, cold and calculating character, but also allows the audience to root for this closed off and focused character. The rest of the cast features Mark Strong, Jake Lacy, Gugu Mbatha-Raw, John Lithgow, Alison Pill, Michael Stuhlbarg, and Sam Waterston, who all support Chastain wonderfully.
First time screenwriter Jonathan Perera had the script for ‘Miss Sloane’ picked up and on the road to being produced within a year, and his singular voice shines throughout the screenplay. The characters are all well drawn and have a purpose in the film, and the relationships feel real and relatable. There are times, however, when this tightly scripted and engaging political thriller gets a little too caught up in jargon, and with double cross after double cross, it is often difficult to keep track of just who is against whom throughout the film. That said, ‘Miss Sloane’ is a tight and enthralling political thriller, and a decidedly female story, albeit not a feminine one.
Director John Madden tries his best to keep the pace of the film moving throughout, but gets caught up and tangled toward the start of the second hour, giving ‘Miss Sloane’ a slightly flabby and slow feeling. That said, the performances in the film are strong, with Jessica Chastain shining in a role that is different than what we have seen her in of late. The tension and danger in the film feel real, with the audience being given a chance to root for a character who would certainly be treated differently if she were a man.
In all, ‘Miss Sloane’ is a taut and exciting thriller. Jessica Chastain shines in the lead role, and is backed up by a wonderful and powerful supporting cast. The screenplay and direction of the film are strong, for the most part, but there are times when a tighter directorial vision could have cleared up the slower parts of the film.
RATING: 4/5
Review by Brogen Hayes