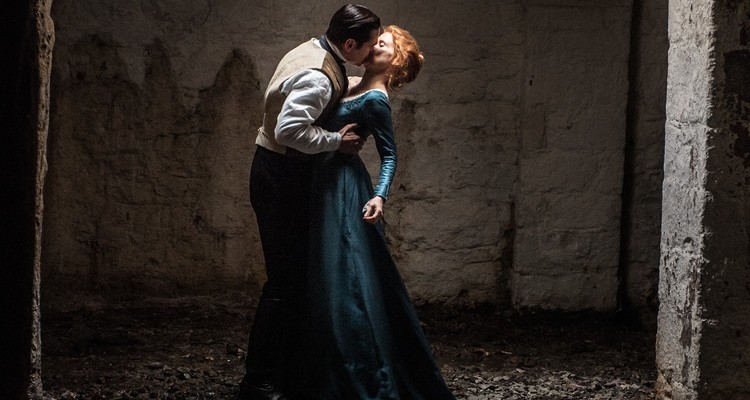 MISS JULIE (Norway | UK | Canada | USA | France | Ireland/TBC/129mins)
Directed by Liv Ullman. Starring Colin Farrell, Jessica Chastain, Samantha Morton
THE PLOT: Over the course of a Midsummer’s Night, Miss Julie (Jessica Chastain) and her father’s valet John (Colin Farrell) seduce, reject and ultimately destroy one another.
THE VERDICT: The idea of Liv Ullmann directing a film based on one of August Strindberg’s plays is enough to send any cinephile into spasms of delight, but it seems that something has been lost in this translation.
Jessica Chastain and Colin Farrell are on fine form in their roles as Miss Julie and John. Both get their moments of quietitude and intensity, and both relish them well. That said, however, there are times where the characters’ turn in emotion seems to come from nowhere and disappear just as suddenly. Farrell and Chastain are well equipped to handle such change, but it often leaves the audience reeling. Samantha Morton plays another quiet, religious but opinionated woman, and does well with the job, but is very much left to the side of this production.
Strindberg’s play was hailed for its naturalism, but precious little of this appears to be on display in Ullmann’s version; the characters’ motivations are never truly clear – other than a desire to punish the other, but this could easily have been achieved in other ways – and their desires often feel rather petty. There is surely a strong statement to be made with this text; the battle to survive, between a man and woman, but the film slowly turns into a game of tit for tat, with each character trying to outdo the other, until it becomes clear that all either of them needs is a good night’s sleep. The choice to move the story to Ireland makes little sense, unless one were to consider the idea that the pagan gods may have possessed the two, or that Liv Ullmann is trying to make a statement on Ireland’s outdated abortion laws, which somehow doesn’t seem likely.
As director, Ullmann coaxes strong performances from her actors, but in putting the entire piece together, leaves the film feeling disjoined. Individual moments work well, but fall apart when compared with what comes before or after, and relentless close-ups give the film a feeling of claustrophobia that was obviously intentional, but doesn’t work. As well as this, the pacing of the film is torturous which, combined with the constant changes in energy and atmosphere, leaves the film feeling endless.
In all, MISS JULIE could have been a blistering film filled with energy, strong performances and a powerful message. As it stands, only one of the three is communicated, and when combined with torturous pacing and oddly framed shots, MISS JULIE lacks the sizzle it needs.
RATING: 2/5
Review by Brogen Hayes