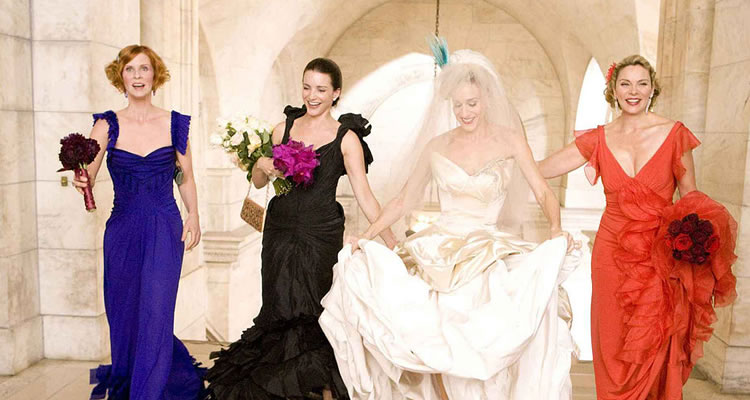 Memorable Movie Weddings – From LOVE ACTUALLY to THE GRADUATE

‘My Big Fat Greek Wedding 2’ is released in Irish cinemas this week, and sees Toula (Nia Vardos) and Ian (John Corbett) sending their teenage daughter off to college for the first time, and dealing with marital troubles. As they struggle to stay together, the family reunites for another wedding; this one even bigger than their own!

To celebrate the release of ‘My Big Fat Greek Wedding 2’ in Irish cinemas, Movies.ie have taken a look at some of the most memorable weddings from the movies. Keep reading to find out more…

SEX AND THE CITY
Carrie (Sarah Jessica Parker) and Mr Big (Chris Noth) danced around one another for every season of the ‘Sex and the City’ TV show, so it was no surprise when the couple finally ended up together. It was also no surprise that Carrie wanted a big event wedding at the New York Public Library, and Big was freaked out and ran away from it. Carrie thumping Big with her bouquet on the street could well have been the memorable moment from their wedding, but the nuptials did go ahead in the end… In a registry office, on a small scale. It is this wedding that is the memorable one, since Carrie and Big tied the knot in an understated ceremony – Carrie wearing some beautiful Manolo Blahnik shoes that Big proposed to her for the second time with – and the afters taking place in a restaurant.

LOVE ACTUALLY
Peter (Chiwetel Ejiofor) and Julet (Kiera Knightley) is surprisingly the only wedding in the famed Richard Curtis rom-com ‘Love Actually’ their ceremony takes place at the start of the movie and, in true rom-com style, does not stay small or quiet. Best man Mark (Andrew Lincoln) – who, it is later revealed, is on love with Juliet – arranges for a choir and band to pop up in the church and serenade the happy couple with The Beatles’ song “Love is All You Need”. The scene is sweet and touching, and of course, throws the audience off the scent that Mark’s dislike of Juliet is all an act.

TWILIGHT: BREAKING DAWN PART 1
At the end of ‘The Twilight Saga: Eclipse’, Bella Swan (Kristen Stewart) had finally given in to Edward’s (Robert Pattinson) repeated requests to marry him. At the start of ‘Twilight: Breaking Dawn Part 1’ Bella and Edward are finally wed. The ceremony takes place underneath towering trees, dripping flowers and with all their friends and family present. Aside from the almost embarrassingly long first kiss between the two, the ceremony is sweet and tender… So sweet and tender in fact that a UK couple replicated the whole thing, and even changed both of their surnames to Cullen.

THE GRADUATE
Although the marriage of Elaine (Katherine Ross) and Carl (Brian Avery) is not finalised, it is certainly one of the most memorable cinematic weddings. Having been forced into dating the daughter of Mrs Robinson (Anne Bancroft), which whom he has been having an affair, Benjamin (Dustin Hoffman) treats her cruelly, before realising he does in fact, care for her. To break up her wedding, Benjamin arrives at the church, causing a scene and calling out Elaine’s name, before the pair leave and Benjamin barricades the congregation inside the church using a cross. After the initial adrenaline wears off, Elaine and Benjamin are on a bus headed for pastures new, and their facial expressions tell a very different story.

BEETLEJUICE
Another wedding that doesn’t go through is that of Lydia Deetz (Winona Ryder) and Betelgeuse (Michael Keaton). The treat of young Lydia having to marry the gruesome Betelgeuse comes about when she summons him for help, when the ghosts of Adam (Alec Baldwin) and Barbara (Geena Davis) begin to whither and die due to a summoning gone wrong. Betelgeuse agrees to help on the condition that Lydia marry him and allow him to stay in the mortal realm. The wedding ends in shambles after Adam and Barbara break up the nuptials using a sandworm, and Lydia is saved from a ghoulish and loveless marriage. Phew!

Honourable mentions to… ‘The Wedding Singer’, ;Sex and the City 2’, ‘Shrek’, ‘The Princess Bride’ and ‘My Best Friend’s Wedding’.