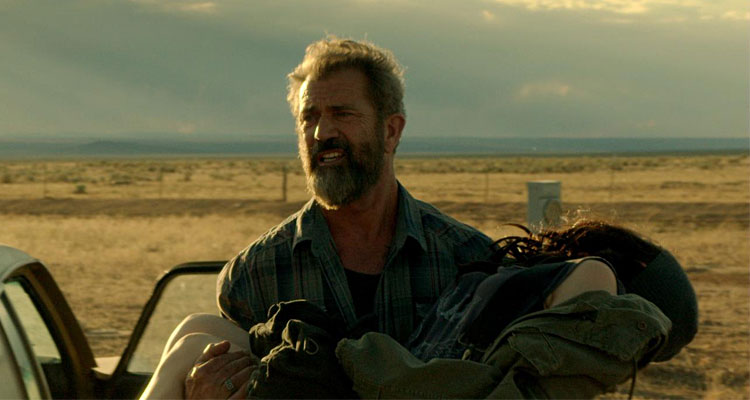 You might have spotted Mel Gibson walking the streets of Dublin this month, he’s currently in town making ‘The Professor and the Madman’ with Sean Penn. After a few years away from film-making, the ‘Lethal Weapon’ star is back on screen in new thriller ‘Blood Father’.

Directed by Jean-François Richet, ‘Blood Father’ follows John Link (Mel Gibson) who has been living the clean and sober life since he got out of prison. Link works as a tattoo artist and is trying to keep his head down. Link’s daughter has been missing for three years, after she walked away from her mother’s home with no warning, so when she contacts Link out of the blue, he knows this is going to be trouble. He just doesn’t realise how much. Soon, Link finds himself in serious violation of his parole as he fights to save his daughter from drug dealers and thieves who are out to kill her.

Movies Plus magazine had the pleasure of sitting down with Mel Gibson to find out more about his latest movie, and chat about his career to date.

You have been a bit quiet over the last few years, why did this ‘Blood Father; bring you back to the big screen?
It was a cool story. It was a character I thought I could do; I researched it. I’m a parent so it ticked a lot of boxes. I liked the wit, the structure and the tone of the story.

Were you nervous about this film at all?
Yes and no. One always has a healthy concern that you can do it or it will work in the time allotted and all that sort of stuff. You just have to jump in and act as if everything is going to be great. You never know, and a lot of things are beyond control. I worked on a film one time where it just rained. What are you going to do? Shoot in the rain.

You character sacrifices everything for his daughter; do you think that being a father is the hardest job there is?
Well no, I think being a mother is the hardest job, because I think that the children depend more on the mother. Dad has to be there, I just think being the mother is tougher. I had a wife, I had children and when I look at what the mother does, I’m just the helper. She’s amazing. I go out and do other stuff as well.

What kind of stories attract you the most?
I don’t know, they differ. Historical things always turn my lights on. I always like to hear stories that really happened, because truth is always weirder than fiction. There are some weird things in the truth.

What do you think is needed to be a good dramatic actor?
I think you need to be able to breathe and have an imagination. Apart from that, the other tools you have to work with, your instruments are your voice and whatever rubber face you have. You get what you get. Different people have different ways of expressing things so you have to find out what your particular strengths are and try and focus them, which requires some kind of self-awareness.

How hard is the physical stuff for you now? Are you at an age where it’s more difficult for you?
Of course, yeah. You’ve gotta work out, stay in shape. It’s easy to hurt yourself, nowadays you just bend over and it’s like “Ahh!”. Things change.

Link is struggling with demons throughout the film. Was this something you wanted to explore on screen?
Yeah. I know guys like that. I know guys from biker groups who had a crazy life and reformed. I know a guy who was with a biker group and now he helps people get sober. He’s a parole officer and he gets people out of jail and takes care of people. He’s a really good person but he had a dark past. It’s interesting to see what happens to people, how they change, how they redeem themselves. That was what was interesting to me about the character.

Being a director yourself, do you find it difficult to be directed?
No not at all, it’s a break. It’s a breather. It’s a welcome relief. I am really interested to see what they [the director] do. It was considered; it wasn’t just pot luck. I saw ‘Mesrine’ and I knew it was good, that’s why I was interested to see what [Jean-François Richet] he did. It was different to something I would do, but it was good. I like how he was able to convey things with less, which is, economy of image and telling the story, is very important stuff. It’s easy to be complicated. I enjoyed working with Jean-François.

In many of your films the hero sacrifices himself for the greater good. Is this a motif you are drawn to?
I think that’s the ultimate act of heroism, so when you see something like that – if there is something good enough to die for, like a justified war, or sacrificing yourself for someone you love – it’s always an uplifting theme. It goes through myth and religion from way back to the Mayans. It’s crazy stuff. They are stories that they speak around caves back before they had film, back before they had wall paintings, it is the stuff that inspires people and that’s why we tell stories; to inspire people and to affect each other’s emotions and sensibilities.

You’ve returned to directing recently, what’s that been like?
I really dug it. It was the independent world and for less but epic! For less. It’s the way, unless you are a superhero movie where they give you a lot of money and time. People are less likely to take a risk on something… I showed it to a test audience and the comment was “Wow, it’s like they used to make films!”, which was a really strange thing for me to hear.

Are you trying to evolve?
Yeah I think so, trying to do different things. It’s hard to escape yourself. It’s very easy to take short cuts, and it’s very easy to do what’s comfortable sometimes, and not try. When you know something already works or works sufficiently, to try and push yourself out of that comfort zone and avoid that; take another choice… You always look in retrospect and go “Oh why did I make that choice?”.

Do you have other directorial projects that you want to work on?
Oh yeah. I have three or four. Cool stories, they’re all independent now and you have to raise the money. People have to have faith. The guarantee isn’t always there because it’s not ‘Spider-Man’ or ‘Thor’ or something.

Didn’t doing ‘The Passion of the Christ’ give you the freedom to make films your own way?
That was like lightning in a bottle. It practically self-distributed, through necessity because people were getting away like crazy. It scared people away. Couldn’t get a distributor, and after it did really well Rupert Murdoch was looking for someone to throw out a window because he was advised against it. It was an interesting process because it walked around the entire system.

You have a lot of vocal supporters like Jodie Foster and Robert Downey Jr, do you ever think that the US film industry will embrace you in the way it did in the past?
I don’t know. We’ll see. If I make a film that makes money, yeah.

BLOOD FATHER is in Irish cinemas from Friday!