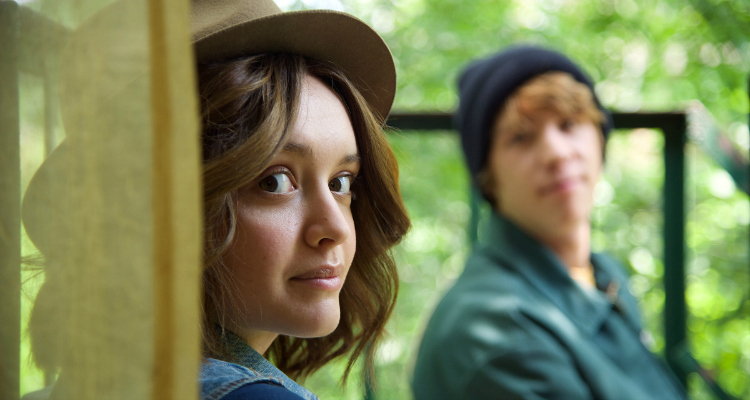 Olivia Cooke as "Rachel" and Thomas Mann as "Greg" in a scene from the motion picture "Me and Earl and the Dying Girl." CREDIT: Anne Marie Fox, Fox Searchlight Pictures

ME AND EARL AND THE DYING GIRL

ME AND EARL AND THE DYING GIRL (USA/12A/105mins)
Directed by Alfonso Gomez-Rejon. Starring Olivia Cooke, Thomas Mann,Connie Britton,RJ Cyler, Nick Offerman, Molly Shannon
THE PLOT: Greg (Thomas Mann) is a high school senior who, after years of struggling to find the right balance, is just the right amount of invisible at school. Greg’s carefully ordered life is thrown into chaos when his mother (Connie Britton) insists that he spend time with Rachel (Olivia Cooke), a girl from his school who has been diagnosed with leukaemia.
THE VERDICT: It doesn’t seem like it has been that long since THE FAULT IN OUR STARS was released in Irish cinemas, but here we are again with another teen cancer movie in ME AND EARL AND THE DYING GIRL. Unlike Although this big screen teen cancer flick may be filled with quirky characters and teens with affectations, it somehow feels more honest than the John Green film from only last year.
Thomas Mann is strong in the leading role as Greg; he captures the affected youth feel in the character, and his voice over, although flowery in places, is wry, funny and ultimately, honest. Mann is charming enough for this self involved character to work, and he makes Greg likeable and warm. RJ Cyler plays Earl, Greg’s best friend since childhood, who he makes spoof silly movie remakes with, and who Greg mostly refers to as a ‘co-worker’ rather than a friend. Cyler makes a small character memorable and, although he may hide under a layer of bravado, Earl is actually and observant and kind character. Olivia Cooke rounds out the central trio, and makes Rachel less of a manic pixie dream girl, but one who certainly hides her pain and suffering for the sake of her friend. Rachel is self aware and observant, and Cooke works well with her co-stars. The rest of the cast is made up of Nick Offerman, Connie Britton, Jon Bernthal, Molly Shannon and Catherine C. Hughes.
The story, based on a novel by Jesse Andrews, was adapted for the screen by the author, and has a feel of a Wes Anderson film to it at times. Motion stop animation is used to illustrate points made in the voice over, and although the spoof movie idea may be a little too pleased with itself – titles include ‘Death in Tennis’, ‘Grumpy Cul-De-Sacs’ and ‘My Dinner with Andre the Giant’ – this does feel the affected nature of the characters. The cancer issue is dealt with in a clever and sweet manner, and is never really allowed to overwhelm the story, which focuses on the ‘doomed friendship’ instead.
Director Alfonso Gomez-Rejon, who most recently worked on TV’s AMERICAN HORROR STORY, makes the film light and bright, with darkness creeping in around the edges. The performances from the entire cast are strong, although some are given more of a focus than others, but there is a cohesive feel to the film and, although Greg feels a little like a manic pixie dream boy at times, he is soon brought down a peg or two by the people who really know him. The pacing is strong, for the most part; it is a joy to spend time in this quirky world, but there are times when too much focus is given to a gag, which then slows the movie down to a crawl. The film is also beautifully shot, with some unexpected shots and off kilter framing.
In all, ME AND EARL AND THE DYING GIRL is filled with affectations and self involved youths, but that feels honest for a film about 18 year olds. The performances are strong, the film beautifully shot and, although the pacing loses it from time to time, these affected youths are honest and moving.
RATING: 4/5
Review by Brogen Hayes