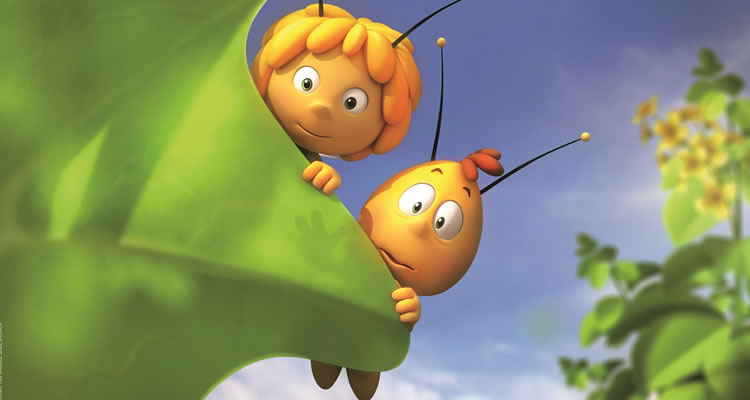 MAYA THE BEE (Australia | Germany/G/89mins)
Directed by Alexs Stadermann. Starring Kodi Smit-McPhee, Noah Taylor, Richard Roxburgh, Jacki Weaver, Miriam Margolyes
THE PLOT: From the moment she is born, Maya the baby bee (Coco Jack Gillies) is curious about the world around her, and why things are as they are. When her curiosity gets her into trouble, Maya finds herself banished from her home, and sets out to make some new friends, and learns some lessons along the way.
THE VERDICT: Based on a book first published in 1912, written by Waldemar Bonsels, Maya the Bee is a film that is very much aimed at the youngest people in the audience. The cast do well enough with what they are given, and with actors including Kodi Smit-McPhee, Noah Taylor, Richard Roxburgh, Jacki Weaver and Miriam Margolyes, the film has a gravitas hat comes from the voice cast, which is not backed up by the familiar, simple story and the dated animation.
Writer Fin Edquist seems to have based the screenplay for Maya the Bee fairly closely on the original German book, although he has tried to tone down the militaristic overtones. That said, the film suffers from being familiar and overly sweet;in trying to tone down the tones of racism that appear in the book, Edquist has made the film completely not threatening and sweet, but also made the charaters familiar and rather unengaging.
As director, Alexs Stadermann allows the film to bounce along at a fairly even rate, but there is little comedy here, the scenes feel episodic and the message is so heavily hammered home that the film seems to buckle under the weight of its own sweetness. Add to this characters that we have seen before – and a grasshopper who is surely modelled on Jiminy Cricket – there is very little in Maya the Bee for anyone over the age of five. As well as this, the animation is slightly odd – the bees have unnervingly human looking faces – and the entire film is so glossy as not to feel rooted in any reality we have seen on screen before.
In all, ‘Maya the Bee’ is a brightly coloured, non-threatening film for the under-fives, but the adults who have to sit through this bee movie (gettit!?) will have little to engage with in this under animated, colourful but vapid film that collapses under the weight of its own contrived sweetness.
RATING: 1/5
Review by Brogen Hayes