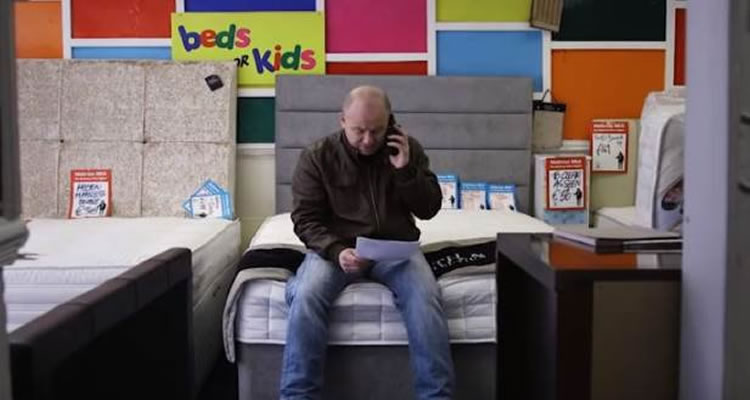 MATTRESS MEN (Ireland/15A/81mins)
Directed by Colm Quinn. Starring Michael Flynn, Paul Kelly
THE PLOT: The bed and mattress salesman known as Mattress Mick – real name Michael Flynn – has become something of a sensation recently, due to his B-movie inspired YouTube videos and songs. Filmmaker Colm Quinn takes a look behind the scenes at the viral video sensation, and the man behind the magic; Paul Kelly, a part-time employee of one of Mick’s stores.
THE VERDICT: For those of us in Ireland, Mattress Mick is a household name due to his hilarious videos and antics on YouTube, which have caught the attention of the world and made Mick something of a local hero. That said, you would be forgiven for thinking that there is not much to tell about Mattress Mick – certainly not enough to fill an 81 minute film, despite his moving piece on Humans of Dublin earlier this year – but ‘Mattress Men’ is less of an examination of Mick himself, and more of a look at how people in Ireland are struggling to overcome the recession, even though we are not so reliably told that the economy is in recovery.
‘Mattress Men’ is framed around Paul Kelly, a man who works part time for Mattress Mick, and the one who came up with the idea for the deliberately cheap and slightly shoddy looking videos that have made Mick and his mattresses so famous. Paul is a man much like any other in Dublin; since the recession began in 2008, he has found himself made redundant twice and is still struggling to make ends meet for his young family. This is contrasted with Mick himself; when the recession struck him, Mick started to lose his businesses, and it was only through taking Paul’s ideas on board that the business began to thrive again, getting coverage all around the world – from Vice to The Sun newspaper, and tweets from Stephen Fry.
“Over the next few years” Mick tells us in voiceover “…I would like the Mattress Mick name to be as synonymous with mattresses as McDonald’s is with hamburgers”. This is all well and good, but since Paul is not getting paid for his creative work, and Mick is determined to bring in a promoter – Sean Mooney – trouble begins to set in in this small but effective marketing team.
‘Mattress Men’ paints a picture of Dublin that is not entirely flattering. The city is certainly not shown in its most flattering light, and both Mick and Paul are shown off for both their good sides and their bad. There is no real villain in ‘Mattress Men’ other than ambition, and it is because of this that the film begins to run out of steam about 60 minutes in. The real focus of the film is Paul, a man who is struggling, like many Irish people, to recover from the troubles visited upon them by the sudden recession. It is in Paul’s story, this microcosm of Irish life, that the story of the country as a whole, trying to make good and live their lives to the full. “Life isn’t supposed to be like this” states Paul in a moment of heartbreaking sincerity; surely this line has been repeated in every Irish household over the last eight years.
In all, ‘Mattress Men’ tells the story of the Irish recession and the devastating effect it had and still has on the country, through the microcosm. There are some scenes that feel deliberately staged for the cameras, and the film runs out of steam from time to time, but it is hard not to root for the plucky, charming and flawed people at the heart of this film.
RATING: 4/5
Review by Brogen Hayes