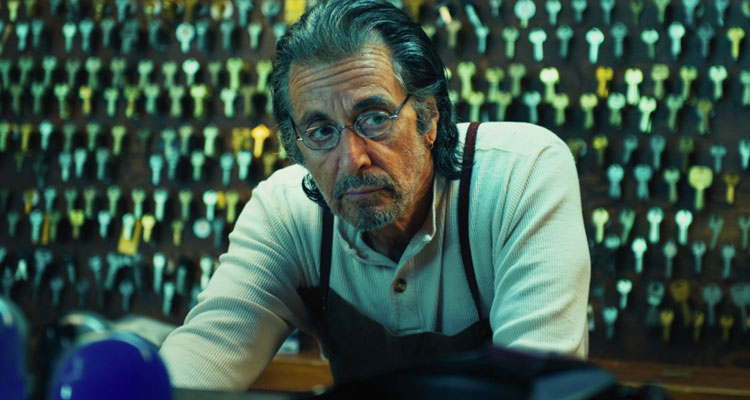 MANGLEHORN (USA/12A/97mins)
Directed by David Gordon Green. Starring Al Pacino, Holly Hunter, Harmony Korine, Chris Messina, Skylar Gasper, June Griffin Garcia, Rebecca Franchione, Elizabeth Lestina, Lara Shah.
THE PLOT: A self-confessed wounded man, smalltown Texan locksmith A.J. Manglehorn (Pacino) is a quiet man with “real pain in my heart”. Just why that is we get to learn as A.J.’s narration reads us letters to the one that got away, Clara – letters that keep being returned to sender. It’s a state of affairs that has made A.J. a loner, and, beyond the happy face he puts on for his customers and his beloved 6-year-old granddaughter Kylie (Gasper), a plainly bitter and misanthropic man.
The only true ray of sunshine and hope emanates from perky bank teller Dawn (Hunter), the two exchanging witticisms and glances every Friday, as A.J. does his weekly earnings deposit. The question is, can A.J. turn off his crippling hatred for the world long enough to let Dawn in…?
THE VERDICT: In that strange twilight world where he’s a film legend but – as with so many of his fellow 1970s heavyweight contenders (De Niro, Nicholson, etc) – his latest offerings tend not to get the hairs on the back of your neck tingling, or many bums on multiplex seats. Even when, as with MANGLEHORN, you have the well-trodden novelty of seeing a big old lion takes a stroll through indie park.
Having gone beyond parody quite a few years ago, there’s always the hope with an actor like Pacino that the combination of his immense baggage and his celebrated talent might just spark a great film. And with David Gordon Green – who has scored both in the mainstream (with the likes of PINEAPPLE EXPRESS and TV’s EASTBOUND & DOWN) as well as on the arthouse circuit (GEORGE WASHINGTON, ALL THE REAL GIRLS, PRINCE AVALANCHE) – behind the camera, those hopes get a little higher. So, sad to say that, even though MANGLEHORN definitely has its low-watt charms, and Pacino, Hunter and the gang pull their punches here just about enough to make you forget they’re very big fishes in this small pond of a story, there’s a distinct lack of purpose about this slacker version of AS GOOD AS IT GETS. As first-time writer Paul Logan has just found out, a heavy slice of sleight ain’t easy to get right.
RATING: 2/5
Review by Paul Byrne