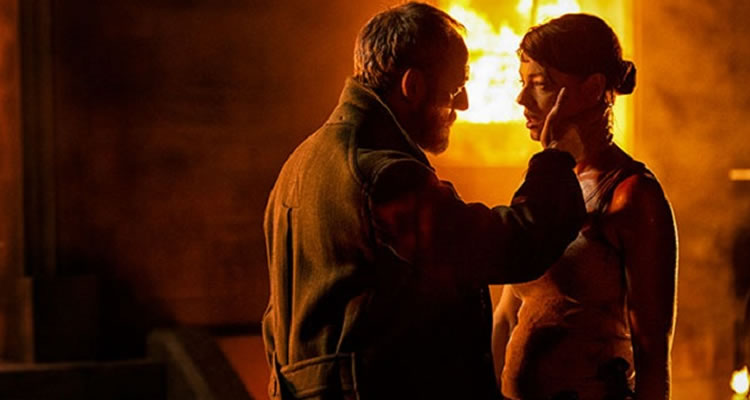 Making his feature debut with the rather fine horror flick LET US PREY, Irish filmmaker Brian O’Malley gets lippy with Movies.ie about genre-hopping, John Carpenter cool and turning it up to 11.

Having gone down rather nicely at this year’s Jameson International Dublin Film Festival, and with rave reviews from the likes of Sound On Sight, The Austin Chronicle and noted novelist Ian Rankin – who reckoned Let Us Prey is “horror the way it was always supposed to have been made” – O’Malley’s film is centred around a cop shop over one highly eventful night. It’s redemption time, and as everyone’s dark little secrets come back to harm them, everyone, from cops to robbers, quickly realise all this penetrating penance is somehow being orchestrated by the mysterious Six (Liam Cunningham). Only newbie PC Rachel Heggie (Pollyanna McIntosh) seems to be immune from the hard rain that’s about to fall…

MOVIES.ie : You’ve got a fruitful horror mix here of the biblical and the Itchy & Scratchy – what hellhole did Let Us Prey spring from?

BRIAN O’MALLEY: The hellhole it sprung out of was the minds of two Scottish writers, David Cairns and Fiona Watson. I emailed them your question and this is what Fiona had to say:

‘David and I wanted to write a horror movie that would have a good chance of actually getting made (after years of being ‘on the brink’), so it had to be small and self contained, ideally with just one location. The obvious model for that is Assault On Precinct 13, so the location became a police station. The core idea came from interesting scenarios that could play out in a confined space. I came up with the idea of an individual who would act like a disinhibitor on other people in close physical proximity to him, then the audience would just sit back and watch the fireworks. We actually went to a semi-rural police station to have a look round. David spotted the boot polisher. I looked at it and said, “I wonder if you could kill someone with that, or at the very least, horribly maim them.”

Short answer – A human disinhibitor in a confined space.’

How did the film come together? Did Fiona and David come to you first?

Well, actually, it was the producers who came to me, not the writers. Makaar Productions in Scotland and Fantastic Films here in Ireland were doing a co-production and wanted a director with an interest in genre. Whilst I’d never made a feature film, I had made over 100 TV commercials and two very well received short films, so they felt they could sell me to investors as more than just a first timer. My first short from 2005, Screwback, was a gangster film featuring Liam Cunningham, and this was used to show my ability to direct actors, create tension and deal with violence cinematically within a genre project.

That Scottish and Irish backing – how was the glorious experience of pulling the budget together?

Thankfully, as a director, I’m not involved in any of that. Other than meeting investors and discussing my vision for the film, pulling the finances together wasn’t something I was involved in.

What sort of budget are we talking about here?

More than my house. Well, my current house anyway. Talk to me when we’ve made Let Us Prey IV: MacReady’s Return.

Your debut feature – piece of piss, or a baptism of fire?

A debut feature is always going to be difficult, particularly when working off a low budget. Whilst I had no concerns about my ability to direct the film, the big challenge was one of time. When you’re faced with an apparently unachievable schedule everyday, that creates a certain amount of stress before you’ve even turned over. However, at the end of each week you find that you’ve actually made the page count, and by the end of the shoot that unachievable schedule has been achieved. So from that standpoint, there’s an element of it being a baptism of fire. I don’t necessarily expect my next feature to be any less pressurised, but I will bring with me the experience of having done it before – and with that comes the confidence that you can do it again.

Casting is key, and young Liam is spot on as this particular Man In Black, whilst Pollyanna McIntosh has that Ripley quality from the start. Big quest to get them…?

Well, Liam played the main role in Screwback, and we were due to make a feature length version of that in 2009/2010, called SISK, with Liam reprising the role, but unfortunately, it collapsed before it went into production. So I had already developed that relationship with Liam. When this came along I simply called him and asked him to read it. Next day he called me back and said he was in. It was very easy, but it was down to the fact that we’d already worked together and we’d made a film we were both happy with.

Pollyanna was suggested by the Scottish Producer, Eddie Dick. I watched her first in Bob Servant: Independent, in which she was terrific. Then I watched her in The Woman, and thought she was fierce. I then met her in London, and apart from her obvious physicality, she’s a very thoughtful actor who goes to great lengths to understand her character. After a long chat I knew she’d bring the gravitas the role needed, and the humanity that was essential to her character, considering the arc she’s gone through from a young age until now. I find strong women in films to be far more heroic than strong men, because its harder for them. The greatest action hero in cinema for me is Ripley; she’s tougher than any Schwarzenegger or Stallone because she finds it really difficult, but persists. So I’m very drawn to these women who survive in difficult circumstances. They’re remarkable, as they are in real life. Pollyanna embodied that perfectly. She’s a gentle but fearless warrior.

Despite the intial Hitchcockian rush of our feathered friends, this is far more John Carpenter than old boy Alfred – were there certain cinematic reference points for you here?

When I read the script the Carpenter reference to Assault on Precinct 13 was obvious, and indeed as mentioned by Fiona, wholly intentional. I’m more of a fan of the tone of Carpenter’s films than anything in particular he does directorally, and I think a great deal of that is down to the music.

So it was clear quite early on that the Precinct 13 reference was something that wouldn’t go unnoticed, so rather than shy away from it I decided to give it a nod, whilst exploring my life long love of electronic music. So I would say it’s in the brilliant soundtrack by Steve Lynch that the the biggest refference to Carpenter can be found, although the wardrobe worn by Niall Fulton (playing the doctor) was inspired by Donald Pleasance in Halloween. When Niall asked me what kind of man the doctor was, I said if Donald Pleasance was alive I’d be offering him the role. Niall took great comfort from that and performed accordingly.

Interestingly, whilst touring the film last year I discovered there were quite a few horror movies made by directors of my age who were including Carpenter-inspired soundtracks, so it does seem like the children of Carpenter’s cinema are finally getting to pay homage.

WATCH THE LET US PREY TRAILER

Everyone’s got a dark secret or two here – did you struggled with the amount of madness and mayhem you should introduce here?

I didn’t struggle at all – I fully intended taking it up to 11. But what I did do was dial things back in the first act, a little less in the second act, so that the mayhem became part of a crescendo. Originally it was more bombastic throughout, but I wanted it to start quiet and ominous, creating a uncomfortable sense of dread, before unleashing the beast. Once MacReady – could be a reference to The Thing? I must ask Fiona – walks back in the front door all bets are off, and I wanted that to be a real surprise moment for everyone.

You’ve left yourself open to a sequel or two, which is the job of any good horror film…

It’s wide open for a sequel. I think if there is one, it needs to at least begin in an entirely different environment. I like the idea of it opening up like the start of Mad Max: Beyond Thunderdome, where we find Rachel wandering alone in the desert. Where it goes from there I’ve no idea, but it would be great to make something that leaves the small Scottish town behind for something more exotic. Casablanca meets Angel Heart. Something dark, and sweaty, and unfamiliar. I’d also like to see where Six got his coat. It was a genuine 135-year-old coat from the Victorian era, and at the time would have cost the equivalent to £20,000 to have ti made. So someone very wealthy owned it and I’d love to see where Six got it – in a card game I assume! Maybe up in the Hellfire Club in the Dublin Mountains?

When starting out with Screwback and then, five years later, another short, Crossing Salween, did your self-belief ever waver? It’s a tough line of work, the film business…

Well, during those years I was working on SISK. When It collapsed in 2009/2010, I then wrote Crossing Salween and made that almost immediately. So I never lost sight of the goal. I was then offered Let Us Prey in 2012, so there’s always been something on the boil.

That second short was something entirely different, being set in Thailand, as a young girl faces the horrors of the Burmese jungle following the massacre of her family. From Gary Moore’s short story…

Yeah, that film was born out of a short story the producer Gary wrote. He was doing a photographic project for an NGO in the Burmese refugee camp Mae Sot in Northern Thailand, and met a number of Karen (minority tribe) women with remarkable stories of loss and survival. Everything that happens in Crossing Salween is based on those tragic stories, including the idea of creating an imaginary friend to help you on your journey. It was an amazing life experience making that film and I’m very proud of the end result. We’re hoping to make a feature length version of it in 2016.

Where to from here? Are you drawn to the horror genre, or would you rather change gears entirely now?

I’m a fan of genre and would be very happy to carve out a career as a genre director. Having done a horror there’s a certain market value in following through on that in my next film, however, my plan is to do a bloodless ghost story. I’m writing one set in the London Underground called The Lost Station, and I’m in discussions about some others. Crossing Salween is something entirely different, however it does have a supernatural aspect to it. I like the idea of going from a balls to the wall gory horror, to a ghost story, to an adventure set in Burma. I think that would keep things open for me and allow me to explore genres beyond just horror. But I do love a bit of horror….