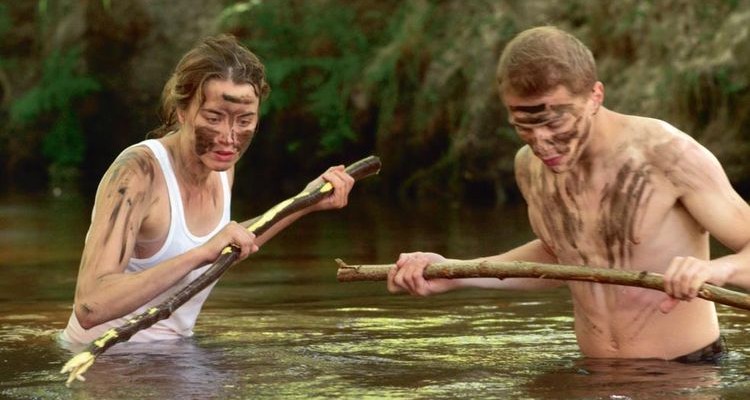 LES COMBATTANTS (LOVE AT FIRST FIGHT) (France/IFI/98mins)
Directed by Thomas Cailley. Starring Kévin Azaïs, Adèle Haenel, Antoine Laurent, Brigitte Roüan, William Lebghil, Thibaut Berducat, Nicolas Wanczycki
THE PLOT: Arnaud (Kévin Azaïs) is looking forward to a summer of hanging out with his friends and learning the family carpentry trade after the death of his father. When his friends sign him up for an army training fight, and he meets Madeleine (Adèle Haenel) however, things change. Finding himself falling for the aloof and army focused Madeleine, Arnaud decides to join the same boot camp as her, rather than spend a summer away from her.
THE VERDICT: Despite the cringey English language title, LOVE AT FIRST FIGHT is actually a sweet and warm story about first love, and the ridiculous lengths we will go to to be around the people we want. Azaïs and Haenel make a lovely central duo on screen, both complimenting and challenging each other, and allowing the power dynamic to shift and evolve with the situations they find themselves in. Although there is a familiar feeling about parts of the film – coming of age adventure tales like THE GOONIES come to mind – Azaïs and Haenel make the film their own, and conjure up the feeling of sun drenched first love on screen. The rest of the cast is made up of Antoine Laurent, Brigitte Roüan, William Lebghil, Thibaut Berducat and Nicolas Wanczycki.
Claude Le Pape and Thomas Cailley’s screenplay pits two opposites against one another, and allows friendship and romance to grow from there. Nothing is set up without it being allowed to affect the film as a whole – other than perhaps the death of Arnaud’s father, which feels a little out of place with the feel good emotions dancing across the screen – and although the central two characters are the ones most fleshed out, the smaller characters get their moments to shine. As the two head off to boot camp, the film feels as though it is settling into the world of Arnaud and Madeleine, and anything else that enters their bubble feels like a distraction to the audience, and the characters, getting to know one another better.
Director Thomas Cailley draws the audience into the relationship between Madeleine and Arnaud, allowing Arnaud to be a likeable everyman, so as not to make him vanilla, and Madeleine to be vociferous and determined, only to come around to other ways of thinking. The characters’ actions feel organic and well placed, even the inevitable romance seems to come from the right place within the characters, rather than being shoehorned in for the sake of the script.
In all, LOVE AT FIRST FIGHT is a sweet and warm look at first love. Azaïs and Haenel are lovely together as the central couple; their easy chemistry and ability to allow the power in the relationship to flow back and forth is what makes the film so enjoyable to watch.
RATING: 4/5
Review by Brogen Hayes