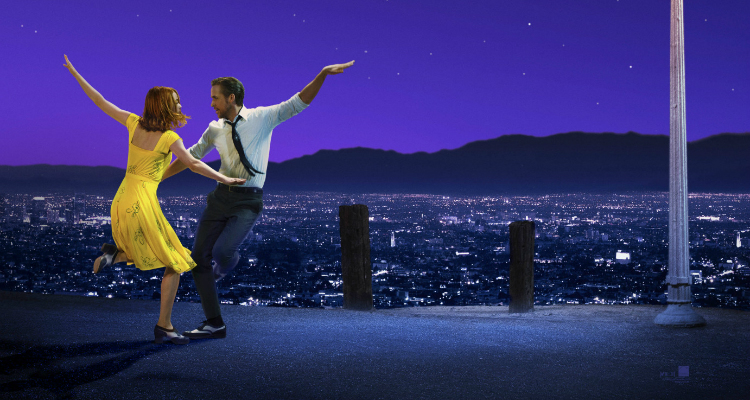 LA LA LAND (USA/PG/128mins)
Directed by Damien Chazelle. Starring Emma Stone, Ryan Gosling, John Legend, Rosemarie DeWitt, J.K. Simmons
THE PLOT: Mia (Emma Stone) and Sebastian (Ryan Gosling), an aspiring actress and a jazz pianist with dreams of opening his own nightclub, fall in love after they cross one another’s paths time and again. As their dreams become ever closer, their aspirations begin to pull them apart.
THE VERDICT: Directed by Damien Chazelle, ‘La La Land’ is a complete change of pace from the director’s first feature length film ‘Whiplash’. ‘La La Land’ is a beautiful and gentle love story that captures the romantic feel of old Hollywood musicals, as Gosling and Stone sing and dance their way through their romance and their careers.
Emma Stone is luminous in the leading role as Mia; there is an old Hollywood feel to Stone and her character, and she inhabits Mia, making her feel real and utterly relatable as she tries to juggle everything she ever wanted as it all lands in her lap at the wrong time. Ryan Gosling fares less well, since he is trying to keep up with the glittering Stone, but his singing voice is beautiful, and he makes Sebastian the right kind of romantic as he struggles to make the choice between what’s easy and what he actually wants. The rest of the cast features J.K. Simmons, Rosemarie DeWitt, and John Legend.
Damien Chazelle’s screenplay for ‘La La Land’ has been a labour of love for the writer/director as he spent years trying to convince studios that the musical is not as dead as once thought. The love story between Mia and Sebastian feels light and airy, and the struggles Chazelle went through to get the film made have obviously been poured into the characters on screen. The original songs created for the film capture the feeling of new love, in all its excitement and joy, and Gosling and Stone’s voices work beautifully together and alone. The dialogue for the film is strong, but there are times when the story becomes tangled in what it is trying to convey, leaving the film feeling drawn out and unfocused. The film manages to recover, but this does mean that the film can feel drawn out and much longer than its 128 minute running time.
As director Damien Chazelle casts the Hollywood studio system as a character in the film, making it both the thing that draws the two characters together and pulls them apart. The film has an old-fashioned feel in the best possible way, feeling both like a Gene Kelly musical of the past, and a modern love story. The songs are evenly spread throughout the film, which never feels as though it is laden with music at the expense of story or honest conversations. There are times when the pacing struggles with the time frame of the story, and untangling story threads means the film feels sluggish. It is a delight to spend time with Sebastian and Mia, but the film often feels way longer than it actually is.
In all, ‘La La Land’ is beautifully old-fashioned, while breathing fresh air into the musical genre, which of late seems to be populated with jukebox musicals and stage shows being dragged onto the screen. Gosling and Stone are wonderful together, and make the characters feel real, and their connection strong. Chazelle’s script and songs are strong, but there are times when the story trips over itself, and the pacing grinds to a halt. ‘La La Land’ is something special, however, and Gosling and Stone get this love story singing.
RATING: 4/5
Review by Brogen Hayes