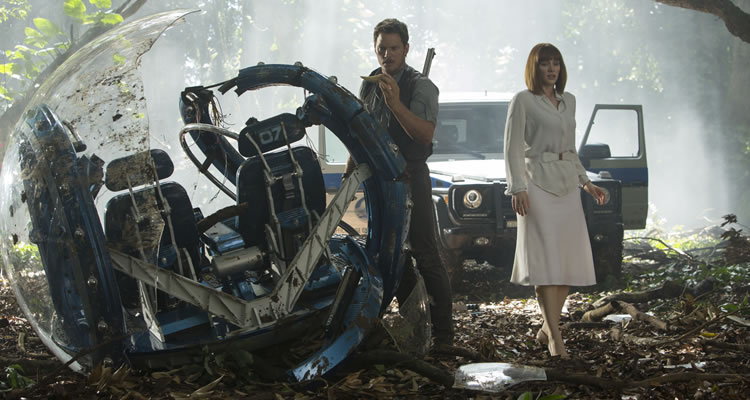 THE PLOT: Little dinosaur-loving tyke Gray (Simpkins) and cool teen brother Zach (Robinson) are being packed off by mum (Greer) and dad (Buckley) to spend some time with their somewhat estranged aunt Claire (Dallas-Howard) – who just happens to manage Jurassic World, the sprawling dinosaur resort out in Costa Rica that attracts 20,000 visitors a day. The numbers have been down, and Claire is keen to impress Jurassic World’s fun-loving owner, Masrami (Khan) – and so, she’s greenlit a new bigger, better, stronger, more vicious dinosaur. It’s a recipe for disaster, as far as dinosaur whisperer Owen (Pratt) is concerned, and when the big brute escapes, he’s quickly proved right. Still, at least nasty mercenary Hoskins (D’Onofrio) may finally be able to unleash his killer raptors…

THE VERDICT: It’s been 14 years, but it looks, and feels, and sounds like it’s still the 1990s with this somewhat join-the-dots Jurassic Park sequel. From the Spielberg family (hey, mum and dad are getting divorced!) to… well, just about everything here. Even all the evil GMO shenanigans seems dated, with the only noticeable concession to the 21st century seems to be crappy mobile phone coverage.

Thankfully, all the creaky old conventions and standard-issue character types fade somewhat in the second hour, as the chasing, bonding and heavy breathing just two feet away really kick in. You know from the start that stuck-up, Wintour-wigged Dallas-Howard and sensitive hunk Pratt will take the screwball comedy path to that kiss, that generation-gap, chalk-and-cheese brothers Gray and Zach will go on an emotional journey together, that Goodzilla will beat the shit out of Badzilla, and that fatso Vincent D’Onofrio will die a gloriously horrible death. That director Colin Trevorrow (hands up who thinks he had any real power making this movie?) and his regular screenwriting partner Derek Connolly (they made 2012’s so-so Safety Not Guaranteed) pull it all together in the second half, and delivers a movie that should thrill your average 12-year-old boy, deserves some kind of pat on the back. Hardcore fans of the franchise may, of course, prefer to slap him across the back of the head.
RATING: 3/5

THE PLOT: 20 years after the disastrous events of JURASSIC PARK, the park is finally open to the public, but the public are growing weary – ‘No-one’s impressed by a dinosaur any more’ complains park operations manager Claire (Bryce Dallas Howard). To rejuvenate interest in the park, the team have genetically engineered a dinosaur to be bigger louder and with more teeth, but the team soon learn that they have created an intelligent killing machine bent on staying at the top of the food chain.
THE VERDICT: Blockbuster season is on us again; with Mad Max: Fury Road barely in our rear view mirror, JURASSIC WORLD roars into cinemas this week, bringing with it a healthy dollop of nostalgia, some new thrills and a bigger, scarier monster.
Bryce Dallas Howard leads the show as Claire, a control freak who sees the park an enterprise, seemingly forgetting that the creatures on Isla Neblar are living, breathing animals. Much like Richard Hammond – RIP – she wears white throughout the film, her wardrobe dishevelling as she becomes more and more of a bad ass. Chris Pratt plays Owen; a former Marine who was brought into try and train the Raptors. Pratt is as wild as Howard is tame and, for the first half of the film, behaves like a typical misogynist. Thankfully this mellows as the film goes on. The kids in peril – there always have to be kids in peril – are played by Ty Simpkins and Nick Robinson, Vincent D’Onofrio turns up as a character rather similar to the ill-fated Nedry and BD Wong returns as Dr Wu.

The story, written by Rick Jaffa, Amanda Silver, Derek Connolly and Colin Trevorrow, is really remarkably similar to that of Jurassic Park, only this time the park is open. The dialogue, sad to say, is filled with exposition and is rather clunky, but there are plenty of callbacks to the original for the fans in the audience, but even these become too much after a while. The relationship between Howard and Pratt’s characters is troubling to begin with – misogyny flies across the screen whenever they are together – but as the peril becomes more perilous, this evens out, with Howard getting her moment of glory in the end. Why she kept her heels on for the entire film is beyond explanation though. As well as this, there often feels like there is a little too much going on in Jurassic World, with the threads of story not always fitting together well, too much set up and exposition and a rather silly subplot turning up every now and again. That said, there are plenty of giggles to be had, and a couple of conventions get, if not quite turned on their head, then gently angled in a different direction.

It’s hard to imagine how director Colin Trevorrow made the journey from SAFETY NOT GUARANTEED to JURASSIC WORLD, and although he manages his job competently for the most part, there is very little evidence on screen that the film was not directed by Speilbergbot 3000 or similar. The dinosaurs suffer slightly through the overuse of CGI – one of the things that made the original film feel tangible and real was the use of animatronics – and as per usual, the 3D does little for the film as a whole.

In all, JURASSIC WORLD struggles under the weight of expectation from the original film, but there is plenty of fun to be had with the film. The dinosaurs are bigger and cooler, there are enough – although sometimes too many – callbacks to the original to make the film feel like part of the Jurassic Park universe and the final set piece is as big, silly and nostalgic as you could hope.