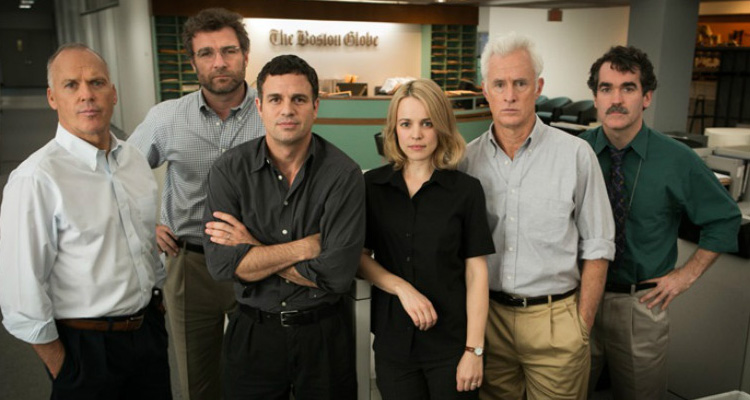 5 Journalistic Movies – From SPOTLIGHT to FROST/NIXON

‘Spotlight’ is released in Irish cinemas this week, and follows the Spotlight team at the Boston Globe, as they try to uncover the truth about clerical sexual abuse in Boston, which potentially dates back decades. Starring Mark Ruffalo, Michael Keaton, Rachel McAdams and Liev Schrieber, and directed by Tom McCarthy, ‘Spotlight’ has been nominated for a whopping six Oscars, including nods for best Picture, Best Director and acting nods for Ruffalo and McAdams.

Since ‘Spotlight’ has gathered so much attention from fans and critics alike, Movies.ie takes a look back over some of the best movies about journalism, and uncovering the truth.

ALL THE PRESIDENT’S MEN
Based on the book by Carl Bernstein and Bob Woodward, ‘All the President’s Men’ stars Dustin Hoffman and Robert Redford as Bernstein and Woodward, respectively, and tells the story of the two journalists trying to investigate the Watergate scandal, which led to a constitutional crisis in the US.
Directed by Alan J. Pakula, the story at the heart of the film starts simple, with a suspected burglary at the Watergate Complex in Washington DC, but quickly snowballs into a story that involves corruption and law breaking that goes right to the top. The film is a taut thriller that not only examines American journalism, but also the American political system, and the repercussions of trying to uncover the truth.

ALMOST FAMOUS
In Cameron Crowe’s 2000 movie, Patrick Fugit plays William Miller, a high school kid who wrangles his way into going on tour with the biggest band of the time; Stillwater. The film also stars Kate Hudson, Billy Crudup, Jason Lee, Philip Seymour Hoffman and Frances McDormand, and is loosely based on Crowe’s own experiences as he tried to break into the world of music journalism, and toured with bands including Poco, The Allman Brothers Band, Led Zeppelin, the Eagles, and Lynyrd Skynyrd.
As well as being a film filled with great songs, ‘Almost Famous’ is a coming of age tale, as William meets his heroes, falls in love, and soon realises that the people he worships are as fallible and flawed as he is. As well as this, even though he tries his best, William discovers that writing a great piece of music journalism is just as tough as writing an iconic song.

FROST/NIXON
Another film about the Nixon administration, but this one takes place after Nixon resigned from office in 1974. Ron Howard directed this film, which is set in 1977, when UK journalist David Frost (Michael Sheen), who sets out to interview the disgraced president – played by Frank Langhella – about his career, and the circumstances that led to his resignation.
‘Frost/Nixon’ is about the famous interviews, but it is also a story of a tenacious journalist knowing that getting the answers to tough questions will make his career, and knowing that he cannot let go until he gets those answers. The film is laden with tension, and it is a treat to watch two incredibly powerful actors go head to head on screen.

SHATTERED GLASS
Stephen Glass (Hayden Christensen) is a writer for The New Republic magazine, where he is liked by his colleagues and praised for his colourful and entertaining stories. However, when Glass publishes a story about a 15-year-old hacker who has risen through the ranks of the company he hacked, alarm bells sound and an investigation reveals that this article, and many others by the young journalist, have been fabricated.
Directed by Billy Ray, ‘Shattered Glass’ is the story of a young man trying to make a name for himself in a tough industry, who seems to have no qualms about making up stories to get to where he wants to be. As well as this, the film also shows off the journalistic investigation by Adam Penenberg at Forbes Digital Tool that led to Glass’ fictions being exposed. As well as Christensen, ‘Shattered Glass’ stars Peter Sarsgaard, Chloë Sevigny, Hank Azaria, Melanie Lynskey and Steve Zahn.

ANCHORMAN 2: THE LEGEND CONTINUES
Yeah we know that ‘Anchorman 2: The Legend Continues’ is not a film about hard hitting journalism or the discovery of corruption, but Adam McKay’s Will Ferrell vehicle is an insight into how news reporting changed and developed with the birth of the 24 hours news cycle in the late 1970s. This time out, Ron Burgundy, Brick Tamlam, Champ Kind, Brian Fantana and Veronica Cornigstone have to deal with the changes in the news room, and come up with a new way to grab audiences; sensationalism.
There is very little about ‘Anchorman 2: The Legend Continues’ that is based on true stories but underneath Ron Burgundy’s sexism and racism is a comment about the struggle that women and minorities went through in order to be taken seriously in an industry dominated by white men. Also, it’s damn funny.

‘Spotlight’ is released in Irish cinemas on January 29th 2015. Watch the trailer below…