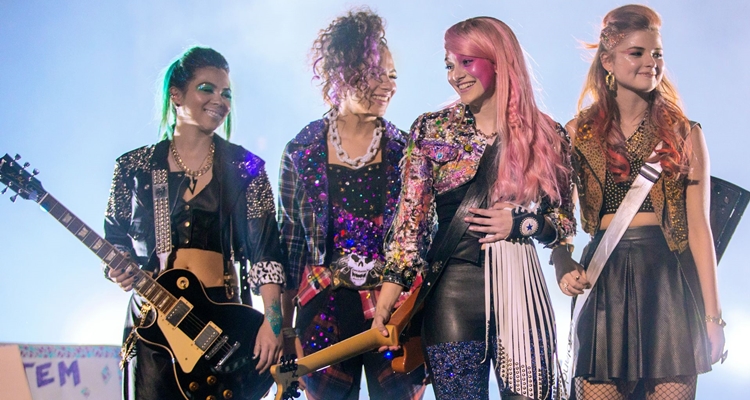 Jem and the Holograms

trong>JEM AND THE HOLOGRAMS (USA/PG/118mins)
Directed by Jon M. Chu. Starring Aubrey Peebles, Juliette Lewis, Stefanie Scott, Aurora Perrineau, Hayley Kiyoko, Molly Ringwald.
THE PLOT: When the home Jerrica (Aubrey Peeples) shares with her aunt, her sister and her aunt’s two foster daughters comes under threat, shy and retiring Jerrica finds herself recording a song she wrote, under the name of Jem – the pet name her late father had for her. When the song goes viral and Jerrica is tracked down, she finds herself playing sold out shows with her sisters and chasing down clues that her father left her, but when the time comes for her to go solo, Jerrica faces a hard choice.
THE VERDICT: ‘Jem and the Holograms’ is a new live action version of the wildly successful 1980s cartoon from Hasbro. Brought into the present day, the film sees Jem and her sisters obsessed with YouTube, but without the 1980s kookiness that made the TV series such a delight, ‘Jem and the Holograms’ is definitely a one hit wonder.
The cast of the film are charming enough, although they are never really given a chance to be anything other than familiar and rather predictable. Aubrey Peebles takes on the lead role, with Stefanie Scott, Aurora Perrineau and Hayley Kiyoko making up the Holograms, Molly Ringwald playing Aunt Bailey, Juliette lewis playing Erica Raymond and Ryan Guzman playing love interest Rio. The film is filled with cameos from YouTubers, as well as more familiar faces including Chris Pratt and Dwayne Johnson.
Ryan Landels’ screenplay quietly changes all the outrageous details of the cartoon that made the show work in the first place. Gone is the foster home that Jerrica runs with her friends, Eric Raymond is now Erica, and there is no sign of the bad gal Misfits until the post credits scene. As well as this, Synergy is now 51N3RGY, and although Jerrica’s father still created the robot, she is now more of a Star Wars style droid than a smart and interactive artificial intelligence. So what does this mean for the film? Well, without the elements that made the show fun, ‘Jem and the Holograms’ ends up feeling rather like ‘Josie and the Pussycats’, but not funny, or any generic film about fast fame and the repercussions that you care to mention.
Director Jon M. Chu makes ‘Jem and the Hologram’s a rather vanilla rags to riches and self actualisation story, while stripping out anything that could make the film feel new. The songs feel over produced, although they are fairly decent pop songs, but then its almost an hour before Jem even manages to take to the stage, leaving the film feeling drawn out. Splitting the narrative between fame and searching for the components of 51N3RGY shatters the focus of the film, so the audience are never really sure if this is a rags to riches story, a mystery or a different mystery,
In all, ‘Jem and the Holograms’ strips away all the good stuff from the cartoon and just keeps the name. There are no holograms, no Misfits until the credits, no real mystery and Jem has been turned from a girl trying to save her father’s legacy into a girl trying to survive in the YouTube generation. The songs are OK though.
RATING: 1.5/5
Review by Brogen Hayes

Review by Brogen Hayes
1.5
No Jem