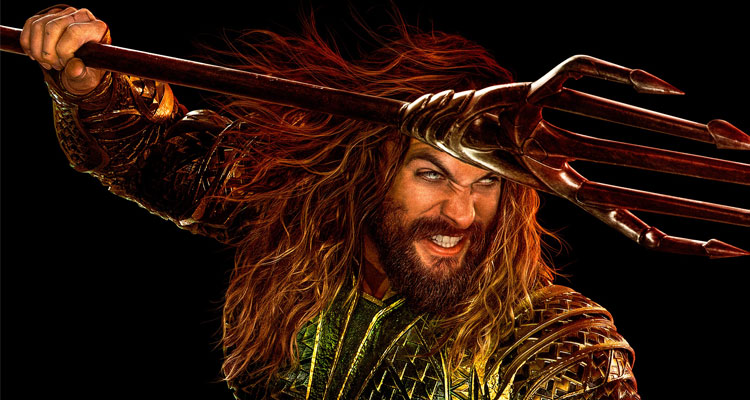 He was a founding member of the original ‘Justice League’ in 1960, so its about time Aquaman is given the big screen treatment. The underwater hero has been a comic book favourite since his debut in 1941, he pops up in this month’s highly anticipated JUSTICE LEAGUE movie played by Jason Momoa, best known for his role as Ronon Dex in ‘Stargate Atlantis’ and Khal Drogo, leader of the Dothraki in ‘Game Of Thrones’. In this interview the larger than life star fills us in on his biggest role to date.

What went through your mind when director Zack Snyder first approached you about playing Arthur Curry / Aquaman and reinventing this iconic Super Hero for a new generation?
When Zack first approached me, it was a bit of a mystery because when I went in for the audition, he wanted me to read for Batman – and Ben [Affleck] had already been cast in the role by that point.  So, I knew something fishy was going on and just read the lines with a lot of attitude, like I didn’t care what was on the page [laughs]!  And then Zack said to me, ‘Do you know who I want you to play?’  I said, ‘Oh, yeah, I’ll be a villain or some bad dude who comes in and fights Batman – sounds like fun.’  He said, ‘I want you to play Aquaman.’

So, I was just standing there, kind of in shock.  All I could think of was the traditional Aquaman from the comics – who is white and blond and wears the orange and green costume.  I thought he had to be joking… but Zack had this look on his face.  He said, ‘Hear me out,’ and told me that he wanted the Aquaman in this film to be an outsider, along the lines of Clint Eastwood’s character, the Outlaw Josey Wales.  I was born in Hawaii and raised in Iowa, and basically grew up an outsider, so I could definitely identify with that.  I also liked that Arthur is a half-breed – half-Atlantean and half-human – and was really interested in the idea of him being this brown-skinned Super Hero who is part of two worlds but doesn’t belong to either one.  I think that’s pretty special.  And me being a Hawaiian, Aquaman’s mythology also resonated with me because we have water gods in our culture – and that goes for many islands.  That’s why it feels like such an honor to play this guy.

How much did you know about the Justice League prior to becoming involved in the film?  Were you a comic book or Super Hero fan growing up?
Absolutely.  I was a big comic book fan.  I read a lot of different comics when I was a kid, and obviously loved Batman and Super Hero movies in general.  When Tim Burton’s Batman came out, it just blew my mind; I was amazed by that film.  But I hadn’t read a lot of Justice League prior to this film, so I did my research.  I also had the opportunity to meet with [producer] Geoff Johns, and he’s just a wealth of knowledge about Aquaman and the entire DC universe.

When you were finding your way into the character, were there aspects of Aquaman that were fun to play and others that were more of a challenge?
Zack encouraged all of us in the cast to bring our own personalities to the characters, and that was really interesting.  I’ve never played anyone like Arthur before – someone who’s defiant and an outcast and a rascal.  So, I got to be grumpy and ornery and exercise a lot of layers I’ve never gotten to bring to roles before and that was a lot of fun.

For me, the biggest challenge was knowing that we’re only seeing a glimpse of this epic journey that Arthur goes on to find his place in the world and become the great warrior and king that he is.  When we meet him in Justice League, he’s this gruff, surly rebel, but we don’t know what this kid went through to get that way or who he’s going to become.  We find him in a little fishing village in Iceland, among these villagers who are on the absolute fringe of society.  They kind of look at him as a god because when fish aren’t around or supply lines are cut off, he helps them.  They never asked for it.  He’s just taking it on himself to protect these people and provide for them.

So, when Bruce Wayne shows up looking for Aquaman, they’re reluctant to give him up.  Bruce figures it out, of course, but Arthur makes it clear that he has no interest in helping Batman or anyone else.  He just wants to be left alone.  It’s only later, when he realizes that the world really is at stake – not just the over the land, but under the oceans as well – that he knows he has to become a man and do his part.  And as he explores his powers and begins to understand who he is, only then does he start to actually start to believe in himself.

You’re a part of this fantastic ensemble cast bringing these larger-than-life heroes to life – Ben Affleck as Batman, Gal Gadot as Wonder Woman, Ray Fisher as Cyborg and Ezra Miller as The Flash.  What was it like the first time all of you came together on set in you full Super Hero glory?
I played it cool, but I was totally geeking out on the inside [laughs].  We really loved being on this journey together, and always wanted to see each other on set.  Whether it was doing team-building scenes or these ambitious, complicated stunt sequences, we’d always support each other and try to make each other laugh; it was always a joy.

One of the great things about having these actors in these roles is that they’re all just so perfectly cast.  Batman is my favorite character, and when I first saw Ben Affleck in that cape and cowl, it was so cool.  He’s an amazing Batman.  And Gal Gadot is the perfect Wonder Woman.  She is unbelievable and that movie was unbelievable.  She’s just this powerful presence, but so warm and absolutely stunning.  And I can’t think of a better choice for The Flash than Ezra.  So intelligent, so witty and just a beautiful creature – they only made one of Ezra.

And then there’s Ray as Cyborg, and, to me, he has the hardest role – to be able to play this half-man/half-machine – and yet he brought so much humanity and gravity to it.  But on set, we really had to use our imaginations to picture Ray as Cyborg.  We’d all be in our costumes, and Ray would be in these polka-dot pajamas for the visual effect component of Cyborg.  So, we had a lot of fun giving him crap about that [laughs].  But Ray is obviously an amazing actor, and we had a great time playing the dynamic between Arthur and Victor.  Arthur doesn’t trust Victor at all, and they’re at each other’s throats a lot of the time, but then they become brothers, you know?

As for my character, I don’t mind sayin’ that I’m probably the greatest Aquaman that’s ever lived.  There’s not exactly a lot of competition, so in that sense, it’s cool not be Batman [laughs].  But it’s great to get to set the tone for this character on screen, and I’m interested to see what fans think of this iteration of Aquaman.  It’s definitely not what they’re used to seeing in the comics, but hopefully it will be true to the Aquaman they know.

You recently wrapped filming Aquaman’s first-ever solo feature with director James Wan.  Can you give us a tease of what audiences can expect?
All your questions will be answered next year [laughs].  The cool thing about Aquaman is that it’s an origin story, and where we start and where we end up is just going to be amazing.  It really is a beautiful movie, and I feel really lucky to be part of it.  James is fantastic to work with and what we shot down there in Australia was incredible.

We’ve never seen an epic adventure under the ocean like this, and we haven’t seen an undersea world like the one we’re creating in the movie.  I’m already excited to watch the movie with my children, and for other kids to see it.  My son plays with Batman non-stop and it’ll be cool to see what he thinks now that there are Aquaman action figures.  I haven’t made too many movies that my children have gotten to watch, so I’m really looking forward to that.

Why do you think it is about these Super Heroes that continues to resonate with people all over the world for generation after generation?
What I love about the Super Hero phenomenon in general is that I think having heroes who are so aspirational really helps people overcome adversities in their own lives.  They help us believe in ourselves – and all of us need that.  We all need to be inspired, and these characters teach us that we too can be heroes; we too can help others, and try to make this world we’re in a better place.

JUSTICE LEAGUE is at Irish cinemas from Nov 17th