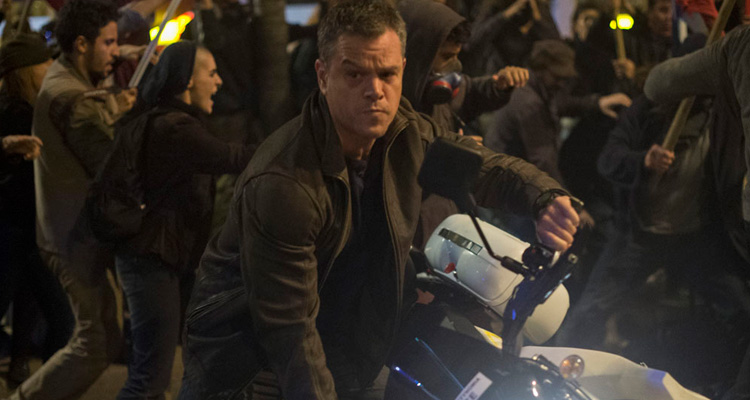 The Plot: Last seen swimming away to his freedom, rogue CIA operative Jason Bourne (Matt Damon) comes out of the shadows several years later. Living off the grid in Greece, he is contacted by former colleague Nicky (Julia Stiles). Now working as a hacker in Iceland, she has vital information about the formation of the Treadstone project. It is not long before the CIA are alerted, via Director Dewey (Tommy Lee Jones) and his sharp-eyed agent Heather (Alicia Vikander). Heather believes that Jason can be brought back into the fold, whereas Dewey thinks that the best thing to do is liquidate Jason once and for all, before he exposes more shady CIA secrets…

The Verdict: It has been 9 years since The Bourne Ultimatum. A fourth instalment in what initially appeared to be a fully-formed trilogy can raise questions as to the real motivations of the cast and crew involved. It did not really work for Indiana Jones, so could it work for Jason Bourne? There was a decent stab at a spin-off film with The Bourne Legacy in 2012, featuring Jeremy Renner, but it lacked the dynamite duo of Greengrass and Damon. Saying that they would not make another Bourne film unless they both agreed on it was a wise move.

The wait was worth it, because the world has changed a lot in 9 years. The rise of hackers like Edward Snowden and organisations like Wikileaks, along with the increased usage of covert surveillance techniques, even on social media platforms, form the backdrop of the film. The change in title to just simply Jason Bourne is indicative of a move by Greengrass and Damon towards giving the character some closure. There is still unfinished business with the CIA, as they are now launching a sinister new programme called Ironhand. These spooks just do not learn, do they?

Greengrass and his co-writer Christopher Rouse give Jason a harder, rougher edge this time around. Much like another JB (Jack Bauer), the years living off the grid have taken their toll. But this is still the Jason Bourne we all know and admire. His return is a most welcome one. In a summer of blockbusters that have been middling at best, this film is like a much-needed blast of adrenaline. It is essentially a 2-hour chase film, as Greengrass hops his cameras around the globe, from Greece to Las Vegas, via Berlin and London. Each location serves a particular narrative function, also drawing out the story of a deadly ‘Asset’ (Vincent Cassel).

The scene is set early on with a thrilling chase through a protest in Athens that soon turns into a riot, as Jason and Nicky elude the CIA via the crowds. The choreography, stunts and editing in these sequences are first class, really drawing you into the imminent danger of the situation. Later sequences maintain that momentum, topping off the car chase in Ultimatum with even more car-nage along The Strip in Las Vegas (beat that, James Bond). It’s a breathlessly exciting film, which also pauses to hit those important character beats too. Damon, now well settled into the role, is a force of nature throughout and he’s well-supported by the excellent Vikander. In her first post-Oscar role, she takes what could have been a basic two-dimenstional CIA agent and makes her so much more. She will be a talking point as the credits roll.

Jason Bourne feels fully justified, as the film develops the character further, gives him new allies and enemies and keeps him relevant and driven. The film works on every level while never losing focus on the main character. There may be room for another film here, but once again it could only work with the magic formula. We can only hope that Greengrass and Damon are encouraged to make another film, as Jason is such a distinctive, iconic character. Welcome back Jason Bourne. We missed you.