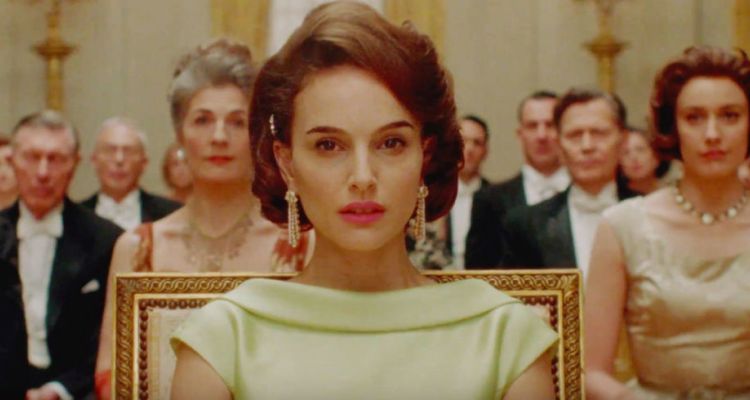 JACKIE (Chile | France | USA15A/100mins)
Directed by Pablo Larraín. Starring Natalie Portman, Peter Sarsgaard, Billy Crudup, Greta Gerwig, John Hurt.
THE PLOT: After the assassination of her husband John F. Kennedy (Caspar Phillipson) in November 1963, Jackie Kennedy (Natalie Portman) finds herself not only dealing with the trauma of her husband being shot while sitting beside her, but also organising the assassinated President’s funeral, the almost immediate loss of her standing as First Lady of the US, moving out of the home that she had lovingly restored and considering her husband’s – and her legacy – for generations to come.
THE VERDICT: There has been a lot of talk about ‘Jackie’, director Pablo Larraín’s first film to be shot in the US, since Steven Spielberg was once attached to the project as producer, when it was to be a HBO miniseries, and Natalie Portman has been Golden Globe nominated for her performance as the bereaved, strong but fragile Jackie Kennedy.
Natalie Portman, as the title might suggest, is the heart and soul of ‘Jackie’. Framed around an interview with an unnamed journalist – played by Billy Crudup – the story of the film is told through flashback, and Portman does an impressive job in making Jackie a strong but guarded woman, yet one that is fascinating and difficult to look away from. It is in the quieter moments of the film that Portman truly excels – although scenes of ‘Jackie’ in the immediate aftermath of JFK’s shooting are incredibly powerful – and Portman is luminous and utterly engaging in the lead role. The rest of the cast features Peter Sarsgaard in a pivotal role as Bobby Kennedy, Billy Crudup as the challenging and challenged journalist around whose interview the film is framed, John Hurt sporting a great Irish accent, as well as compassion and heart as Jackie’s priest, as well as Greta Gerwig, Richard E. Grant, Beth grant and John Carroll Lynch.
It is almost surprising that the screenplay for ‘Jackie’ was written by Noah Oppenheim, whose previous films are the YA dystopias The Maze Runner and Allegiant, since this is a complex, dignified and telling portrait of grief, legacy and fame. Natalie Portman has some great lines as Jackie, and is always biting, smart and quick, and it is this that allows the audience to truly get to know the character. Focusing the film on the four days after JFK’s assassination means that ‘Jackie’ is a film about grief and trauma – themes that are universal, but also personal and private – but shining the spotlight of fame and legacy on these, since Jackie was a public figure, makes for compelling viewing. One complaint, if there is one to be made, is with the final few minutes of the film, which has the feeling that the film could end at any time, but seems to drag its heels.
As director, Pablo Larraín makes sure that the film is firmly focused on the personal, the feeling of being left behind to deal with the trauma of having someone snatched away so suddenly and so cruelly. Larraín coaxes a wonderful performance from Portman, who could easily have hidden behind Kennedy’s distinctive accent and manner of speaking, but makes this a facet of her personality, rather than a curiosity. Although ‘Jackie’ has wonderful dialogue, it is in the quiet, almost silent moments of the film that it excels, with Jackie walking through the halls of the White House, almost like a ghost. Larraín excels most in humanising a woman that many know the image of, but few her personality, and allowing the audience to root for a bereaved woman whose world has suddenly been turned upside down.
In all, ‘Jackie’ is a fascinating and compelling piece of work. Natalie Portman cements her place as a powerful actress, and excels at humanising Jackie Kennedy and bringing her to life. The rest of the cast do well, and Larraín directs carefully, the only complaint about the film is that with several false endings in the final few moments, ‘Jackie’ begins to feel drawn out, even though the pacing until then has been strong. That said, ‘Jackie’ is a powerful and engaging portrait of grief, fame and strength.
RATING: 4/5
Review by Brogen Hayes