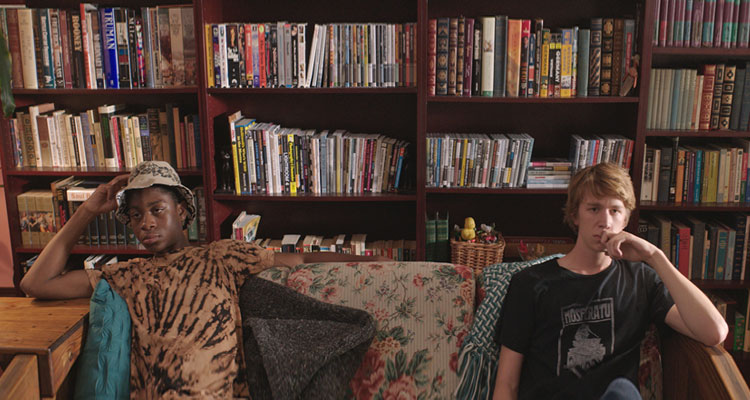 Interview with Me & Earl & The Dying Girl cast

Now showing in Irish cinemas, ‘Me And Earl And The Dying Girl’ was the winner of the Grand Jury Prize and the Audience Award at this years Sundance Film Festival. The film from director Alfonso Gomez Rejon is the moving story of Greg (Thomas Mann), a high school senior who is trying to blend in anonymously, avoiding deeper relationships as a survival strategy for navigating the social minefield that is teenage life. He even describes his constant companion Earl (RJ Cyler), with whom he makes short film parodies of classic movies, as more of a ‘co-worker’ than a best friend. But when Greg’s mom (Connie Britton) insists he spend time with Rachel (Olivia Cooke) – a girl in his class who has just been diagnosed with cancer – he slowly discovers how worthwhile the true bonds of friendship can be.

We met up with THOMAS MANN (Greg), OLIVIA COOKE (Rachel) & R.J. CYLER (Earl) to talk about the new film.

Movies.ie: You guys [Thomas and Olivia] have been involved in some big junkets before, but this one has taken you all around the world, but I understand that this is the end of it. Has the actual junket process been?

Movies.ie: What has the feedback been like for the movie so far?

OLIVIA COOKE: Yeah, I just thank that overall been quite a cathartic experience. Even if we just get that one person who comes up to us and says it’s helped a lot, then you know you’ve done your job.

THOMAS MANN: I mean, just someone coming up to you and telling you that the movie affected them and helped them through something and helped them – There’s this whole thing that Jon Berenthal’s character says about learning about people after they’re gone, and it’s something that people really need to believe and want to believe, and that’s just been really gratifying. I don’t know that we were prepared for that.

Movies.ie: On top of it being a powerful film, it’s also very, very funny, and you work with some really, really funny people in the people like Nick Offerman and Molly Shannon. Did you get to learn any comedy tip or comedic acting tips from them?

OLIVIA COOKE: Molly Shannon, when she gets drunk – well, when she’s acting drunk, she’ll spin around really, really fast and then she goes “Action!”.

THOMAS MANN: Yeah, she’ll be stumbling around and you’ll start laughing, because the first time she did it I didn’t realise she was doing it to be drunk and I thought they were already rolling on her spinning around and I thought that was a choice and I thought ‘I don’t understand this!’ Like, I don’t know, she would just do it differently every time, and Nick the same thing, he would change up his line. In the first take he would say his line but then say something else every other time. It was just so spontaneous and in the moment and so present.

Movies.ie: I know the film only took something like twenty-four days to shoot, but did you have a particular favorite day or favorite scene during the shoot?

THOMAS MANN: It was the longest day. It was good and bad, it was like a rollercoaster of emotions, but it was incredibly – and we keep saying this word – but it was cathartic, because everything had come to a head at the point.

OLIVIA COOKE: Yeah, it was very special, and also we shot the scene where Greg screens the film that he made for [Rachel] for the first time and that was the end of the movie and it just kind of summed up our experience, we were in this moment we were just watching it over and over again, and it was beautiful.

Movies.ie: I don’t know if you know this, but they show these films to critics at about ten in the morning, so I came out of the cinema before midday, already crying, and people coming up and asking me was I okay.

Movies.ie: Well, since you’re all such movie fans in the film, I think it’s only fair to ask you a few movie questions, so just give me the first answer that comes to mind. Favorite high-school movie?

OLIVIA COOKE: I think I’m going to have to go with The Breakfast Club until I think of a better one, it’s a good one.

R.J. CYLER: Project X. Because that would be the perfect ending to my high school.

THOMAS MANN: You don’t have to say that, man!

R.J. CYLER: I’m not just saying that because I have to say that. If I could party like that night, that would be fun!

THOMAS MANN: Awh, I should have said Superbad! That was a really memorable movie, I watched that movie so many times in high school, and Michael Cera and Jonah Hill were perfect in that movie, so perfectly matched.

Movies.ie: Just the first one that comes to mind!

OLIVIA COOKE: Frances Ha! Greta Gerwig and… I don’t know what the other actresses name is, but she’s really good and I really liked that. I think it was really well depicted.

R.J. CYLER: But that’s not a high school movie!

THOMAS MANN: No, it’s not high school, but it’s a good friendship!

Movies.ie: Last one for this rapid fire round… The film most likely to make you cry?

Movies.ie: The scene in the hospital where he’s saying goodbye to Angelica Huston? I was destroyed.

THOMAS MANN: Yeah, and when he has that freak-out in the car, too.

Movies.ie: Ah, I beg your pardon. But Thomas, I have to single you out because of the Irish connection. You’re working with an Irish director on your new film, what can you tell us about that?

THOMAN MANN: Yeah, Gerard Barrett! I just wrapped that actually. It’s called Brain On Fire and Chloe Moretz is the star of it and I play her boyfriend. It’s based on the memoir by Susanna Cahalan, and Chloe plays Susanna, and she had this rare autoimmune disease that the doctors couldn’t diagnose for the longest time, and it’s about her sort of spiralling into madness before anyone really knows what’s wrong with her. It’s really emotional and intense.

Movies.ie: Have you seen Glassland, his previous film?

THOMAS MANN: Yeah, I seen it Sundance and it was incredible. That was actually where I met him, so everything’s kinda come full circle now.