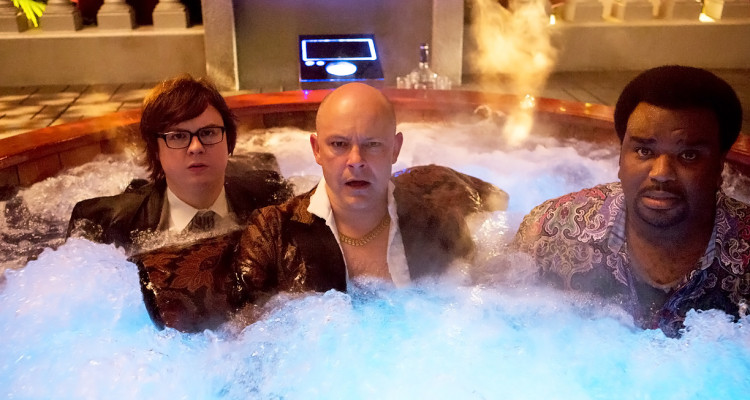 THE PLOT: After he is shot in the crotch, Lou (Corddry)’s friends jump into the hot tub time machine to go back to the past, and stop the shooting ever happening. Trouble is, the time machine is not predictable and the gang end up 10 years in the future and make friends with Adam’s son, Adam Jr (Scott). The gang must find the shooter and get back in time to save Lou’s life before they mess up the future too badly.

THE VERDICT: The first HOT TUB TIME MACHINE movie was unexpectedly fun, but since the sequel was not press screened in Ireland, it’s fair to say my hopes were lowered going in. There are times when the film works on it’s own level, and some of the ad-libbed lines are genuinely funny, but when added to seemingly endless dick and anti-gay jokes, the shine of HOT TUB TIME MACHINE 2 soon wears off.

The cast do fine with what they are given, and there are some genuine moments of connection between the characters, but this does not last, and its back to misogyny, testicle jokes and murderous cars faster than you can say ‘Great Scott!’.
There seems to be some audience fatigue at films filled with tasteless and low-brow jokes that rely on misogyny and anti-gay sentiments to get laughs, but this does not stop HOT TUB TIME MACHINE 2 from rolling out as many vulgar jokes as possible in the name of comedy, but these are jokes that truly do not land. The cast are better than this, and they seem to know it, although Corddry is high energy enough to power a small city.

In all, HOT TUB TIME MACHINE 2 sets out to offend as many people as possible with its cheap, tacky and tasteless brand of humour. Few precious moments of genuine emotion or comedy are quickly overshadowed by seemingly endless dick jokes, misogyny and homophobic sentiment. A shame, the first film was a little gem, but this one would be better off erased from existence.