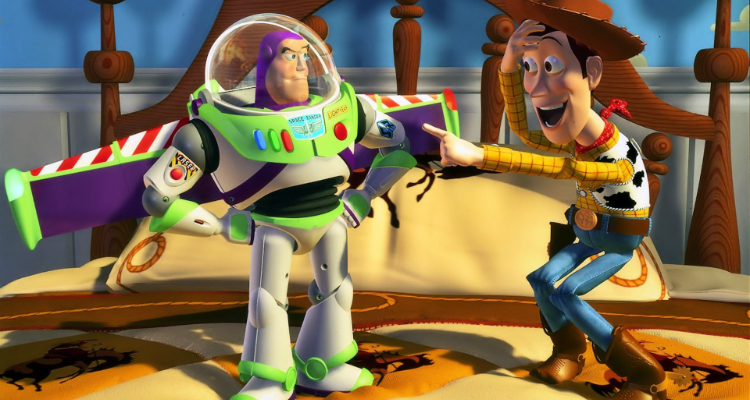 Horrible Neighbours in the movies… From ‘Bad Neighbours’ to ‘Toy Story’

‘Keeping up with the Joneses’ is released in Irish cinemas this week, and stars Isla Fisher and Zach Galiafinakis as a suburban couple – the Gaffneys – who always though their next door neighbours the Joneses – played by Gal Gadot and Jon Hamm – were the perfect quiet couple. Of course, nothing is ever that simple, and the Gaffneys find themselves drawn into an international espionage plot when they discover that their suburban neighbours are actually government spies.

To celebrate the release of ‘Keeping up with the Joneses’ in Irish cinemas, Movies.ie have taken a look back over movies to feature neighbours from hell. Keep reading to find out more.

BAD NEIGHBOURS
No-one ever wants to live next door to a frat house, especially when you believe the neighbourhood to be suburban and perfect for starting a family, so when Mac (Seth Rogen) and Kelly (Rose Byrne) move to suburbia and struggle to come to terms with the fact that they are parent, the last thing they need is a Frat House from the local university moving in next door to them. Faced with the prospect of loud parties and obnoxious neighbours, Mac and Kelly go and introduce themselves to the Head of the Frat, Teddy (Zac Efron) in the hopes of forming a good relationship with their new neighbours. It is not long, however, before both sides realise that their differences mean this is war.
The rule of ‘Bad Neighbours; seems to be if you can’t beat them, beat them at their own game, and this is exactly what happens as Mac and Kelly go to war with Teddy and the frat, with the lengths each side goes to to survive becoming ever more ridiculous. Of course, there is a sequel to ‘Bad Neighbours’ – ‘Bad Neighbours 2’ – so it seems that no matter what they do, Mac and Kelly and their young family are doomed to live next door to a constant reminder of their youths and what they have left behind.

REAR WINDOW
Alfred Hitchcock’s 1954 film stars James Stewart as L.B. “Jeff’ Jeffries, who is confined to a wheelchair and stuck in his New York apartment while he recovers from breaking his leg. When a heat wave hits, Jeff’s neighbours open their windows to stave off the heat, and he soon realises that the people who live around him lead far more interesting and complicated lives than he at first thought. As he spies on his neighbours however, Jeff becomes convinced that travelling salesman Lars Thorwarld (Raymond Burr) has murdered his bedridden wife, even though none of his friends and confidants believe him.
‘Rear Window’ is the perfect example of Hitchcock at his mesmerising best, and although Jeff has reasons for his suspicions, his habit of spying on his neighbours is nonetheless a creepy one. That said, Hitchcock makes sure that the audience has as many doubts as Jeff, and if Lars really did kill his wife, is Jeff’s habit of spying really that bad?!

FRIGHT NIGHT
When Charley Brewster (Anton Yelchin) gets a new neighbour, Jerry (Colin Farrell), he is initially more concerned about him hitting on his mum than anything else. It is soon revealed that Jerry has more on his mind than sex; he is a vampire. After his friend goes missing, Charley turns to the one person he thinks can help him, Las Vegas showman, Peter Vincent (David Tennant).
Although it may not be too concerning to live next door to a centuries old vampire in theory – especially if he keeps himself to himself – it is very clear that Jerry is not just doing renovations on his house at all hours of the night, he is hiding his victims throughout the house and creating a lair underneath the house. Not only must the noise from these “renovations” be incredibly disturbing, but the idea that Jerry is keeping his prey hostage is particularly horrible. Oh, and Jerry decides to dig up Cherley’s garden to blow up the gas main, destroying the house. This is one vampire we would not want to share an adjoining wall with!

NEIGHBOURS
Yes, we know that ‘Bad Neighbours’ was simply titled ‘Neighbors’ in the US, but this is another film of the same title. This 1981 film starring John Belushi and Dan Aykroyd focused on Earl Keese (Belushi), a mild mannered man living in the suburbs with his wife Enid (Kathryn Walker). Their lives are quiet and low key until they get new neighbours Vic (Aykroyd) and Ramona (Cathy Moriarty). The new neighbours impose themselves on the Keese family, and although he cannot say that they are purposefully doing anything wrong on purpose, Earl soon finds himself frustrated by the loud and gung-ho Vic, and flustered by the flirty Ramona. When low level resentment boils over into suburban warfare, Earl realises this is the most fun he has had in years, and faces the choice of staying with his family or following the fun.
‘Neighbours’ had a troubled shoot as Aykroyd and Beliushi continually clashed with director John G. Avildsen, and switched roles to play against type in this dark comedy. Nonetheless, the film caught the feeling of suburban boredom well, as well as the chaos that ensues hen a new dynamic is introduced to the neighbourhood. Worth watching if just to see Belushi play meek and Aykroyd obnoxious.

TOY STORY
When Andy gets a new astronaut toy – Buzz Lightyear (Tim Allen) – the dynamic between the rest of the toys in Andy’s toy chest is thrown off. Particularly upset is former favourite, cowboy doll Woody (Tom Hanks), and as he sets out to get rid of his nemesis Buzz, the two find themselves having to unite against the common enemy to survive; Sid (Erik von Detten) the kid next door who loves to torture innocent toys.
Although ‘Toy Story’ is a film about two characters putting their differences aside and learning to like each other, none of this would have been possible if they did not have to unite against Sid to survive. Not only is Sid destructive and mean, he pulls toys apart only to make them monster hybrids reminiscent of Frankenstein’s MonsterKeep; a fate that Woody and Buzz do not want to happen to them.

‘Keeping up with the Joneses’ is in Irish cinemas now. Watch the trailer below…