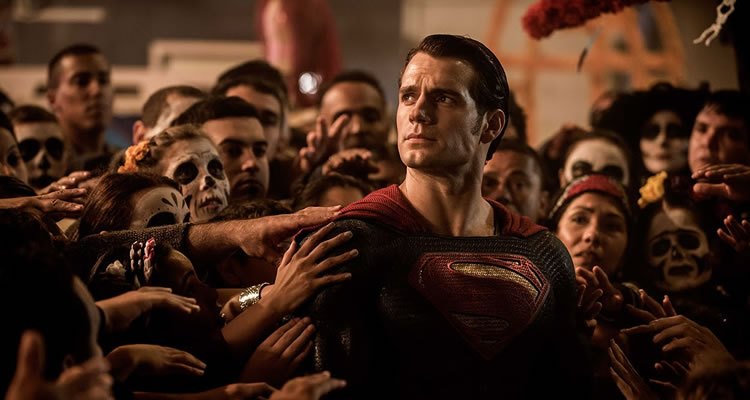 Co-starring in what will undoubtedly be one of, if not THE biggest film of the year, Henry Cavill has returned to the cape and tights of Clark Kent aka Kal-El aka Superman. This time he’s facing a world that is split between loving him after saving him from the evil Zod in Man Of Steel, while the other half is concerned he might single-handedly be the harbinger of their planet’s doom. We were lucky enough to get some one-on-one time with the guy who goes head-to-head with Bruce Wayne to talk about how Dawn Of Justice will change the comic-book movie landscape.

What were your first reactions when you got the script?
This isn’t the Batman that you saw Christopher Nolan make. This is Zack Snyder / Ben Affleck Batman, and you’ve got to focus on that, otherwise you just miss out on the whole character. And so it was just about finding my place within that storyline. […] Its always a fine dance when you’re bringing in lots of big characters into one movie. And especially these, because – I was thinking about this today – when you ask people ‘Name a superhero?’, before the Marvel march happened, how many people named Marvel superheroes? You named Batman, Superman, maybe Wonder Woman, Spiderman I guess was maybe one of them? And maybe Hulk? But to have too so iconic heroes in one movies requires a delicate dance and it’s one of those things which some people will agree with, and other people won’t. I think it’s been done just right, to introduce Batman, in a world in which Superman exists, and also give a taster of the Justice League. I think it’s done well, and I’m pretty sure that Zack was very conscious of that when he was putting it together with Chris Nolan.

And how does the arrival of Wonder Woman effect that delicate dance?
It just makes it more beautiful, I guess. (laughs)

Are you excited about the Justice League universe finally opening up?
I really enjoyed the (Suicide Squad) trailer, I thought it was great. I think its very exciting to see that kind of thing evolve, it’s very different from anything else we’ve seen, by the looks of it. I have no idea about the storyline, I’m not privy to that kind of information, unfortunately. But I’m looking very forward to seeing the movie. Hanging out with them at Comic-Con was- I swear they were all in character at Comic-Con, the entire time! There was so much energy in the room when they walked in! I was stuck in an elevator with them at one point, one of those massive Comic-Con elevators, and it was definitely one of those things when I’m going ‘Holy shit, these guys are out control, anything could happen!’ But it was lovely to see that kind of thing, they clearly enjoyed their roles enormously, and brought a lot of character and personality to them. […] And, yeah, I’m looking forward to seeing that movie, and as far as the universe expanding, it’s going to be very interesting to see how it all ties in. They have some kind of master plan, which, again, I’m not privy to, and hopefully I’ll have an inkling of what’s happening once Justice League starts to happen, and the various other projects and how they’ll align with a team like Suicide Squad.

Now that Zack Snyder is tied up for the foreseeable future with the Justice League movies, who would you choose to direct the next standalone Superman movie?
Its something that I’ve been thinking about, and I can’t name any name rights now. […] There’s lots and lots and lots of options out there. Wouldn’t mind the idea of Ben Affleck, actually. He’s a very good director, and I think it would be very interesting to see him at the helm of a Superman story, because there’s no real vested interest there, but that could tie in wonderfully to his character, and it could also lead to a cameo or something cool. There are so many names out there which could be good, and I don’t want to steal any Marvel directors names, because they’re probably tucked away by Marvel and held under lock and key. Who do you think?

After Fury Road, we’d give it to George Miller.
Okay, interesting. Very interesting. What kind of twist do you think he’d add to Superman?

He’d probably take it out of Snyder has set it up and set it off in his own Miller-y world, take it away from Justice League and just focus on Superman.
Okay, well, I’m very keen to do that because I think the opportunity to tell – well, we haven’t really told a Superman story yet. We’ve told a ‘This bloke called Clark Kent who is an alien’ story, who suddenly realised who he is, and was called Superman once in the movie, and now we’ve moved on to the world in which Superman exists and him having to co-exist with these other characters. But there’s so much to the character of Superman which I really don’t want it to be missed. It can really be delved into and there’s a lot of interesting things to be explored with filmmakers who are willing to do the scary thing of getting really complex in a superhero movie without losing the fun simplicity of superhero movies. And there’s so much in the way of source material there, it’s just about finding the opportunity.

Do you have one particular Superman storyline that you’d like to see realised?
There’s one really good story arc that I’ve enjoyed, where Superman fought Brainiac and found the city of Candor on his ship, and then resized Candor to it’s natural size, or at least brought everyone out – all of the Kryptonians from it, and all the Kryptonians had to co-exist with humanity, and I believe that had created a planet or put them on the Moon or something, and so these two worlds were living right next to each other, and obviously all of the political ramifications ensued. Not only is the battle with Brainiac an interesting one, but the fallout from that, and Superman ultimately doing a good thing – which is one of the great things about Superman, he always trying to do the right thing – but doing the right thing doesn’t necessarily always garner great results, as was the situation when he brought Candor back to life. Because then you’ve got a whole bunch of superpowered Kryptonians living right next to humans, and imagine how that would make us feel. I mean, one of them is bad enough, apparently…

Watch The Trailer below

BATMAN V SUPERMAN : DAWN OF JUSTICE is at cinemas from March 25th