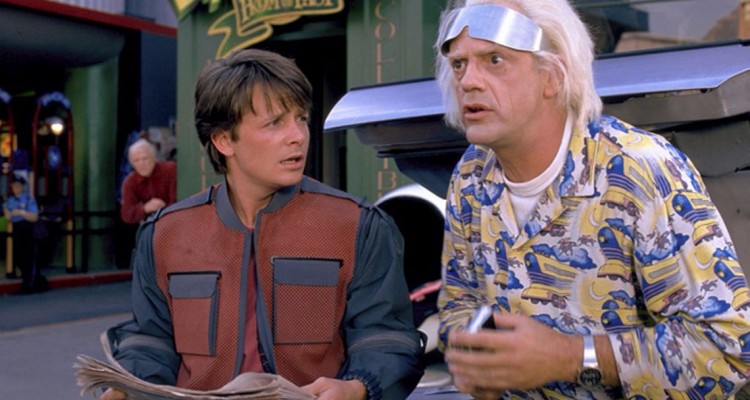 Happy Back to the Future II Day!

Well folks, it is finally here; the future day that Doc Brown (Christopher Lloyd) and Marty McFly (Michael J. Fox) travel to from 1985 in ‘Back to the Future II’… October 21st 2015!

Although we didn’t wake up this morning with flying cars and mirrored wrap around sunglasses, the day marks a special occasion for fans of the ‘Back to the Future’ franchise; one that we who saw ‘Back to the Future II’ in cinemas in 1989 have long waited for, and ignored the internet hoaxes of… Remember that one in 2010 that loads of people fell for? Not us!

To celebrate ‘Back to the Future II’ Day, Movies.ie have taken a look back over the tech and trends that the movie predicted, to find out which ones came true, and the ones we may have to wait another 30 years for.

Hoverboards
Perhaps the futuristic gadget that we were most looking forward to, the Hoverboard (Produced in ‘Back to the Future II’ by Mattel), has not been made readily available. There have been many attempts and hoaxes though, with Lexus trying out a version that relied on magnets and a metal rail buried in the ground, and skateboarder Tony Hawk first pranking the world with the help of Christopher Lloyd and the fake HUVr board in a Funny or Die video, before trying out the real (but less impressive) Hendo Board.

We suspect that we may be waiting a while before hoverboards become a reality. In the meantime, watch Tony Hawk and Christopher Lloyd’s hoverboard prank below…

Flying Cars
There have been attempts to make flying cars over the years – take a bow Boston-based company Terrafugia – but it seems we are going to remain firmly on the ground for the foreseeable future. With Tesla and Google (among others) testing a self driving car, we think this is as futuristic as we are going to get for the time being. It seems that where we are going, we do need roads after all.
As for vehicles being powered with common household waste however, there have been strides made with some English cities turning waste food into fuel for public transport. This is not quite as exciting as the Mr Fusion device in ‘Back to the Future II’ that turned waste food into power, but it’s a step in the right environmental and retro futuristic nostalgic direction.

Futuristic Clothing
‘Back to the Future II’ – henceforth referred to as BTTF2 – showed Marty McFly sporting a jacket that not only talked, but blow dried Marty after he fell into a pond. This has not become a reality – although a self-drying jacket would certainly go down a treat for Irish winters – but we are seeing the evolution of wearable tech such as Apple Watches and of course Google Glass (RIP!), which was hinted at with Marty’s JVC smart glasses in BTTF2. Of course we have had belts with LED screens on them for a while like police officers Foley and Reese have on their hats in BTTF 2, and Nike have filed a patent for self-lacing shoes as seen in the movie. Thankfully, wearing two ties in the style of Future Marty, never really caught on.

Thumbprint Payment
In BBTF2 Biff Tannen (Thomas F. Wilson) pays for a 2015 taxi ride with a thumbprint. This is not something that we are using, probably because we don’t want taxi companies and banks to have our fingerprints on file. However, many of us do use fingerprint scanners on our phones, and pay for taxis through apps like Uber and Hailo, so we are pretty gosh darn close to this one, even if there is a step in the middle.

Droids
BTTF2 predicted the rise of the droid with a USA Today news droid, a dog walking droid and a petrol attendant droid all appearing in the film. All of these fitted in with the futuristic feel of the film – which we now know to be retro futurism, but that’s another story – but while we have drones available to the public and being used by media organisations, they have not yet replaced the journalist on the ground. Phew! As for the others, there is something to be said for still walking your own dog, and although the mechanical petrol pump assistant has been tested in the Netherlands, and something similar is being developed by Tesla, this is another job that remains in the hands of the humans.

The Internet
One thing that BTTF2 really missed out on was the advent of the internet. Although the technology already existed in 1989, it would be another 10 or so years before it was developed enough to become a household feature, and so was ignored in BTTF2. Instead, Future Marty is fired by fax – even though he holds a video conference call moments beforehand – payphones still line the streets of Hill Valley (no smartphones here!), and Doc uses a newspaper to warn Marty of future events.

3D Movies
Although the prediction that writers Robert Zemeckis and Bob Gale made of a 3D version of a 19th ‘Jaws’ movie have not come true, it is fair to say they nailed the notion that 3D movies would once again be huge in the future. Of course, Robert Zemeckis – director of BTTF2 – is one of the directors to have adopted thi technology, with his latest film ‘The Walk’ being released in 3D and IMAX just a few weeks ago.
The lack of double digit amounts of sequels to ‘Jaws’ did not stop Universal from having some fun this ‘Back to the Future II’ Day though; watch the trailer for ‘Jaws 19’ below…

So it seems that BTTF2 had an accurate view of the future in some ways, but missed the mark in others. Still, that doesn’t change the fact that the film is still a clever, funny and smart time travel movie, so whatever your plans are this ‘Back to the Future II’ Day, we at Movies.ie wish you a very happy one indeed! Here’s to the future!