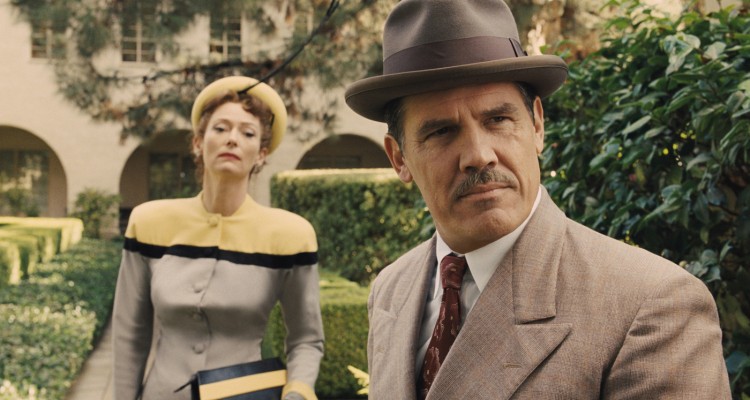 HAIL, CAESAR! (UK | USA/12A/106mins)
Directed by Ethan and Joel Coen. Starring Josh Brolin, George Clooney, Tilda Swinton, Scarlett Johansson, Channing Tatum
THE PLOT: In 1950s Hollywood, Eddie Mannix (Josh Brolin) works as a ‘Fixer’ for Capitol Studios. It’s Mannix’s job to make sure the studio retains its reputation, but between negotiating a portrayal of Jesus in the upcoming ‘Hail Caesar’ with religious heads, making a gentrified star of Western star Hobie Doyle (Alden Ehrenreich) and covering up the pregnancy of DeeAnna Moran (Scarlett Johansson), Mannix is considering a job change. The sudden abduction of Baird Whitlock (George Clooney) – star of “Hail Ceasar” – makes everything more complicated, especially with reporters Thora and Thessaly Thacker (Tilda Swinton) on the hunt for their next big stories.
THE VERDICT: The Coen Brothers turn their eye back to the underbelly of Hollywood – after 1991’s ‘Barton Fink’ – but this time, in trying to tell the story of a man holding a Hollywood studio together, the filmmakers seem to get lost in loving homage to the Golden Age of Hollywood, and forget to tell an actual story.
Josh Brolin does his best with the character of Eddie Mannix, and while he has some hilarious lines, and is the presence that holds the film together, he actually does not have a lot to do, other than move from one scene to the next. George Clooney amps up the absurdity as the kidnapped Baird Whitlock, Scarlett Johansson has fun with a thick-accented, seemingly innocent starlet, Channing Tatum dances up a storm as Burt Gurney and Tilda Swinton plays fast talking, nosy twin reporters. The rest of the cast is littered with familiar names, including Jonah Hill, Frances McDormand, Alison Pill and Alden Ehrenreich. The trouble is that while each of the cast does their best with their roles, they are let down by a meandering and incoherent script.
Written, as per usual, but Joel and Ethan Coen, Hail, Caesar! seems to be more concerned with making sure the details are right in this Hollywood homage, than telling an actual story. Dance sequences and synchronised swimming showstoppers abound – the latter lovingly created in the style of Busby Berkeley – but these literally stop the story from moving forward. With Mannix trying to hold so many plates in the air, and the audience learning virtually nothing about this central character – the entire affair descends into a bitty, beautiful mess.
As directors, the Coens have once again coaxed wonderful performances from their cast – although the casting of Tilda Swinton as twins feels a little stunty; perhaps trying to outdo Wes Anderson for casting her as an elderly lady in ‘The Grand Budapest Hotel’!? – and each gives their best to the role. The trouble is that in trying to pay homage to days gone by, and so many real life people – such as Hedda Hopper, Gene Kelly, EJ Mannix and Esther Williams – that the film needed a tighter edit to make it coherent.
In all, ‘Hail, Caesar!’ looks wonderful, sounds great and has a fantastic cast, but they are let down by a storyline that is muddled, messy and incoherent.
RATING: 2.5/5
Review by Brogen Hayes