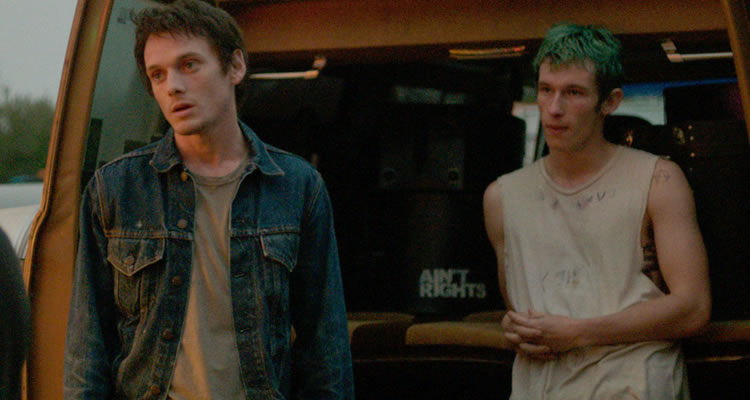 Directed by Jeremy Saulnier, whose previous film ‘Blue Ruin’ was a critical hit & cult classic, ‘Green Room’ follows a young punk band – The Ain’t Rights – as the aftermath of their gig in an Oregon Neo-Nazi bar goes badly wrong when the stumble across a murder. Movies Plus caught up with ‘Star Trek’ actor Anton Yelchin to talk about the movie.

Had you seen ‘Blue Ruin’ when you were cast in ‘Green Room’?
I saw it after I had got this script. I like that film a lot. It has this sort of pervasive melancholy. Great noirs sometimes have this incredible melancholy. I like the way that ‘Blue Ruin’ is both melancholy and completely absurd; all of the reasons, all the genre devices that, in another film, would have to be justified are simply material. I found that very moving.

The way that people react to violence in ‘Green Room’ and ‘Blue Ruin’ feels very true to life…
Yes. Especially in ‘Green Room’. I think genre films, the nature of the modernist genre film is that some things have to be justified, like the hero has to be heroic… In Jeremy’s films that’s just not the case. People try to think their way out of things, and they can use their ingenuity to a certain extent, but they just fail. They are just humans. The unknown, the absurd overwhelms us, there is nothing we can do really. I find that moving in Jeremy’s films.

Your screams in the film are bloodcurdling. How much effort did that take?
That was pretty rough… The whole movie was pretty rough, I feel like we are freaking out for most of the movie. There was this one great couple of hours where Joe [Cole] just farted 36 times. The man can fart on command like no-one hat I have ever met. It was just cracking me up, it was the most insane thing. I think cos we had spent so much time in a room, watching each other die, that to see Joe fart was like the best thing ever. It was rough, that stuff. It was exhausting. It was physically draining, but I don’t know how you would do it otherwise, I don’t know how you would go ‘Oh it’s no big deal…’ Maybe some people can. I watched Imogen [Poots], Joe [Cole] and Alia [Shawkat] and it was draining for everyone.

Did you take inspiration from anywhere else for the film?
I watched a lot of punk films; ‘Suburbia’, ‘Decline of Western Civilisation’… There is a road movie where punks go on a bus, it’s a documentary and everything goes to shit. I watched ‘The Deer Hunter’ actually, that was my reference for seeing the horror of your best friends slaughtered and trying to figure out how to get out of that.

GREEN ROOM is in Irish cinemas May 13th