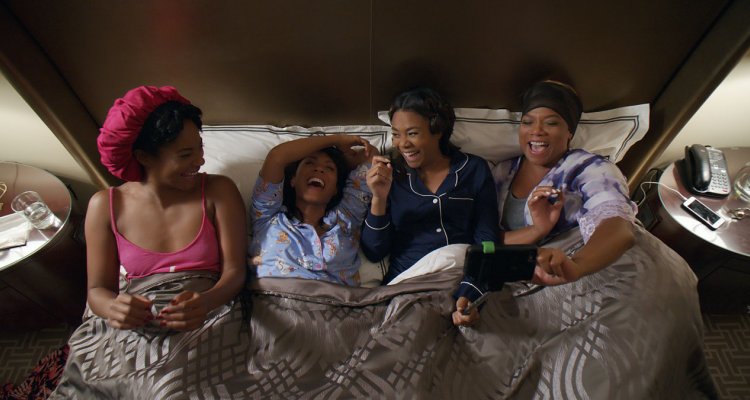 GIRLS TRIP – Movie Review (USA/16/122mins)
Directed by Malcolm D. Lee. Starring Queen Latifah, Regina Hall, Jada Pinkett Smith, Tiffany Haddish, Mike Colter.
THE PLOT: In college, Ryan (Regina Hall), Sasha (Queen Latifah), Lisa (Jada Pinkett Smith) and Dina (Tiffany Haddish) were best friends, calling themselves the Flossy Posse. Years later, the friends have drifted apart, but when successful author Ryan is to be keynote speaker at the Essence Festival in New Orleans, she invites her friends, in the hopes of rekindling their friendship. In between the drinking, dancing and brawling, the four friends uncover some uncomfortable home truths that put their tentative friendship in jeopardy again.
THE VERDICT: Fresh from glowing reviews in the US, ‘Girls Trip’ hits Ireland this week, but although there are some giggles to be had throughout the film, which’s tarts well, the charm quickly rubs off the film, leaving the 2 hour running time feeling long and drawn out.
The cast is made up of Regina Hall, Jada Pinkett Smith, Queen Latifah and Tiffany Haddish, and although the four characters start off as distinct from one another, albeit one dimensional, it is not long before the women begin to blend together in a screeching, over the top mess. The rest of the cast features Larenz Tate, Kate Walsh and Luke Cage’s Mike Colter.
The screenplay, written by Kenya Barris and Tracy Oliver feels as though it was inspired by ‘The Hangover’ and ‘Bridesmaids’; sending a group of women into debauchery and silliness, and making them behave incredibly badly for laughs. At the start of the film the four women feel distinct, with their own personality traits and quirks, but as time goes on, they all become similar to one another, screeching their way through the film and playing up the stereotypes that Ryan so carefully calls Kate Walsh’s character out for. The jokes get increasingly more disgusting and bizarre as the women try to one up one another, culminating in some uncomfortably placed grapefruit, and a full bladder in a zip wire. Dina gets all the best lines in the film, and easily steals the show with her fantastic comic timing, but she, as with all the other characters, quickly becomes tiresome as they are never given a chance to develop.
Director Malcolm D. Lee never manages to pace the film properly, with plot points and antagonists seemingly coming out of nowhere. The New Orleanian shenanigans get out of hand rather quickly, with celebrity cameos from Sean Combs, Mariah Carey and Ne-Yo just seeming to up the ante as the four main characters attempt to recreate their college days even though they all know they are too old for such nonsense. The laughs are sporadic throughout the film, and there are far more cringeworthy moments than laugh out loud ones.
In all, ‘Girls Trip’ is a comedy filled with jokes that never quite seem to land. The characters quickly lose any traits that make them distinct, leading to them blurring together in a shouting, screeching mess, and although the film tries to have a message, this too never quite hits home. Keep an eye out for Tiffany Haddish, she is an actress with great comedic timing, and someone to watch out for; the rest of ‘Girls Trip’ however, is awkward and ultimately forgettable.
RATING: 2/5
Review by Brogen Hayes