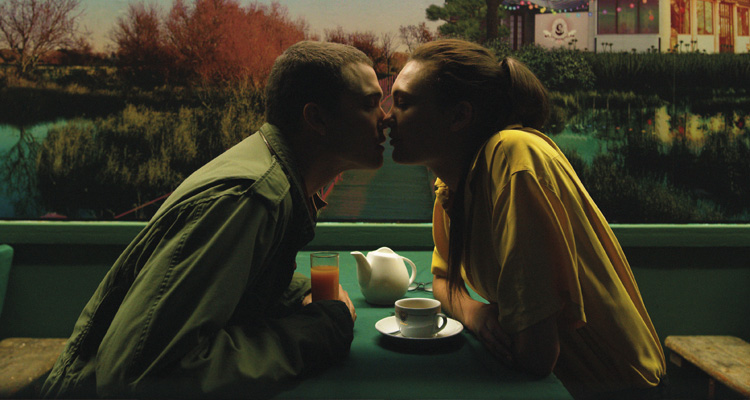 Gaspar Noé’s latest film ‘Love’ caused brawls at the midnight screening at the Cannes Film Festival earlier this year, as audiences fought to get a seat to see the first 3D pornographic film to be shown at the festival. Movies.ie were in attendance, and after the film we sat down with director Noé to find out just why he made a sexually explicit film, then coyly titled it ‘Love’.

This is the first pornographic film in 3D to be shown at the Cannes Film Festival; what inspired you most intellectually, the fact that the film is pornographic, that it’s screening in Cannes or that it’s 3D?
Gaspar Noé: I spent 20 hours a day shooting the film, and that fact that it’s in Cannes scared me, and I thought I’d better do six months’ work in one. We sold the project as a mellow pornographic film, I thought it would sell like hot cakes, and [Producer] Vincent Maraval said to me as soon as you say ‘pornographic’, people get scared. I read lots of pornographic books and watched pornographic films when I was young, but the film talks about being in love, from a sexual stance. To represent sex, it’s hard not to film the genitalia; we have seen Lars Von Trier’s film [‘Nymphomaniac’], there are some things which loom larger than life. We wanted to ensure the love scenes and the feeling of being in love was well represented.

What about 3D? Was it something that inspired you?
GN: There is something childish about 3D; it’s like a game. It’s hard to beat ‘Enter the Void’ in terms of filming, but I thought “What’s the next game I’ve never played that might be fun?” The idea of making a film, showing these very erotic scenes, that didn’t excite me overduly. I have done that showed these sorts of images, but I thought “What can I do that will amuse me? What new language can I find?” I took lots of photos with 3D cameras and standard cameras, and even a video camera, which you see in film. It cost €300, and this camera produces really troubling images when you see it in 3D, because it looks more real than in real life. I even saw pictures of my mother using this technique, and I find it difficult to look at them, they’re so moving.

You have said this is a very personal film for you, but the lead character can be quite unlikeable, are you beating yourself up on screen here?
GN: I would say it’s a mix of my friends, me, and what I think is a normal human person. Unlikeable, likeable… I don’t like movies in which one person plays a good guy and another plays a bad guy; it all depends on the situation you are standing in. The nicest person can turn into monsters when they go through stress, when they drink or take drugs so I didn’t want to flatter the character. Originally, in this very long script for me – it was seven pages long, ‘Irreversible’ is just three pages long – it seems that the characters were very likeable, and at the end, I think they are all just normal human beings. Maybe the part that I relate to most [in the lead character] is that he is obsessed with movie posters.

Can you talk about how you chose the music for the film?
GN: When I shot the movie I didn’t have any idea of which music I was going to out on the movie, but when I started editing I started trying all my favourite music ever. I put ‘Funkadelic’on the threesome love scene, and it works so well I cannot remove it, so we started negotiating the rights, there are some songs I dreamt of that we have; when they go to the swingers club the music is made by John Carpenter for ‘Assault on Precinct 13’ so that’s amazing. I thought I would not be allowed to have them but it’s funny, almost everything we tried to have, we got it for a nice price. There were so many scenes that were working partly, but the moment that you find the right music for the scene, it all makes sense. The movie is very emotional, but the emotions also come from the right choice of music.

How did you go about casting the film?
GN: I met Aomi [Muyock] at a party, Klara [Kristin] at a nightclub. When people say to me “You have to have a casting director or use an agency…” I don’t want to do that! I like to stop peoplein the street, or go into a bar and see a guy and say “Why don’t you do a character in one of my films?” I got on so well with Klara, I thought she would be great for the film. I wrote down her number, and the next day when I called she didn’t remember who I was! She probably gets so many numbers! She never thought she would be an actress one day, neither did Aomi. I don’t know whether they had a lot of fun, but they were courageous enough to say yes.

‘Love’ is released in Irish cinemas on November 20th 2015