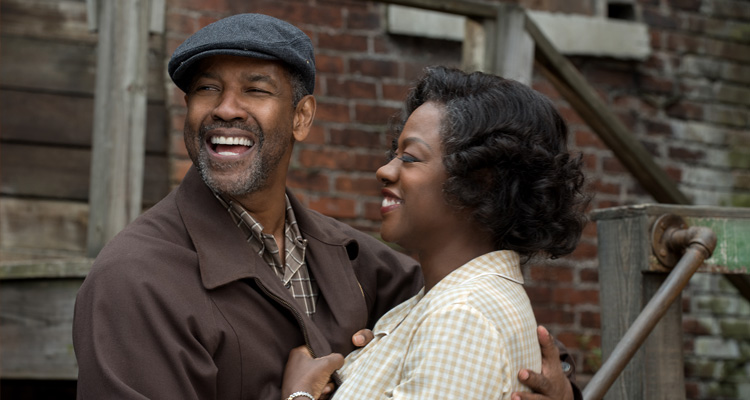 FENCES (USA/12A/139mins)
Directed by Denzel Washington. Starring Denzel Washington, Viola Davis, Stephen Henderson, Jovan Adepo, Russell Hornsby
THE PLOT: In 1950s Pittsburgh, as he struggles to find the time and motivation to build a fence in his back yard, Troy Maxson (Denzel Washington) talks over the events of his life with his friend Jim Bono (Stephen Henderson) and wife Rose (Viola Davis), while holding his family together and trying to get a promotion in his job as a garbage man. When a secret must be told, however, Troy soon finds his carefully constructed life coming down around his ears.
THE VERDICT: Based on August Wilson’s play and directed by Denzel Washington – who played Troy Maxson over 100 times on stage – ‘Fences’ is a film that often feels like a play, but is populated with strong performances and laden with dialogue.
Denzel Washington is on fine form as Troy Maxson, and displays the characters strengths and weaknesses easily, and often within seconds of one another. Washington is not afraid to allow his character to be talkative, fanciful and ugly, and does well with the role. Viola Davis is the real stand out as Rose Maxson; often tolerant of her husband’s flights of fancy, it seems as though Rose is content with her life until secrets come to light. It is then that Davis shines; making Rose a strong, heartbroken and confident character, who the audience has no choice but to feel for. Stephen Henderson obviously has fun with the good natured Jim Bono and, as a stage veteran of August Wilson’s plays, brings the character to life with ease. The rest of the cast features Jovan Adepo, Russell Hornsby, Mykelti Williamson and Saniyya Sidney.
August Wilson adapted much of the screenplay from his stage play before his death in 2005, and as to be expected from a film based on a play, the stage roots of ‘Fences’ are evident; there is oceans of dialogue throughout the film, the settings take place in and around the Maxson home and there is much talk of characters that never appear on screen. Fences would have benefitted from being written with the vision of being a film, however, as there are times when it seems as though too little is happening, and even though the conversations in the first act of the film are wonderful and give insight into the characters, it drags down the pacing and tension of the film as a whole.
As director Denzel Washington keeps the rhythm of the first act flowing as best he can, although there are times when the dialogue threatens to overwhelm the story being told. The performances in the film are strong and utterly engrossing, and Washington has succeeded in making the right characters relatable, and the right ones hateful, although tougher decisions about pacing would have benefitted the film as a whole. Perhaps Washington himself was too close to the material to make these choices.
In all, ‘Fences’ is a film anchored by powerful performances, and tells a fairly routine if horrible family story with grace and dignity. Viola Davis shines as Rose Maxson, and ‘Fences’ is definitely a film to watch, but could have benefitted from stronger pacing and a shorter running time.
RATING: 4/5
Review by Brogen Hayes