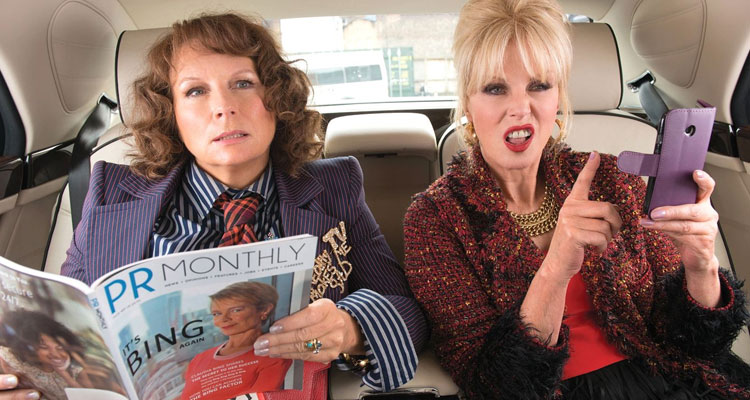 BACK IN THE DAY…

‘Absolutely Fabulous’ originally started out as a short sketch called “Modern Mother and Daughter” that appeared on season 3 of the ‘French & Saunders’ show. The sketch revolved around a middle-aged, single mother who acted like a teenager, and was reliant upon the emotional and financial support of her teenage daughter, who behaved like a middle-aged woman.

TV BEGINNINGS
In 1991 French & Saunders were preparing to film their 4th series when family commitments meant Dawn French had to drop out, leaving the BBC with studio time to fill. Saunders was asked for ideas to fill the slot but not having written anything on her own before left her terrified, this brought her back to the idea of the modern mother Adrianna, who she would rename Edina. “I had enjoyed writing and playing the character,” revealed Saunders, “I could speak her easily, which made the writing easier, indeed possible.”

OTHER MOVIES, SWEETIE!
This is unofficially the second ‘Ab Fab’ movie… back in 1996, a two-part television film entitled “The Last Shout” was meant to be the final adventure for Patsy and Eddy. But the world wanted more, two further series and three one-off specials aired. Seven years later, in 2011, Saunders once again bowed to public demand with two more specials followed by a special episode for the 2012 London Summer Olympics, which again was meant to be the last. But four years, and much lobbying later, Saunders has finally given the world what it has really been waiting for: ABSOLUTELY FABULOUS: THE MOVIE.

THE £10,000 BET
During a live broadcast of her Radio 2 Christmas show, Jennifer Saunders was offered a bet, to write an ‘Ab Fab’ movie script by her old friend and collaborator Dawn French. “She said that, if I hadn’t written the script by the same time the following year, I would have to pay her £10,000,” Saunders remembers. French & Saunders shook on it and the deal was done. “I was pretty confident that I would have written it by the summer,” says Saunders. But one year later, Saunders realised, in a blind panic, that she hadn’t fulfilled her side of the bet. “I had such a mental block about writing it,” she admits, “I just couldn’t quite see it yet.” Not wanting to suffer the indignity of losing the bet, not to mention the £10,000, Saunders quickly banged out the first 30 pages of a 90 page script. On the blank 60 pages, she simply wrote “Blah, blah, blah”, hoping that French might not notice.

CAST – OLD & NEW (Who are you calling old?)
The 5 J’s all return for the movie, including Jennifer Saunders, Joanna Lumley, Julia Sawalha, Jane Horrocks & June Whitfield. Joining the cast is ‘Game Of Thrones’ star Gwendoline Christie and Chris Colfer from ‘Glee’, who had his role especially created by Saunders. The two met when the ‘Glee’ world tour stopped off at London, being a big fan of ‘Ab Fab’ he asked his representatives to offer his hero, Jennifer Saunders, tickets to see the show. She came, he was awestruck, and the two became friends afterwards.

ELEGANZA EXTRAVAGANZA
As if the movie couldn’t get any more fabulous, producers put out a call for 80 drag queens for an early Monday morning shoot in London. The queens dressed in their full, fantastical regalia & jostled with the grey-faced commuters of London during 7am rush hour. “I have never seen anything so ‘Absolutely Fabulous’ in my life,” says Jon Plowman. And these were not just any old drag queens; these were the crème de la crème of the drag scene – fashion icon Jodie Harsh, “Britain’s Got Talent” finalist La Voix, as well as several queens from “RuPaul’s Drag Race”.

BOOK YOUR TICKETS, DARLING
‘Absolutely Fabulous – The Movie’ opens in Irish cinemas on July 1st, we’ll see you at the bar afterwards. *Hic*