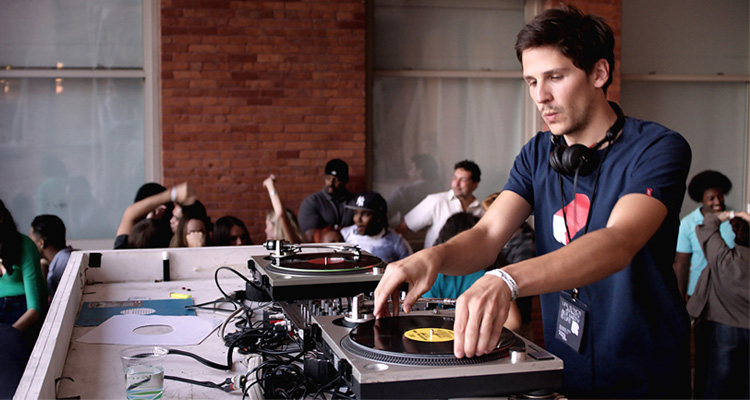 EDEN (France/IFI/131mins)
Directed byMia Hansen-Løve. Starring Félix de Givry, Pauline Etienne, Vincent Macaigne, Hugo Conzelmann, Zita Hanrot, Roman Kolinka, Hugo Bienvenu, Greta Gerwig and Brady Corbet.
THE PLOT: Mia Hansen-Løve’s film EDEN follows Parisian DJ Paul (Félix de Givry), as he spends 20 years trying to make a name for his DJ outfit Cheers, and goes through several relationships, battles with addiction and falls into debt.
THE VERDICT: EDEN is a strange sort of film, filled with decent garage and house music, but not much by way of a story, the film feels like a travelogue through Paul’s life and, as a character who doesn’t seem to learn anything until it is far too late in his life (and in the film), this leads to a musically grand but generally disappointing film.
The cast is made up of Félix de Givry, Pauline Etienne, Vincent Macaigne, Hugo Conzelmann, Zita Hanrot, Roman Kolinka and Hugo Bienvenu with cameo appearances from Greta Gerwig and Brady Corbet. As the film follows Paul – who does not go on much of an emotional journey – the rest of the characters flit in and out of the action, with little chance to develop the people they play into anything other than background players.
Mia Hansen-Løve and Sven Hansen-Løve’s story follows a man who tries to make it as big as his contemporaries Daft Punk – whose music is liberally used throughout the film – but instead descends into a life of drugs and debt. The script is thin, with many club scenes used to fill in the gaps and bridge the time between 1993 and 2013. This leaves the film feeling rather pointless, although there is an argument for the film being so thin since Paul has little meaning in his life. It may not be an accurate or particularly satisfying argument, however, as there seems little point in flashing the years on the screen and dragging the audience through yet another club scene.
As director, Mia Hansen-Løve keeps the pacing of the film at a steady crawl, but never seems compelled to make the characters anything other than superficial. Even as Paul periodically returns to his worried mother, he never seems to listen to anyone but himself. The look of the film is strong, however, and the music enjoyable, so this goes some way to making EDEN engaging, but with a running time of 131 minutes, capturing the feel of the club scene is one thing, but without a strong narrative the film feels drawn out and laboured.
In all, EDEN has a wonderful soundtrack, some strong stylistic choices and some fun club scenes, but the lack of a story and rounded characters means the film falls from being an exploration of struggle and failure into a journey through the life of a self absorbed DJ who seems to learn little through his life.
RATING: 2/5
Review by Brogen Hayes