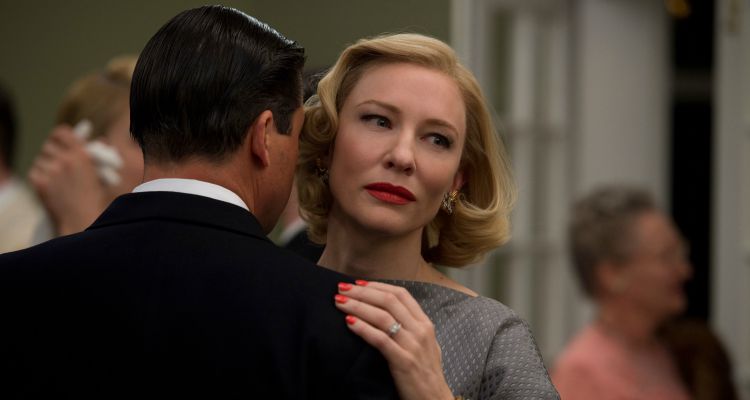 This week sees Todd Haynes’ highly anticipated ‘Carol’ finally released in Irish cinemas. Based on the Patricia Highsmith novel ‘The Price of Salt’, the film stars Rooney Mara as a young woman drawn into a gentle but emotionally tumultuous love affair with the beautiful and enchanting Carol in America of the 1950s. The film screened at the Cannes Film Festival earlier this year, and we caught up with Cate Blanchett on the French Riviera to find out more about this beautifully shot love story, and her feelings on opportunities for women in the film industry.

This is a film of looks and touches and silences, you have both been in the big films such as ‘The Lord of the Rings’ what is the difference between those films, and a small, intimate one like this?
Cate Blanchett: It’s a really complicated neuro-linguistic process, to make someone else’s lines your own, so I am always very happy not to talk on film. I think the challenge of playing a character that’s derived from a Patricia Highsmith novel is they’re so mysterious and ambiguous. What was wonderful about what Phyllis did with making this into a film is Carol is very much, almost a construct of Therese’s imagination; it’s all seen through the prism of Therese’s interior turmoil and Phyllis has really invented a whole world for Carol, and that was a gift. I had the elusive atmosphere of the novel and then I had the most beautifully chosen, almost haikus that Phyllis had chosen for Carol, so it was a gift.

I read that you had read 1950s erotic novels to prepare for the part. Can you talk about this experience?
CB: Part of the joy of acting is the research and the unique thing about this very personal, intimate novel that Patricia Highsmith wrote under a pseudonym was that it was the first lesbian story that had a happy ending and so I read many many that did not; that were outsider novels. I think it was very important to remember, living in the day and age we are in now, is that this was not the case then. This was not a world in which Carol herself existed; I don’t think she was a card carrying member of any sexual persuasion, and that its also important to remember that those labels, those environments, those groups, the comfort of those communities did not exist for many many people at that period, so the resultant isolation was very important for me to gather.

What was it like to film a love scene in this film? Have your feelings toward nudity changed in any way?
CB: Certainly since giving birth; a lot of strangers see you naked in that experience. No more so than if it was a love scene with a man. I have such admiration and respect for Rooney [Mara], and it was quite hilarious actually, in a lot of ways. I think it’s always great when it’s not for titillating reasons; it was a really important scene in the structure of the film and the telling of the story and Todd [Haynes] was fantastic at really explaining how it was going to be shot, so it was a scene like any other scene. Yes, there was a bit of apprehension going in, but not because it was between two women in any way.

In an interview with Variety, you said you have had many relationships with women, and this was taken to mean you have had sexual relationships with women…
CB: From memory, the conversation ran “have you had relationships with women?” and I said “Yes, many times. If you mean have I sad sexual relationships with women the answer is no”, but that obviously didn’t make it to print [laughs]. In 2015, the point should be… Who cares!? Call me old fashioned, but I thought one’s job as an actor was not to present one’s boring small microscopic universe, but to raise and expand your sense of the world and make a psychological and empathetic connection to another character’s experience, so you can present something other than your own world to an audience. My own life is of no interest to anyone else… Maybe it is, I don’t know, but I’m certainly not interested in putting my own thoughts and opinions up there. Why I wanted to be an actor and why I love being an actor is what you referred to before; it’s the research. It’s finding out other peoples’ experience and making that beautiful and tangible to an audience, in the hope that it will communicate something.

The film concerns a love that was in the 1950s when the film is set, was criminal. How do you feel times have changed since then?
CB: There are 70 countries around the world where homosexuality is still illegal, so it still seems to be an issue. I think the interesting thing about this, and playing a character like Carol is her sexuality is a private affair, and I think what often happens these days is if you are homosexual, you have to talk about it constantly. It has to be the only thing; you have to put it before your work, before all the other aspects of your personality. There are still so many countries around the world where it’s illegal; we are living in deeply conservative times, and if we think otherwise we are very foolish.

Have things improved in terms of roles for women in the film industry, both in front of and behind the camera?
CB: Well I think it needs to be very much front and centre of the conversation. There was an article in the International Times saying it was the year of la femme [the woman], and you hope it’s not ‘the year’! That it’s not some sort of fashionable moment. The more rich and diverse the stories are, the better it serves audiences, both male and female. The wonderful thing about this book, and I think Patricia Highsmith’s writing generally, is that you have both male and female perspectives melded and meshed. Yes, there are two women at the centre of it, but its not a niche experience. I think it’s important to keep talking about it, I think it fell off the agenda and I think we lost a lot of ground, but it’s wonderful to be working with female producers who are wanting to make great, intelligent, entertaining films. I think that’s what everyone wants to make.

‘Carol’ is released in Irish cinemas on November 27th 2015