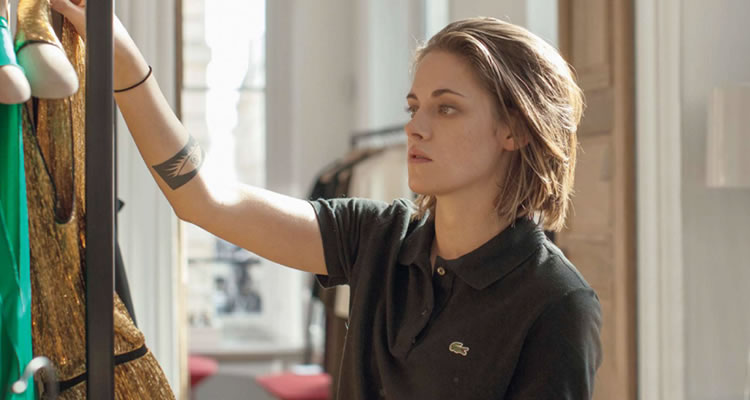 PERSONAL SHOPPER (France/TBC/105mins)
Directed by Olivier Assayas. Starring Kristen Stewart, Nora von Waldstätten, Anders Danielsen Lie, Lars Eidinger, Ty Olwin
THE PLOT: Living in Paris, Maureen (Kristen Stewart) is a personal shopper for the diva-ish actress Kyra (Nora von Waldstätten). Although she shops for a living by day, she has a stronger reason to remain in Paris; her twin brother Lewis died only months earlier and she is waiting for him to fulfil their pact; whomever dies first will contact the other from beyond the grave, being that they are both mediums. When Maureen returns to a house where she believes Lewis’ spirit to be, she unwittingly contacts a spirit unknown to her, and sets of a startling and violent chain of events.
THE VERDICT: Olivier Assayas returns to Cannes for the first time since his 2014 film ‘Clouds of Sils Maria’. ‘Personal Shopper’ is another film that attempts to examine life on an existential level, but where Cloud of Sils Maria soared, ‘Personal Shopper’ descends into silliness and mediocrity.
Kristen Stewart leads the cast as Maureen, and never quite manages to get a handle on the character. It is incredibly obvious that the personal details of this character belong to Stewart herself, so it is difficult to believe the journey that this character goes on. Since Stewart is the actress left to carry the film, this is a major problem. The rest of the cast features Nora von Waldstätten, Anders Danielsen Lie, Lars Eidinger and Ty Olwin, who have small supporting roles.
Olivier Assayas’ screenplay places Maureen at the heart of a ghost story that tries its best to be complicated and misdirect the audience, but the entire plot is obvious as soon as things get going. Maureen is egged on to do ridiculous things such as try on her boss’ clothes by someone texting her from an unknown number, which either may or may not be the ghost that her presence disturbed. The rest of the time, Maureen drifts around beautiful boutiques in Paris and London, trying to find clothes for Kyra to wear, or engaging in existential discussions via text or with complete strangers. There are times when it seems the film is going down a predictable but coherent route, but instead it shies away for something familiar that is left unresolved.
As director, Assayas never quite manages to get the great performances from his cast that he is looking for, meaning the characters never quite feel real. As well as this, a lot of the film is conveyed through text message, and looking at someone else’s texts is not only lazy storytelling, but dull. There are moments of action and curiosity throughout the film, but these quickly lead back to mundanity, as Assayas tries to make ‘Personal Shopper’ an existential ghostly thriller, but only succeeds in making something that is not one thing nor another.
In all ‘Personal Shopper’ is a mess. Kristen Stewart never quite makes the character believable and the entire cast is let down by a muddled screenplay that seems unsure about what it is trying to do. The costumes are great, but the ghost story never quite gets off the ground and the entire film asks more questions than it seems to have the answers for.
RATING: 1/5
Review by Brogen Hayes