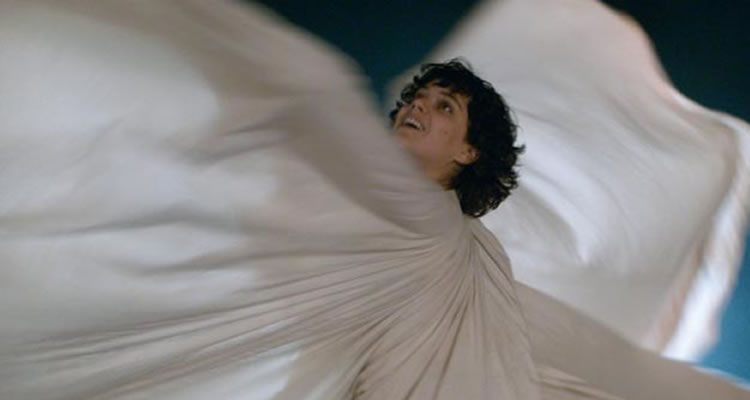 THE DANCER (France | Belgium/TBC/108mins)
Directed by Stéphanie Di Giusto. Starring Soko, Amanda Plummer, Lili Rose Depp, Gaspard Ulliel, Mélanie Thierry.
THE PLOT: After her father is killed, Marie-Louise Fuller (Soko) moves to Brooklyn to be with her mother and start her career as an actress. In her first role – a non speaking part – she begins dancing with her skirt, which is too big for her, and the idea to make this a proper performance is born. Fuller, now known as Loie, begins her dancing career performing on stage during theatre intermissions, before moving to France to continue her career.
THE VERDICT: ‘The Dancer’ is showing in the Un Certain Regard section of the Cannes Film Festival, and is the first film from director Stéphanie Di Giusto. The film is based on the novel by Giovanni Lisa “Loie Fuller: Dancer of the Belle Epoque”, and takes a look at the life and career of the American pioneer of modern dance.
In the lead role, Soko makes Loie passionate and determined, even though this career is one she finds herself wandering into. Soko manages the gamut of emotions well and endears the character to the audience, while making her tenacious and attractive to the people around her. Lil Rose Depp takes on the role of Isadora Duncan, and really does not have a lot to do, other than to look pretty and make Isadora seem like a diva; both of which she does well. Gaspard Ulliel plays Loie’s friend and admirer Louis, a man whose fortunes reverse with Loie’s throughout the film, and the rest of the cast features Denis Ménochet, Mélanie Thierry, Amanda Plummer and William Houston.
The screenplay, written by Stéphanie Di Giusto, Di Giusto, Thomas Bidegain and Sarah Thiebaud, tells the story of a woman who stumbles into a career she didn’t seek, who becomes tenacious and determined to be the best that she can be, even at a cost to her own health. The film is based on the novel by Lista, as well as on the true story of Fuller’s life, but seems to have taken artistic licence with the story for the sake of making an engaging film. The dialogue is strong, and Fuller comes off well, but as soon as she gains the recognition she so badly seeks, the film becomes choppy and jumps through entire sections of her life, while dragging its heels on others.
Director Stéphanie Di Giusto makes her feature length debut with ‘The Dancer’, which is wonderfully shot, making the landscapes and sets seem rich and beautiful, and fitting to the time period in the use of colour. The performances are patchy however; Soko manages to carry the film, but the rest of the cast are not as rounded or developed as the lead character. The pacing is strong at the start, but struggles in the third act, with the ending feeling more like a whimper than a bang.
In all, ‘The Dancer’ looks beautiful and Soko does well in the lead role. The rest of the cast suffer slightly, however and the story struggles in the third act. That said, it is a story worthy of being told, since Loie Fuller’s friend and contemporary Isadora Duncan often overshadows her in the annals of history.
RATING: 3/5
Review by Brogen Hayes