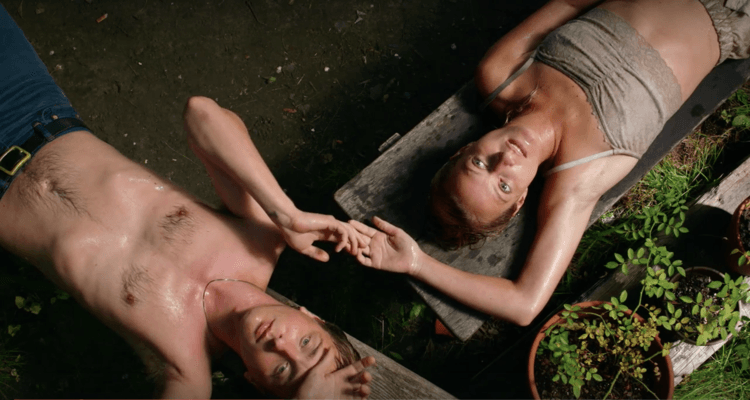 BUTTERCUP BILL (UK/USA/IFI/96mins)
Directed by Remy Bennett, Emilie Richard-Froozan. Starring Remy Bennett, Evan Louison, Pauly Lingerfelt, Mallory June, Monroe Robertson, Becca Gerroll, James Concannon.
THE PLOT: Louisiana, and having formed a special bond early on, especially when their childhood friend, Flora (Katie Belle), committed suicide, Pernilla (Bennett) and Patrick (Louison) are instantly drawn to one another when they meet again years later. Quickly moving in together, and despite the near-mute Patrick’s newfound devotion to God, the two create a strange and strained sexual relationship, often inviting a third party into their kinky funtimes. Just why slowly becomes apparent…
THE VERDICT: Co-written and co-directed (with Emilie Richard-Froozan) by leading lady Remy Bennett (granddaughter of the legendary Tony, fact fans), BUTTERCUP BILL refers to a children’s game that takes on a sinister twist in the closing scenes here. Before the beast of the southern wild reveals himself though, there’s a lot of beautifully-staged shots and not-so-beautifully staged soul mining.
On the plus side, this is a tale told largely from the woman’s perspective, and never moreso than during the sex scenes. So, you know, kudos for that.
RATING: 2/5
Review by Paul Byrne