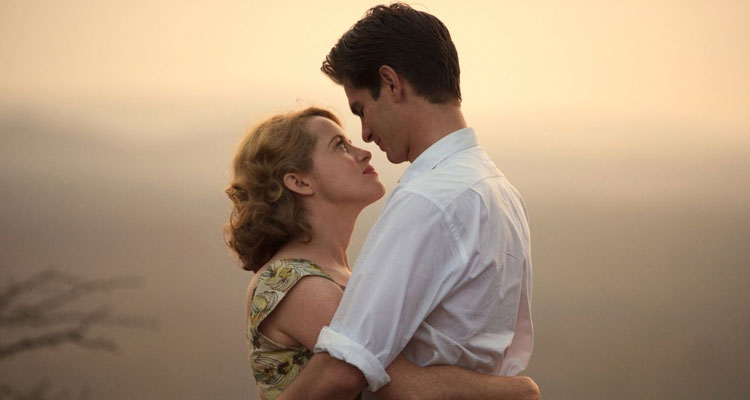 BREATHE (UK/12A/117 mins)
Directed by Andy Serkis. Starring Andrew Garfield, Claire Foy, Tom Hollander, Hugh Bonneville, Diana Rigg, Dean-Charles Chapman.
THE PLOT: Former soldier Robin Cavendish (Andrew Garfield) meets Diana (Claire Foy) at a cricket match in 1958 and it seems like a match made in heaven. They marry and he soon whisks her away to Africa. While there, tragedy strikes when Robin is struck down with polio. His nervous system and spine shuts down, paralysing him from the neck down. Even breathing naturally becomes impossible. The only thing keeping him alive is the respirator machine he’s attached to. Without it, he’d be dead within two minutes. Initially having dark thoughts, he soon finds another reason to live thanks to Diana and their impending child. However, Robin is not content to live out his life trapped in a hospital ward. With the help of friend Teddy (Hugh Bonneville), he becomes mobile thanks to a wheelchair that does the breathing for him…
THE VERDICT: Another version of The Jungle Book was intended to be performance capture wizard Andy Serkis’ directorial debut. That’s not out until next year. Instead he’s put his first foot forward into the directing arena with an altogether different, simpler film. ‘Breathe’ is a touching, self-assured debut based on the real lives of Robin and Diana Cavendish. As described by Serkis, it’s not a film about severe disability but is actually a love story that goes on despite the challenges ahead. It helps to have Robin’s son Jonathan as a film producer, as he lends an air of intimacy and authenticity to the storytelling.
William Nicholson’s deft screenplay packs in 36 years of these lives into just under 2 hours. The danger here is that it could end up being too compressed or having too wide a focus. By centring the story around the relationship between Robin and Diana, the story becomes more deeply involving with the years passing by as a mere fact. The gift of time is interesting to observe here. Robin was initially given six months to live, a terminally ill prisoner trapped first within his own body and then within his confined environment. But by challenging accepted beliefs about polio sufferers and their iron lungs (subtly demonstrated in one key sequence), he gave life back to himself and others. Time became a liberation, rather than a ticking bomb.
Serkis has certainly paid attention on film sets, working with the masters like Peter Jackson and Steven Spielberg. He has a firm grasp of his story and coaxes very natural, precise performances from his cast. Garfield continues to make interesting role choices, delivering a warm and at times humorous take on Robin. The real backbone here is Foy – the next Lisbeth Salander. She holds the film together effortlessly. Whether in performance capture or in the flesh, Serkis is adept at finding what makes a character tick. His directorial style avoids flashy camerawork and favours getting in close with his actors.
The phrases ‘inspiring’, ‘life-affirming’ and ‘uplifting’ are bandied about too often, to the point where they become clichés. ‘Breathe’ is a film that fully deserves them, without any clichés attached. It’s a personal story that takes on a larger perspective, simply and effectively told. Go see.
RATING: 4 / 5
Review by Gareth O’Connor