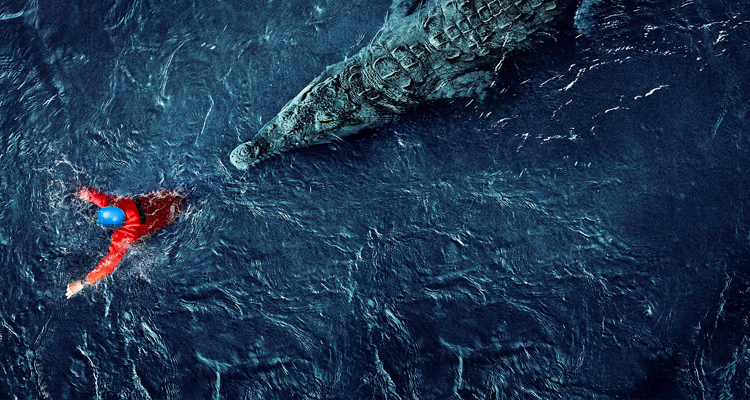 The Plot: Twentysomethings Jennifer (Jessica McNamee), Eric (Luke Mitchell), Yolanda (Amali Golden), Viktor (Benjamin Hoetjes) and Cash (Anthony J. Sharpe) venture out into a remote corner of Northern Australia for a spot of spelunking. As they descend into an apparently unexplored cave system, they find that the floodwaters have risen and hampered their progress. With no way back and a tricky way forward, they’ll have to find a way out. However, they have another problem to contend with. They’ve stumbled on the lair of a pack of crocodiles and it’s dinner time…

The Verdict: With cinemas slowly re-opening after being closed for over three months, the first new release out of the gate is a decidedly odd one for our strange days. Black Water: Abyss is a film about tight indoor spaces and a dark terror just waiting to pounce. For audiences who have been cooped up at home, it’s not exactly the kind of film that shouts ‘come back to the cinema’. Not that audiences need bother much. It has an air of opportunism about it, a distributor pouncing like a crocodile on a cinema-hungry audience when the film really should be going direct to VOD. If you dimly remember 2007’s Black Water, it was a moderately fun Australian spin on Jaws and had some bite. Though, this reviewer remembers it more for being the only person in the screen at the time. Black Water: Abyss is a surprise sequel in name only, appearing out of nowhere like a crocodile itself – it hasn’t even been released in Australia yet.

Director Andrew Traucki, one half of the original film’s directing team, returns here to try a different angle on the killer croc film by setting it mostly in a waterlogged cave system. It’s obvious early on that he intended to tap into the intense claustrophobic vibes of Neil Marshall’s masterpiece The Descent and last year’s surprisingly effective Hollywood creature feature Crawl. Sadly, Traucki is just a pretender when it comes to rivalling those survival horrors. Part of the problem stems from such thinly-written characters that one wonders if they might fall over at any point. So undernourished are they by the script, with the actors giving adequate if uninspiring performances in turn. It doesn’t help that there are several scenes that defy character logic. Why would a character look for a phone signal in an unexplored cave? It’s not like there’s a Starbucks down there. Why does another character wait to reveal a personal plot development at the right moment, but then do exactly the opposite? Why the need for unnecessary soap-opera melodrama in a cave?

It gets worse. Just when it looks like the film is about to neatly wrap up, it then goes back to square one in a laughable attempt to have a final pay-off. Speaking of which, there really isn’t enough of the killer crocs themselves. There’s an old film theory that the less you show of the monster, the more terrifying it is. The audience fills in the mental blanks. While that theory worked effectively in Alien, it’s a good hour before we get to see a proper view of the toothy predators here. The rest of the time is spent with the camera staring at murky waters waiting for something significant to happen. There’s a fatal lack of tension early on, with Traucki’s direction only coming to life in the last half hour. There are a few decent action scenes but not enough to keep the film afloat. When the title card for Black Water: Abyss proclaims it as a ‘A Thrills & Spills Production’, one would hope that it has enough of both to make it worthwhile. This croc has no bite though, rendering it both bloodless and toothless.