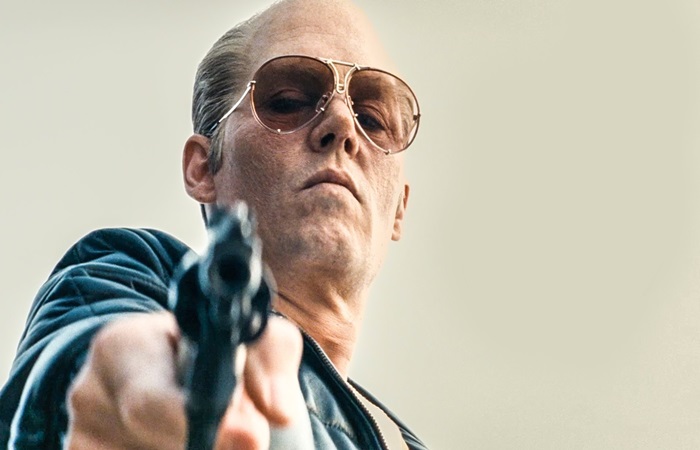 BLACK MASS (USA/UK/15A/122mins)
Directed by Scott Cooper. Starring Johnny Depp, Joel Edgerton, Benedict Cumberbatch, Dakota Johnson, Peter Sarsgaard, Jesse Plemons.
THE PLOT: We open on former members of Boston crime boss James ‘Whitey’ Bulger’s notorious South Boston-ruling Winter Hill Gang confessing all to their captors, their stories launching the flashbacks to the 1970s and 1980s – and a spectacular rise and fall. We open on Bulger’s Irish-American operation competing with their Italian-American counterparts, a murder lighting the spark just as the crime boss’ old childhood friend, John Connolly (Edgerton), approaches him with an FBI offer that’s hard to refuse. In return for information on how to bust the Italian-American mafia in South Boston, Whitey and his gang will get protection. And so it goes, and goes, until the inevitable greed and sense of entitlement on both sides of the law starts to put a strain on all those within a 50-mile radius. The fact that Bulger’s brother (Cumberbatch) is a state senator.
THE VERDICT: With his blockbuster days now firmly behind him – how many flops has it been now? – Johnny Depp wisely retreats to his old character actor roots with ‘Black Mass’. Looking far more like Hunter S. Thompson – especially the Garry Trudeau version – than Boston baddie Smiley Bolger, Depp nonetheless delivers here. And the Elvis effect works in his favour. The complexities of a man who was both a vicious thug and a Robin Hood suits our leading man’s current limbo state off-screen, Depp caught between the aftermath of over-exposure and bad blockbusters, and the uncertainty that he will ever be able to reclaim that hard-earned credibility the actor had built over twenty years. Before shaking hands with Jerry Bruckheimer.
The fact that Depp is playing a truly fascinating character here helps, Bolger being one of those American anti-heroes who, despite living a life of crime and brutal violence, ended up being a cool t-shirt.
Directed by Scott Cooper – who gave us the one trick pony that was ‘Crazy Heart’ – Black Mass hits all the expected notes, the American true-life gangster pic being pretty much a solid gold blueprint at this point. The fashion, the cars, the soundtrack, the grey-haired mum, the hurt hottie girlfriend, and so on. Nothing wrong with a good formula, of course, and everyone here plays to their strengths, especially Joel Edgerton as Whitey’s good-cop-goes-bad-cop partner-in-crime, John Connolly. The South Boston accents all suck though.
RATING: 3/5
Review by Paul Byrne