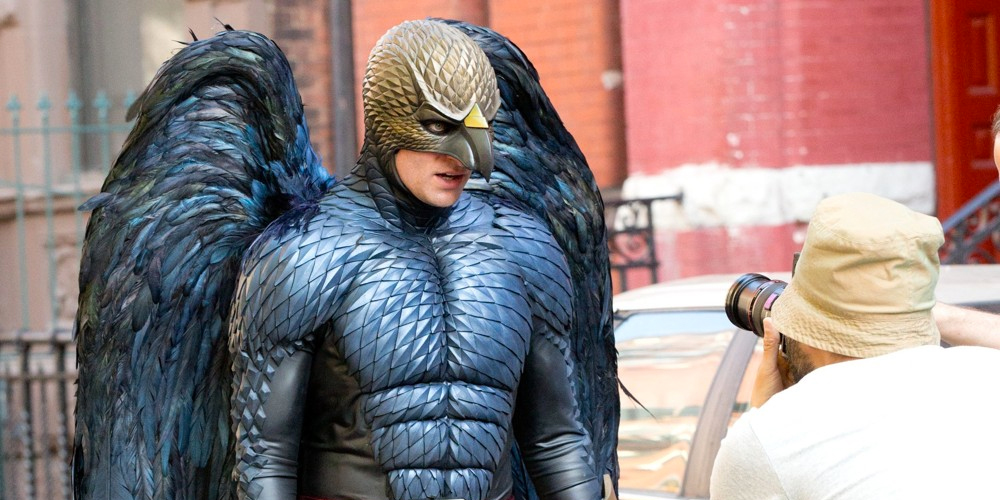 BIRDMAN (USA/15A/119mins)
Directed by Alejandro Gonzalez Inarritu. Starring Michael Keaton, Zach Galifianakis, Edward Norton, Emma Stone, Naomi Watts, Andrea Riseborough, Amy Ryan.
THE PLOT: Haunted by his most famous box-office role, Birdman, and the fact that his career is in the doldrums, a plainly distressed and distracted Riggan Thomson (Keaton) is hoping for a comeback by writing, directing and starring in a Raymond Carver production on Broadway. Quite clearly a man teetering on the edge of a freefall, Thomson regularly converses with his 1990s comic-book persona Birdman, and even experiences the occasional superpower moment. We first meet Thomson seemingly levitating in his dressing room. Moments later, as his co-lead male actor whines once too often, Thomson uses his telepathic powers to have a stage light drop on his head. Or did the light just fall? Thomson’s anxieties continue to mount though, even when the brilliant Mike Shiner (Norton) is drafted in as replacement. Shiner is a loose cannon, seemingly willing to do anything for his art, and he is soon pushing Thomson to do the same, both artistically and professionally. Shiner acts and behaves like a man with nothing to lose; Thomson is in constant fear of losing everything, not only all the money he’s invested in the production and his career, but also the waning respect of his disgruntled, rebellious daughter (Stone), his possibly-pregnant co-star (Riseborough) and his long-suffering ex-wife (Ryan).
THE VERDICT: A film that’s not quite as good as it thinks it is, BIRDMAN is nonetheless another fascinating slice of cinema navel-gazing, with Michael Keaton going full Meta in the title role, as the fallen box-office giant hoping that being a big deal on a small stage might just relaunch his career. Hey, it nearly worked for Kevin Spacey.
As much about celebrity versus creativity and credibility, the current cult of branding in Hollywood, and that old chestnut, the mid-life crisis, as it is about a bunch fo actors banging heads backstage, BIRDMAN is full of flights of fancy. Some soar, others play like a penguin dressed up as a phoenix, but even when BIRDMAN fails to fly, there are plenty of sweet moments and perfectly-formed put-downs to keep you chuckling.
Ultimately no more revealing about the actor’s life than Woody Allen’s sublime BULLETS OVER BROADWAY(and only half as funny), BIRDMAN has pockets of brilliance (most of them involving Edward Norton), but it never truly lives up to its Oscar-baiting pretentiousness.