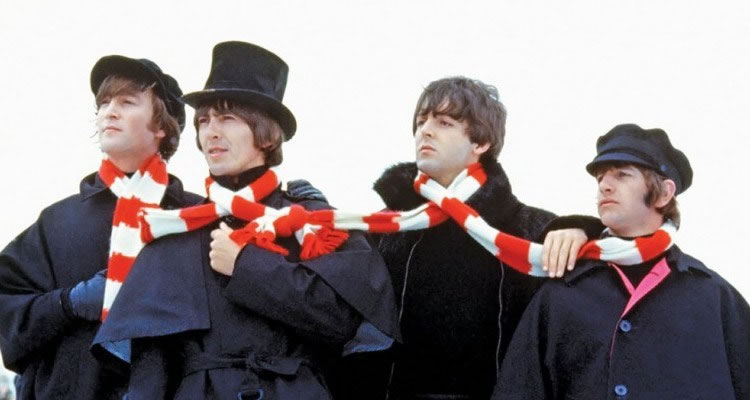 THE BEATLES: EIGHT DAYS A WEEK – THE TOURING YEARS

THE BEATLES: EIGHT DAYS A WEEK – THE TOURING YEARS (UK | USA/12A/137mins)
Directed by Ron Howard. Starrring Paul McCartney, Ringo Starr, John Lennon, George Harrison, Eddie Izzard
THE PLOT: In 1964, The Beatles stopped touring, after years of being on the road, and gruelling schedules. Filmmaker Ron Howard takes a look at the years leading up the decision for the band to stop playing live, and the madness that was Beatlemania.
THE VERDICT: The title for Ron Howard’s newest documentary on The Beatles seems pretty darn appropriate; at the height of the mania that surrounded them, the band were releasing a single every three months and were almost always on tour. Eight days in a week would have suited this schedule down to the ground, so they could play as many shows as possible. This could not go on indefinitely however, and the band quickly tired of the music coming second to the spectacle of The Beatles.
Ron Howard takes a look back over the years between the small gigs the band played at The Cavern Club in Liverpool, through to when Beatlemania started with “Please Please Me” in 1963, and the subsequent tours that were the first for the band since their regular trips to Ham burg in the early days. What is clear through archive footage and new interviews with Paul McCartney, Ringo Starr, Eddie Izzard, Elvis Costello, Whoopi Goldberg and others is the fun that the band had with this first brush with mega stardom, and their first trip to the US. The archive footage shows four cheeky, funny and united young men playing with their fans and the media, while shaking u the status quo with their very presence.
While it is always enjoyable to watch The Beatles at the height of their fame, it is not long before dissent and unhappiness begins to set in, a fact that Howard carefully shows, as well as the justifications for the bands unhappiness; they made all their money from touring due to their bad record deal, but they knew the audience could not hear their music over screaming girls, and music began to play second fiddle to the sight of The Beatles on stage. Howard shows this with great care, against the backdrop of the period in history, when the civil rights movement was on the rise, as was the era of the “teenager”, an era that allowed The Beatles to thrive.
The new interviews are revealing, and it is clear that Paul and Ringo have conflicting emotions when looking back over the touring years, while the archive footage shows the near hysteria that followed the band almost everywhere they went.
Ron Howard cleverly does not pay much attention to the personal lives of the band members at this point in their careers, instead focusing on the music and their experiences with fame. The music sounds great throughout the film, and reminds audiences of just how talented and smart The Beatles really were, making us want to dig out our favourite albums all over again.
In all, ‘The Beatles: Eight Days A Week – The Touring Years’ could serve as a cautionary tale for up and coming artists who desire fame and fortune. In focusing on just the years that the band tours, director Ron Howard reveals a new side of the band that often gets skimmed over in the rush to tell the complete story. ‘The Beatles: Eight Days A Week – The Touring Years’ is a delight for fans of The Beatles and perhaps a warning for those who desperately desire international renown.
RATING: 4/5
Review by Brogen Hayes

Review by Brogen Hayes
4
A delight