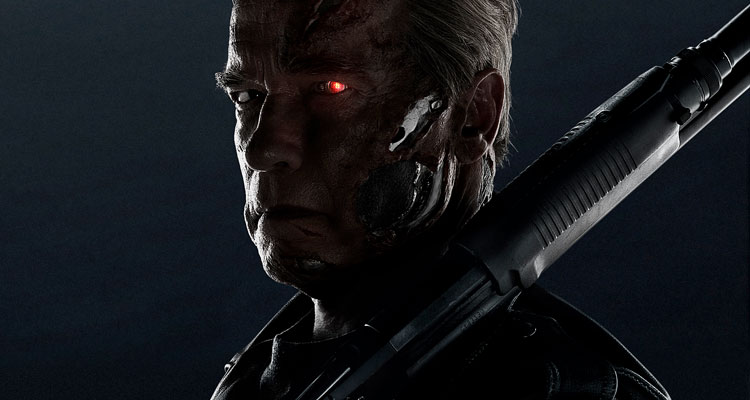 Arnie returns to the iconic role that made him famous this summer, his fourth time playing the Terminator see’s the past changed and a brand new chain of events unfold.

What got you excited about returning to the Terminator series?

I got excited as soon as I read the first draft of the script, which was way before anyone was yet hired. I was very happy about the fact that they paid a lot of attention to the story line, and the characters. To me, this was the most important factor in why I wanted to be a part of it.

Was it strange at all, coming back to this iconic role?

No, it’s like riding a bicycle, you fall right back into it. I remember when I read the script and the started practicing the lines. I started talking like a machine again. It was kind of like you slip into that character, and the only thing you have to be careful about is do you play the Terminator, or do you play the Protector, or do you play the Protector and therefore you’re also the Terminator because you protect? Like in this case I protect Sarah Connor, but anything that is coming close to her, or is threatening her I terminate. So I’m the Terminator in some ways, and I’m the Protector in another. So you have to be careful how you play that in each moment. This is why it’s important that you have really good communication with the director, that you, make him aware of it. Be very careful that you don’t go too strong, but then communicate the kind of fatherly protector, make sure we get that across.

Was the original ‘Terminator’ your last ‘small’ film?

Until recently, yes. But I’ve just done an independent movie, ‘Maggie’ which is about zombies, and there was like an eight million dollar movie, and ‘Terminator’ was a six and a half million dollar movie in those days. So it’s fun to sometimes do small movies where you do things in six weeks, and it’s all character-driven, and then a big movies like this one, where the visual effects, the stunts, etc. have to be coordinated, and choreographed, and story-boarded out, and all that. I enjoy both – as long as there’s a great story. And this movie had a great story, and people really paid a lot of attention to the characters and so on.

Did you revisit the previous Terminator films before you began working on this one?

Yeah, I did. I think for the other actors, they had a little more freedom to interpret their characters. They weren’t locked in to performances by previous actors, because the timelines and situations for their characters here are different. I felt more the pressure of, you know, locking in and being the Terminator because it is in a way the same character. I didn’t play a different Terminator or anything like that. So I did look at number one, number two, and number three, and looked at the performance and all this, and I think that’s what helped me then in the end to kind of lock into that character very quickly and to keep playing exactly the way I’ve played it in the past, except according to the circumstances if I was protecting, or terminating or whatever.

Why do you think your character is so popular with so many people?

What some people have said to me about why they enjoyed the Terminator character is because he is a machine. He looks like a human being but he’s a machine, and therefore he’s indestructible. And so people like that because everyone wants to be like that. And then they feel like there’s really no limit to what power he has. That he can destroy anything in front of him, eliminate anything in the way. But… at the same time you don’t have to be responsible for anything because you’re a machine. For instance, in the first movie I destroy an entire police station. Normally people would say that’s not a good example or very inspirational or something like that. But even when we had a special screening for the police force, the officers were cheering when I was wiping out the police station. Why? Because it was not a human being doing it, it was a machine. The way Jim Cameron wrote it, and the way he filmed it was the character, even though he was a villain in the first, became heroic. And so I think that that’s what people enjoy that he can be this kind of evil–but at the same time be a good person, or be a good machine.