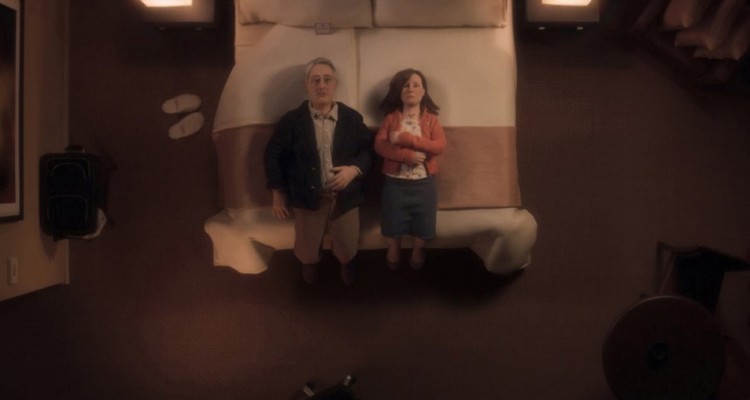 ANOMALISA (USA/15A/90mins)
Directed by Charlie Kaufman and Duke Johnson. Starring David Thewlis, Jennifer Jason Leigh, Tom Noonan.
THE PLOT: Michael Stone (David Thewlis) reutrns to Cincinatti to give a conference on customer service. While there, he dredges up old memories from the past, and thinks he finds kinship in Lisa (Jennifer Jason Leigh). The trouble is that Michael sees no differences between the people in his life, and it is not long before Lisa begins to blend into the background.
THE VERDICT: Funded through Kickstarter, ‘Anomalisa’ first began life as a 40 minute short film before being expanded into a feature length story. ‘Anomalisa’ is based on a play written by Charlie Kaufmann – under the pen name Francis Fregoli – and examines issues surrounding mental health, and the problems that we cause for ourselves.
‘Anomalisa’ is entirely stop motion animated, and this lends an air of unreality to the story, one without which the film would possibly not have worked as well. David Thewlis, Jennifer Jason Leigh and Tom Noonan – who voices every other character in the film but Michael and Lisa – are fantastic in bringing these characters to life, and making them feel rounded and whole. The voices lend depth to the emotion on screen, and Tom Noonan’s performance as “Everybody Else” is similar enough to underline the issues that Michael is facing, but different enough to make sure the audience doesn’t laugh at this device.
‘Anomalisa’ is the first film to be written by Charlie Kaufmann since 2008’s ‘Synecdoche, New York’. Kaufmann makes sure that the dialogue in the film feels natural and warm, while setting the film in the sterile and unsettling location of a hotel makes the story that little bit more surreal. The idea that Michael is suffering from mental health issues is brought to the screen through the puppets all having the same face and voice, but the audience is left to make their own assumptions about the character, and just how he found himself in this situation. There is no big realisation at the end of the film; Michael simply returns to the life that stifles him and makes him miserable, without actually dealing with any of the issues he is facing… As so many do.
Directors Duke Johnson and Charlie Kaufman allow the audience to forget that we are watching an animated film, by making the performances so believable, the setting so realistic and the mystery surrounding Michael utterly intriguing. The film appears to be set in the late 1990s or early 2000s, as mobile phones and the technology we so heavily rely on now is notably absent, which gives the film a feeling of familiar warmth, without feeling jaded or overdone.
The sets created for ‘Anomalisa’ are beautifully realised in painstaking detail, making the world of the film feel much bigger than the hotel, like there is an entire world outside the shot on screen, waiting to be explored.
In all, ‘Anomalisa’ is a stunningly beautiful film, realised in exquisite detail. The story is an examination of the disappointments in life, with a layer of paranoid delusion laid over the top. There is little in the film that answers the questions raised, but this is why it works as it does not preoccupy itself with exposition and explanation focusing instead on telling a truly engaging story. David Thewlis, Jennifer Jason Leigh and Tom Noonan bring the world to life with their voice work, and although the film does not try to tie itself up in a happy ending, there is no doubt that ‘Anomalisa’ is a special, beautiful and engaging anomaly.
RATING: 5/5
Review by Brogen Hayes