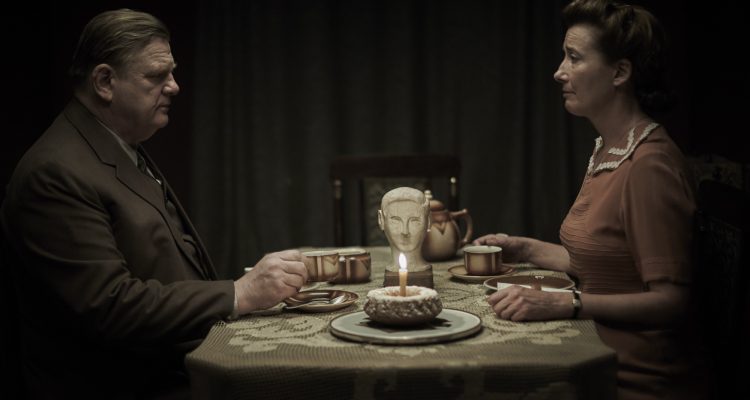 ALONE IN BERLIN (UK|France|Germany/12/103 mins)
Directed by Vincent Perez. Starring Brendan Gleeson, Emma Thompson, Daniel Bruhl, Mikael Persbrandt.
THE PLOT: Berlin, 1940. The city is in a jubilant mood, with the fall of France to Nazi power. However, mechanic Otto (Brendan Gleeson) and housewife Anna Quangel (Emma Thompson) are not celebrating. Their only son has been killed in battle. Blaming Hitler and his unstoppable war machine, Otto starts a quiet act of rebellion. Disguising his handwriting, he composes anti-Hitler statements on postcards. He discreetly leaves these postcards on stairways and other visible locations in buildings across the city, with some help from Anna. Soon, these seditious cards become more common and come to the attention of police detective Escherich (Daniel Bruhl). He’s coming under pressure from SS Officer Prall (Mikael Persbrandt) to deliver the traitors as soon as possible. The net closes in on Otto and Anna…
THE VERDICT: ‘Alone In Berlin’ doesn’t start with any disclaimers or an ‘inspired by true events’ card. That’s worth bearing in mind as events unfold in this decent, mid-level wartime thriller. It’s based on the Hans Fallada novel ‘Every Man Dies Alone / Alone In Berlin’, adapted here by director Vincent Perez, Achim von Borries and Bettine von Borries. Fallada’s book was inspired by an actual wartime case from Gestapo files, involving Otto and Elise Hampel. Details are sketchy about what actually happened to them, but their act of rebellion against Nazi tyranny has been recorded by the history books.
In a sense, that liberates Perez from trying to fill in the narrative blanks. Instead, he uses the book and the slightly different names to tell a low-key but quietly powerful story about two ordinary people who were concerned about what was happening to their country. The actions of the Hampels pre-date that of anti-Hitler White Rose movement. So, they were very much on their own. Perez builds up an atmosphere of suspicion early on, with the one Jewish character facing persecution. The story is very much focused on Otto and Anna though, giving an alternative, ground-level view of German people questioning the absolute power of Adolf Hitler in their own small way.
For the most part, it’s quite an absorbing story. Gleeson and Thompson do solid work here, in an often under-played manner. There are no big fireworks or Oscar-baiting theatrics here. Instead, they play the Quangels as straightforward as possible and maintain their characters’ dignity as the net closes in fast. Bruhl’s police detective is a touch on the modern side, like a character from a 1970s film. However, he brings both desperation and humanity to what could have been a one-note role. Much likes its lead characters, it could be said that this is a small film that is unlikely to have much impact. On the other hand, it has a simple message of holding onto your beliefs and rising up to state them, whatever the potential consequences. Worth seeking out.
RATING: 3.5 / 5
Review by Gareth O’Connor