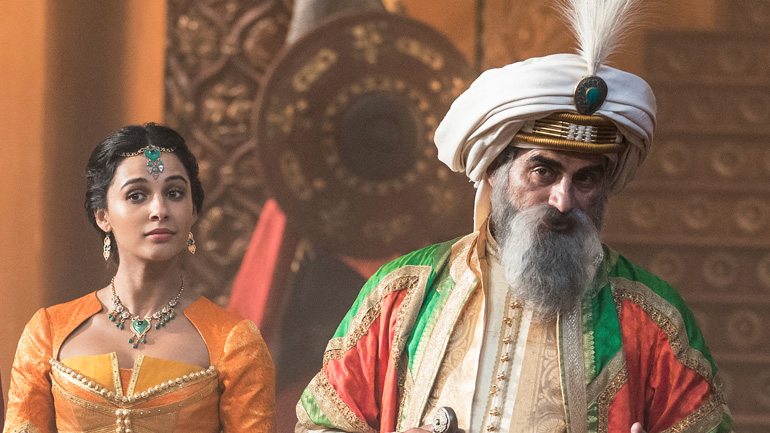 From humble beginnings as an Iranian refugee fleeing the Revolution to playing Sultan, an iconic Disney character in this month’s live action remake of ALADDIN, directed by Guy Ritchie and starring Will Smith, Naomi Scott and Mena Massoud; ‘Homeland’ actor Navid Negahban has truly defied the odds and made his dreams of working as an actor come true.

Did you re-watch the original Disney animation to prepare for your role as Sultan?

No, because after I read the script, I felt that re-watching the original will pollute my vision of the live action character. In the new ‘Aladdin’, the Sultan has more depth and is not a caricature of a father. But I will let you judge it for yourself.

To achieve the iconic look of Sultan you had to dress the part, was it difficult to shoot with the big bushy beard in the heat?

Our designers did an amazing job helping me to bring the Sultan to life. I was completely speechless when I got there. The transformation took us about an hour and half.  And yes! After a while my whole face was sore from wearing the beard day after day.

What was it like working with director Guy Ritchie?

Working with Guy was great. Amazing energy. Every time we did a run through, he would jump in and kind of play all the characters in his head and then he would disappear in the corner and let us play around to discover the moment. Then he would jump in and pick the moments he wanted to change. Max Keene our first AD was always the lifeline. They both created a safe environment for us to play and explore. I truly enjoyed working with them.

The film-makers were very authentic with their casting do you welcome this diversity being increasingly seen on Hollywood screens?

Yes! It is becoming more visible and that’s something that all the actors or artists are fighting for. “Don’t create limits in the unlimited world of imagination.”

Naomi Scott plays your daughter Princess Jasmine in the movie, did you have much time to bond and rehearse scenes?

It was wonderful. Naomi was the generous and lovable princess long before she became Princess Jasmin. We had moments to spend with each other. We shared stories and I had the opportunity to meet her father and some of her family members. Lovely people.

Do you get to sing on set?

Singing???!!!!! No way! My nick name is Singbad the Sailor!! The musical numbers were amazing!!! Our dancers and the choreographers were truly magical.  Even the days that I wasn’t working, I would try to stop by just to watch them working.

ALADDIN is at Irish cinemas from May 22nd