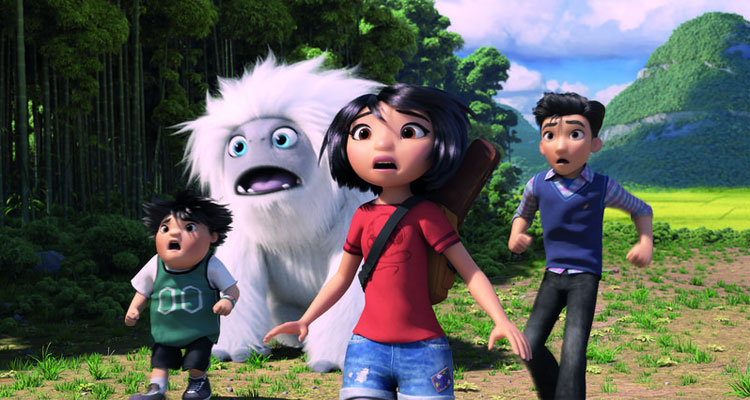 In short: Not abominable

The Plot: Believed to be a myth as an abominable snowman of the Himalayas, a yeti escapes from a secret underground Government base. He hides out in the urban jungle of Shanghai, where he runs into adventurous teenager Yi (Chloe Bennett). At first afraid, she discovers that the yeti is rather friendly. Dubbing him Everest because he stares longingly at a billboard of the famous mountain, she gets her friends Peng (Albert Tsai) and Jin (Tenzing Norgay Trainor) involved. She must take the Yeti back home where he belongs, so the group set off on a wild adventure across country. However, they are pursued by the dastardly Burnish (Eddie Izzard) and his assistant Dr. Zara (Sarah Paulson) who want their science experiment back…

The Verdict: With a title like Abominable, there’s a double-edged meaning to that. Thematically, it refers to the mythical yeti or Abominable Snowman of the Himalayas. It could also be a description for the film itself, an animated family adventure from Dreamworks Animation and the makers of the How To Train Your Dragon series. Far from it. Abominable is anything but abominable. It’s really rather sweet and hard to dislike. That’s partly down to the cutesy aspect of Everest himself, a furry beast with big eyes and an even bigger heart. Think E.T. crossed with Chewbacca and an eager dog, rather than the cautious, wizened old yeti of Hammer’s 1957 film The Abominable Snowman. The other reason to like Abominable is the  Chinese aspect, which introduces a rich and colourful visual palette unusual in a film of this kind.

Abominable is a Chinese-US co-production and while the setting is very much in China, there’s an American feel to the animation which extends beyond the voicework. The two cultures don’t quite gel together in the way one would hope for. While the Chinese characters have American and English accents (on this side of the world anyway), they’re also prone to using Americanisms like ‘dude!’ which draws attention to itself unnecessarily. While younger viewers might not notice as much, parents going along with them might find the unsophisticated culture clash a bit jarring. Why not be more authentic and cast Chinese actors speaking English? There are some yeti-sized lapses in logic too, like human characters breathing unaided at the cruising altitude of a 747, but that’s getting into nitpicky detail. The film is too good-natured to be mean-spirited about it. It’s an animated film, so some artistic licence is allowable.

Where the film scores the strongest is in its visuals, which are nothing short of breathtaking. Rendered in gorgeous, tactile animation by the CGI artists, Chinese forests, mountains and snowy landscapes come to life in eye-popping 2D. No gimmicky 3D required here. Co-directors Jill Culton and Todd Wilderman create some imaginative sequences like our band of adventurers and their new friend surfing a field of flowers or an amusing encounter in a forest of oversized blueberries (eat your blueberry heart out, Violet Beauregarde). Everest has some magical powers of his own, so that adds another dimension of visual flair to the story. While the attractive look of the film keeps your eyes glued to the screen, it’s also worth pointing out that the film’s themes of friendship, adventure and journeying into the unknown score well too in rounding out the overall positive impression of the film. While it’s not Pixar-level perfect, Dreamworks’ latest effort Abominable is a pleasant, cuddly and entertaining adventure for all the family. It might just have the legs to be a monster hit.